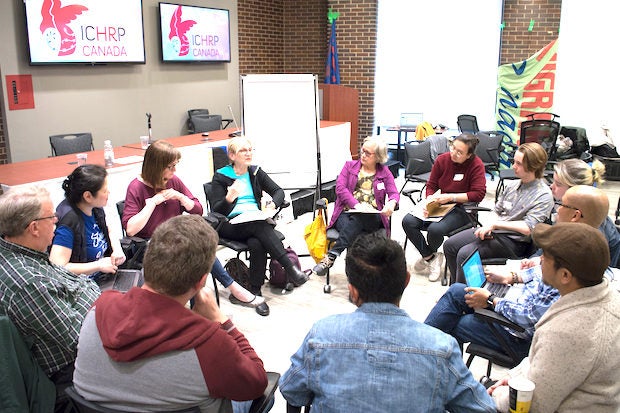 Some delegates at the ICHRP-Canada launch in workshop to discuss the human rights situation in the Philippines. INQUIRER/Jhong de la Cruz

More than a hundred community leaders from cities across Canada gathered at the Public Service Alliance of Canada (PSAC) headquarters in Ottawa on May 11 and 12 to launch the cross-country network.

The formation of ICHRP-Canada was led by several years of campaigns involving the implications of Canadian foreign aid and investment in the Philippines, the spate of killings and enforced disappearances and the call to release political prisoners under Pres. Rodrigo Duterte.

A conference before the group launch presented speakers from abroad, including Rev. Marma Urbano, who shared her personal story depicting the violence faced by community leaders and human rights advocates.

Local rights abuses in Panay Island in central Philippines involving landlords and sugarcane workers were recounted by Ruth Fe Salditos, one of the founders of Panay Fair Trade Center and a fair trade activist.

“In the Philippines, if you’re not a Duterte supporter, you’re either a protector of drugs or a communist. If you criticize, if you resist, if you stand in their way, they will get you out of the way,” he said.

In a November 2018 report, Canada’s House of Commons’ Standing Committee on Foreign Affairs and International Trade urged the Canadian government to review its relationship with its Philippine counterpart in light of “growing authoritarianism”.

For its part, ICHRP Canada has filed an access to information request before the Canadian government to find out how much military aid its government provides to the Philippines government.

In 2018, members of the group were involved in urging the government to reconsider sales of helicopters, in light of growing human rights violations under Pres. Duterte government.