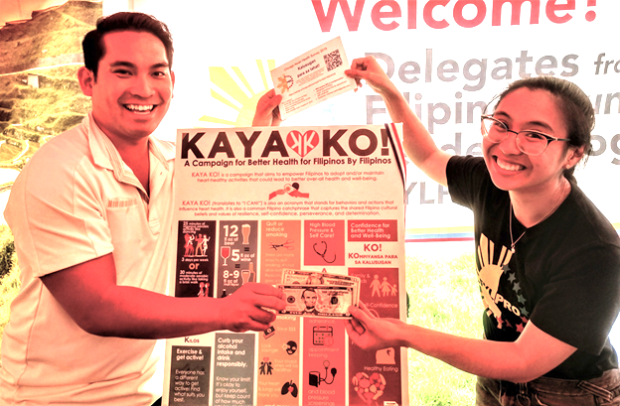 The collected health data will be given to the Chicago Department of Health, which in turn will inform Chicago Mayor Lori Lightfoot’s health policy agenda.

Dr. Melissa Palma of the Filipino Young Leaders Program (FYLPRO) decided to spearhead the outreach efforts because of the health inequities she has seen in her practice as a family medicine physician at the Logan Square Health Center at Cook County Health and Hospitals System in Chicago.

A daughter of immigrant parents who are also physicians, Dr. Palma has been aware not only of the importance of surveys, but also the barriers in recruiting Asian Americans to participate in any health research or survey.

Asian Americans have one of the lowest rates of recruitment and participation in clinical trials. AHC reported that in 2016, only 30 Asian Americans were counted in the Chicago’s health census.

According to Palma, the Filipino community was completely underrepresented to the organizations which grant health program funding throughout the Chicagoland area.

“As many of us know, Filipinos have alarmingly high risks for cardiovascular disease and diabetes,” Palma said. “Using the World Health Organization recommendation for BMI cutoffs for Asian groups, being overweight is defined as having a BMI of over 23 kg/m2 compared to BMI over 25 for the general population. In one study, as many of 60-80% of Filipino Americans are overweight or obese.”

According to National Institutes of Health, disparities are differences in the incidence, prevalence, mortality, and burden of diseases and other adverse health conditions that exist among specific population groups in the United States.

Americans have enjoyed improved health and longer lives during the latter part of the 20th century into the 21st century. However, African Americans, Hispanics, and Asian Americans and Pacific Islanders (AAPIs), who represent more than 25 percent of the U.S. population, continue to experience striking health disparities, including shorter life expectancy and higher rates of diabetes, cancer, heart disease, stroke, substance abuse, and infant mortality and low birth weight.

Health disparity persists in the Filipino community because of barriers, most common of which are language, stigma, and access to more culturally competent healthcare services.

In 2016, the Center for Asian Health Equity (CAHE) reported that more than 65% of Filipino Americans are foreign-born, and therefore language barriers still exist. This barrier can lead to miscommunication between the Filipino patient and the physician. The physician’s ability to diagnose and treat the patient is limited if the patient cannot effectively communicate her health conditions and symptoms.

The report also said that heart disease and diabetes are also common in the Filipino community. This is contrary to the model minority misconception that presents the view that Asians are generally well-off and educated and therefore do not have major health problems. One in three Filipinos will die of cardiovascular disease.

Palma also said, “Despite such high risk for heart disease and diabetes, Filipinos have been an underrepresented in the surveys that provide information about the health status of the community, especially in the Midwest. Focus group findings also indicated that Filipinos generally do not maintain healthy eating habits, engage in regular physical activity, or routinely access preventive health care.”

Data from the survey will be critical in developing effective solutions and health programs that will increase physical activity, improve nutrition and nutrition literacy for the Asian American communities.

Any Filipino adult over the age of 18 living in the Illinois zip codes 60001 through 62999 will be compensated $25 for filling out a complete 2019 Chicago Asian Health Survey.

The online survey takes about 30 minutes to complete and asks questions about how often you go to the doctor, ability to access health insurance, and any chronic medical conditions you may have. It can be found at https://is.gd/ChicagoAsianHealthSurvey

Palma calls on the community to spread the word and participate in the survey. She said, “We need to ensure our kababayan get counted! If you take the survey yourself, please help a tita or tito or your lola or lolo fill out the survey as well. We want to ensure all members of the community are represented, not just youth with smartphones. If we all work together, we can ensure Filipinos can enjoy longer and healthier lives as empowered participants in their health.”