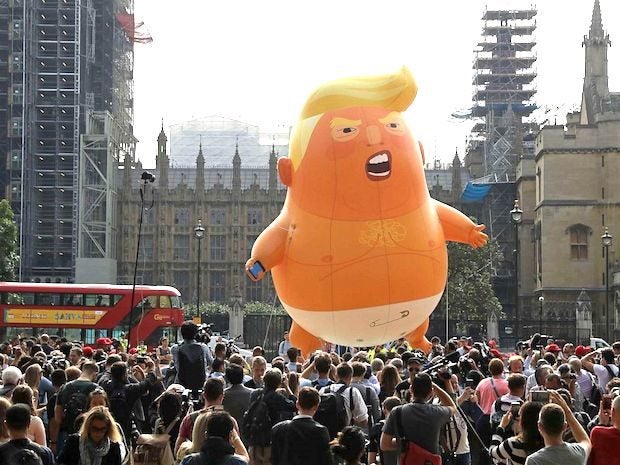 While Donald Trump is in England as our country’s Republican standard bearer, acting like a horse’s ass, you know the Brits are simply being nice and civil the way you’re supposed to with people you can’t stand. Unofficially.

That’s the value of that stiff upper lip stuff. It’s the only logical and civil parry to “Trump and Circumstance” as it powers through Europe to D-Day.

Trump as usual brings his own war to the party. He rubs it in on Brexit, which he sees as having Trump DNA to the point where it’s practically his illegitimate child. He meets with the outgoing Theresa May but refuses to give facetime to Jeremy Corbin. He lies nastily about Meghan Markle despite all the video and audio to the contrary; he chooses to insult the South Asian mayor of London who rightly casts Trump as antithetical to the values of western democracy.

There’s always higher ground, right? But not for Trump the international twitterer.

What the hell. Being a boor isn’t an impeachable offense, but the dude is acting on your behalf, and I’m sure you—yes, you dear reader—would be a much more mindful, qualified and respectful representative than the former reality star.

But why be upset about what Trump is doing to the future of European relations as he gracelessly bounds through the ceremonies. We know what ceremonial Trump is like domestically in our own county.

In the U.S., those out of democracy’s mainstream, the de facto disaffiliated and the unempowered, are honored each year with their own ceremonial month.

It’s all a bit of window dressing in honor of diversity  that allows  detractors to at least acknowledge our existence for a month.

For June we’ve segued into LGBTQ Month, and before he left Trump was already at his ceremoniously despicable.

“As we celebrate LGBT Pride Month and recognize the outstanding contributions LGBT people have made to our great Nation, let us also stand in solidarity with the many LGBT people who live in dozens of countries worldwide that punish, imprison, or even execute individuals on the basis of their sexual orientation,” Trump wrote with a straight face.  “My administration has launched a global campaign to decriminalize homosexuality and invite all nations to join us in this effort!”

Is this the gaslight of gaslights, where Trump turns into his own utility company?

This is the president who was criticized for refusing to recognize Pride Month in 2017 and 2018.

Maybe he needs to do all this now because he fears Buttigieg and the Log Cabinites?  Or maybe it’s necessary after Trump has worked so hard to erode non-discrimination protections for the LGBTQ community in health care, housing and employment.

Not to mention his efforts to erase transgender people out of existence.

So, thank goodness it’s Pride Month, when Trump gets to put on the stiff upper lip and act like he likes every person at the parade.

Judging from his LGBTQ policies,  Trump, the man from Queens, isn’t really much for queens, no matter what month it is.