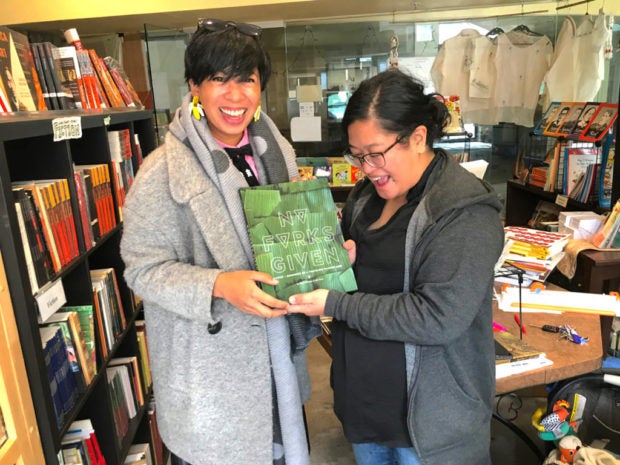 Yana Gilbuena delivering her new book ‘No Forks Given’ to Arkipelago Books co-owner, Lili Prijoles before the book launched in April 2019. (| PapaLoDown Agency)

There are only two bookstores dedicated to Filipino literature in the United States, both in California: Philippine Expressions Bookshop in San Pedro and Arkipelago Books in San Francisco.

Named after the Philippines’ group of islands, Arkipelago Books sits inside the Bayanihan Community Center in the heart of the South of Market (SOMA) Pilipinas, the 10-block Filipino Cultural Heritage District in San Francisco.

The bookstore, a pillar of the San Francisco Fil-Am community for over 20 years, continues to live on through its current second-generation owners, Lily Prijoles and Golda Sargento, after original owner Marie Romero retired in 2017.

The roughly 400-square-foot space that the bookstore occupies on the ground floor of the community center is filled with shelves of comics/graphic novels, cooking and food books in the center, history and social science, fiction, new releases and a section for children and Tagalog language books.

Prijoles, who grew up in San Diego but studied film at Academy of Art in San Francisco, recalls coming into Arkipelago to learn about Filipino literature and history. After spending about 10 years in San Diego to run her parents’ restaurant, Prijoles moved back to the Bay Area and was presented the opportunity to continue the shop’s legacy, alongside Sargento, a songwriter and performer who had experience working for a publishing company. The two Filipina Americans had previously worked together at Eighth Wonder, a spoken word arts collective.

“Golda and I took over the bookstore to further the legacy and what it did because a lot of people told us that the bookstore couldn’t close and that we needed to do something,” Prijoles said.

One of the biggest hurdles two years ago was letting the community know that the bookstore was still around, through outreach to college students, the local community and off-site events like Pistahan Festival. These events have also attracted new Filipino customers who didn’t even know such a bookstore existed in the city.

Sargento typically reads upcoming releases that will find their way into the bookstore or Prijoles will find new books from the Philippines to bring back; but most of the inventory decisions come from customers’ demands.

Almost every month, Arkipelago has book signings and readings with various Filipino and Filipino American authors, either at the community center or at another site in the area. 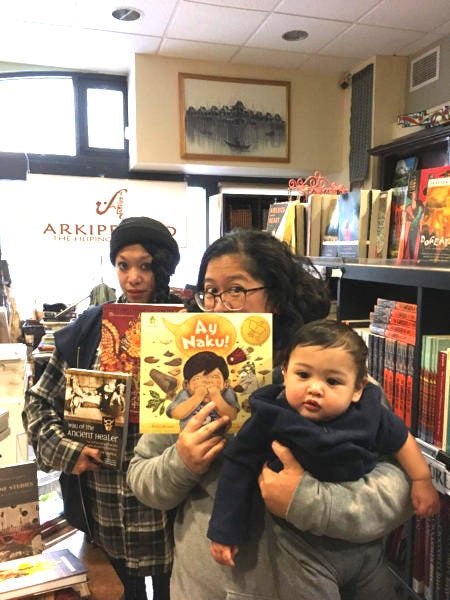 A main goal in the transition was to also bring the bookstore into the digital age and to connect to other consumers outside of San Francisco.

“It was mainly the online aspect that became stronger when we took over. We streamlined and made it easier to purchase things from the bookstore and for it to be connected to the inventory we actually have,” Prijoles said.

With other online book retailers like Amazon that may be seen as competition, Sargento said, but some customers who discover new Filipino books on Amazon go to Arkipelago to actually purchase them.

“In some ways, Amazon is a resource for our audience who would otherwise not know about that book in the first place,” she said.

Currently, a lot of its online orders come from the East Coast, which is encouraging.

“Being online also helped us contextualize what Arkipelago is to the community. Both Lily and I shopped here before we were even thinking about owning it, so it’s always been in our minds, but as a community foundation business, it’s a big deal,” Sargento said. “We have regular customers from out of town who make sure to come and see us.”

Some of the best-sellers in the past year have been Elaine Castillo’s “America Is Not the Heart”; “Journey for Justice” by Gayle Romasanta and the late Dr. Dawn Mabalon; “Pulutan! Filipino Bar Bites, Appetizers and Street Eats” by Marvin Gapultos; “I Am a Filipino: And This is How We Cook” by Nicole Ponseca and Miguel Trinidad; and “The New Filipino Kitchen: Stories and Recipes from Around the Globe” edited by Jacqueline Chio-Lauri. 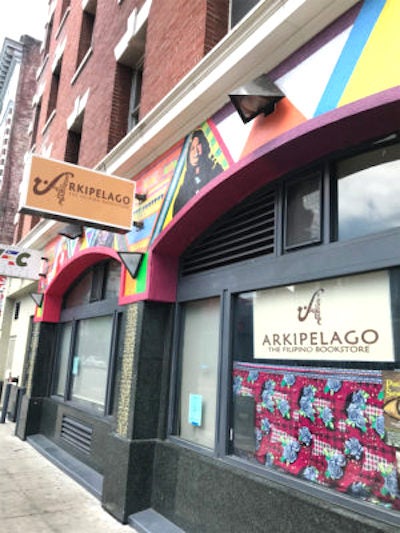 Arkipelago Books is located inside the Bayanihan Center, in the city’s Filipino Cultural Heritage District; SOMA Pilipinas. The front of the building was recently decorated with a mural to celebrate Filipino culture and Filipino American heroes, including historian, author, and educator Dr. Dawn Mabalon. (| PapaLoDown Agency)

Other trends in consumer choices that the bookstore has noticed include books about Filipino mythology, pre-colonialism in the Philippines and bilingual books that parents and their kids can learn from.

“Most of the time people don’t know what they want or just want to look around. It’s a lot of talking to people and getting a feel of what they are interested in or want to learn more about. Sometimes people will sit here for an hour and we’ll chat about their lives,” Prijoles said.

Both Prijoles and Sargento have ambitious plans for Arkipelago, such as launching a subscription service with a new book each month and becoming more of a network to connect Filipino readers and writers.

“The bookstore being what it is, is a place where Filipino and Filipino American and Philippine international books go. It’s a really interesting position that we’re in. The diaspora is so massive, yet connected through online,” Sargento said.