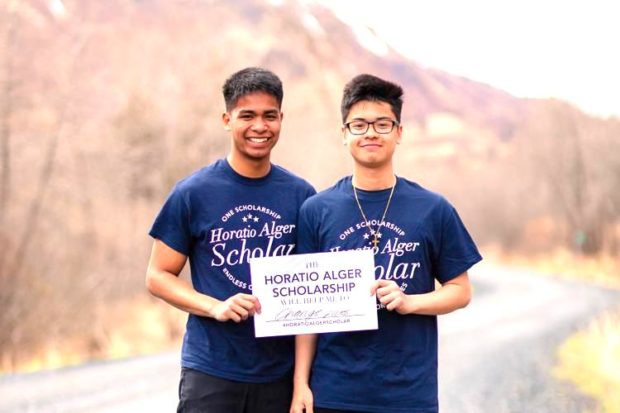 Felino Macatuno and Rafael Bitanga will each receive $10,000 over 4 years from one of the United States’ largest need-based college scholarship programs. CONTRIBUTED

Felino Macatuno and Rafael Bitanga will each receive $10,000 over 4 years from one of the United States’ largest need-based college scholarship programs.

The program specifically assists high school students who have overcome great obstacles in their young lives, Bitanga explained in an email to the Kodiak Daily Mirror.

While many programs are based primarily on academic achievement or leadership potential, the Horatio Alger Association seeks students with financial needs but who have exhibited determination, integrity, and perseverance in overcoming adversity.

Macatuno and Bitanga noted that the Horatio Alger Scholarship is not a well-known to many students mostly because of its early deadline; the application opens on August 1 and closes on October 25.

Macatuno, who will be going to the University of Idaho study computer science, told the Kodiak Daily Mirror that he is most motivated by his mother and two sisters Honey Rose, and Angelika. “The application process enabled me to reflect on many aspects of my life including my single mother’s experiences, what it means to be a student athlete, and how the people around me in this close-knit community helped me grow into the person I am today.”

Bitanga and Macatuno have lived in the same neighborhood since the former arrived in Alaska in 2009. They attended the same elementary school and their parents both worked at one of Kodiak’s canneries.

“Winning this prestigious scholarship, especially with two students from an island off of nowhere, shows that our zip code should not and does not define our future,” Bitanga told the Kodiak Daily Mirror. He will be going to Cornell University in New York to begin his classes in hotel and business administration.