And in one of several open challenges to current White House policies, Newsom highlighted his recent pardoning of two Cambodian immigrants, Kang Hen and Hay Hov, thereby gutting the federal case for their immediate deportation.

He also warned that the Trump administration’s deportation focus was expanding beyond the Latino community that’s at the heart of the border wall controversy. 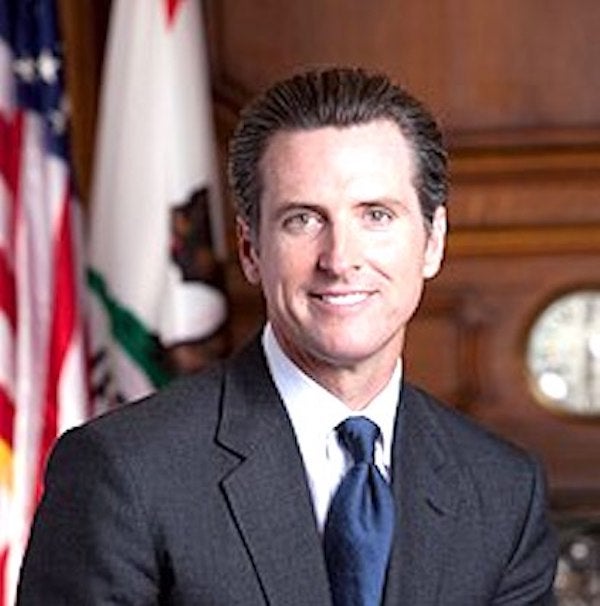 “Healthcare is front and center in the national discourse,” he said, “ever since the vandalism of the Affordable Care Act,” also known as Obamacare. And homelessness, growing by double-digit percentages up and down the state, according to the most recent accounting, released just last week, is “an out-of-control abomination, simply getting worse,” the governor said.

Worse as in 43% increases in Alameda and Orange counties, and 64% in Bakersfield’s Kern County, the governor noted.

“I don’t want to overpromise that we can turn this around overnight,” he warned, but his proposals represent “the most robust homeless investment the state has ever made.”

Similarly, he said, the housing situation is “deeply complex. It’s taken us decades to get to this point.” The governor lambasted the state ranking 49th out of 50 when it comes to building new housing units (behind only Utah) last year and said, “We have got to get serious.”

So he’s pressuring the most laggard communities, such as Huntington Beach, where no new housing was constructed, and generally using the “carrot and stick” approach on 49 other municipalities that haven’t done enough.

The 77,000 new housing units built in the state last year, he said, is “not even close to where we need to go.”

And to slow that abominable growth in homelessness, Newsom had more than a billion dollars’ worth of proposals, including: $275 million to 13 counties and $275 million more to 13 cities with the most challenging homelessness circumstances. These would go to such things as rapid rehousing programs, hotel conversions, navigation centers, workforce training and mental health programs.

“If you believe in universal health care, then you believe in covering everybody, regardless of immigration status,” he said. His plan would extend coverage to 2.5 million undocumented Californians, including 463,000 members of the Asian Pacific Islander community, he said,

In detailing his intentions, the governor argued that, in the long run, beyond the humanitarian or moral justifications for dedicating hundreds of millions to foster housing construction and homelessness prevention and re-establishing the health care individual mandate, the state will save money, too.

For instance, by enrolling everyone in Medicare, he said, including undocumented immigrants, the state would realize savings on the most expensive health care it provides: emergency room care to those who have no insurance.

“We’re already spending the money,” he said. “We pay a fortune in the emergency room for the undocumented.”

But he envisions other cost-savings too.

“One of the most significant things we are doing in the budget,” he said, is being able to save $400 million annually from the $13.5 billion spent on pharmaceutical drugs by leveraging the state’s purchasing power and implementing bulk purchases.

For another example of anticipated cost savings by expanding Medicare, Newsom pointed out how, subsequent to the elimination of the individual mandate, there was a 9% jump in insurance premiums. But not in Massachusetts, where the individual mandate is still in effect and worth about a 5% difference in premium costs, he said, citing Peter Lee, of Covered California.

The Affordable Care Act’s individual mandate requirement was removed as part of the GOP tax bill that passed in December 2017.

In response to a question from the media, Newsom confirmed that veterans would come in for considerable benefit through the housing and supportive services he’s proposing.

In response to another question, he praised state Attorney General Xavier Becerra and San Francisco City Attorney Dennis Herrera for their support of “sanctuary” status in their jurisdictions, reiterated his own long-standing support for such policies and expressed skepticism that those policies will ever cost the state federal dollars.

Citing a recent court victory against Trump proposals to redirect state resources to what Newsom called the “fake emergency” border wall, Newsom also stated his intention to fight for immigration reform, hopefully in conjunction with other border-state governors.