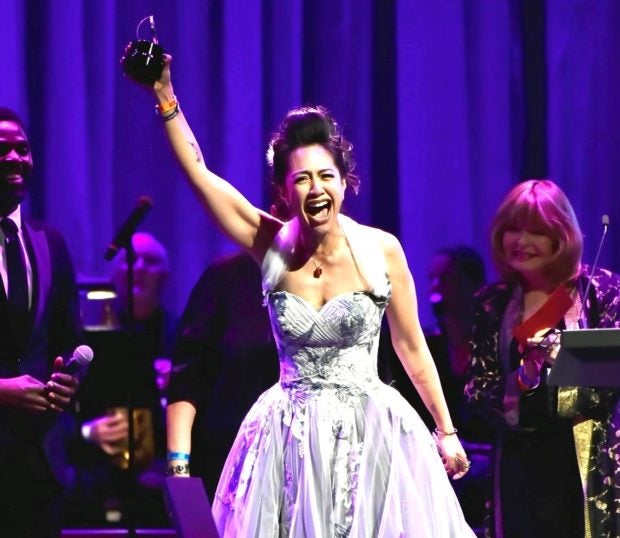 WASHINGTON, D.C. — Filipino American actor Regina Aquino has won the 2019 Helen Hayes Award for Outstanding Lead Actress in a Play for her work in Theater Alliance’s production of “The Events.”

The ceremony was held at The Anthem performance venue. Now in its 35th year, the awards are given out by the TheatreWashington organization and recognizes outstanding achievement in more than 90 professional theaters across the Washington metropolitan area. It is named for the Washington native and actor Helen Hayes.

In her acceptance speech, Aquino said, “To win this during Asian Pacific Islander Heritage Month, as a Filipino American … I am so proud to be from DC!”

Aquino played the character Claire in the play written by David Greig. The lone survivor of a mass shooting, Claire yearns to find the compassion, understanding and peace that she needs to overcome her trauma, but thoughts and visions of the shooter haunt her every step.

Staged during fall last year and directed by Colin Hovde, Aquino acted opposite Josh Adams for 80 minutes without intermission in each performance.

“The role of Claire wasn’t written as an Asian,” she continued. “But it was enriched by my ethnicity. Colin cast me as an American in a play that examines white supremacy, toxic masculinity and the plague of mass shootings.

“I hope that this play was a call to action—as it was for me—for all who witnessed it.”

“We must end gun violence,” she said, to cheers and applause from the audience. “We must combat toxic masculinity with love. We must dismantle white supremacy. And it begins here in the theater. We can all do it! Salamat, salamat.”

To celebrate, Aquino says she danced at the awards party. “Then we went to an after party at our favorite theater bar. We got pretty hungry, so we went to a diner.

“I spent the entire night with Colin, Josh and Kat, my Theater Alliance family, and it was so amazing to be with them.” Aquino in a scene from “The Events” staged by Theater Alliance. CONTRIBUTED

It was business-as-usual the following day. “I was out very late, went home to sleep for a few hours, then went in to rehearsal at noon.”

Aquino became involved in “The Events” when she and Hovde, whom she considers a good friend and longtime collaborator, were working together in a show at the Lincoln Center in New York.

“It began like all the greatest adventures, at 2 a.m. in a dive bar in Hell’s Kitchen. We were trying to come up with the next project to collaborate on, knowing it was going to be his last season as Artistic Director at Theater Alliance.

“He told me about ‘The Events’ and I told him I didn’t care about the details, I was in.”

Aquino recounts the preparations the entire team undertook for the production. “There was a lot of dramaturgy on trauma survivors, mass shooting survivors and how they process grief and loss.

“We also had a shooting survivor in our choir, so there was firsthand knowledge on the terror experienced in a mass shooting.”

She adds that the rehearsal process had been “very sobering, very painful, but it led to a very truthful and necessary performance. We wanted to ensure that the play was visceral for those witnessing it.”

“While the subject matter was very somber, we all cared so deeply about the play and how it forces the audience to confront the tragedies we seem to be experiencing in America every day.”

Despite the serious subject matter, they also always tried to fill their work with hope. “Our choir rehearsals were such fun, the choir had fantastic voices and one of the songs they sung was Gnarls Barkley’s ‘Crazy.’”

“Rehearsing that was such a joy. I really loved every minute of working with this team.”