NY immigration lawyer was a child street vendor in Davao

NY immigration lawyer was a child street vendor in Davao 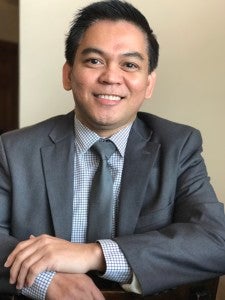 Atty Nick Caraquel was a breadwinner at the tender age of nine as a banana-cue vendor at a bus terminal in Davao City. INQUIRER/ Elton Lugay

NEW YORK—Like countless Filipino immigrants, Elmhurst, New York-based immigration lawyer Nick Caraquel dreamed about coming to America to provide for his family. But unlike many of his peers, he became a breadwinner at the tender age of nine as a banana-cue vendor at a bus terminal in Davao City.

“When I was six years old, my father would hit me in my sleep every day at 4 o’clock in the morning,” Caraquel told INQUIRER.net.

He was beaten up not because he had done something wrong, but “I had to get up in order to help my mother prep for our barbecue vending.”

His father was a barber and his mother, a seamstress. But since there were seven of them siblings, the parents’ meager income was never enough.

“I would walk to the bus terminal to collect used barbecue sticks from the ground and wash them clean because we could not afford to buy a fresh set,” Caraquel said.

Meals of rice and cassava

At dinnertime, the family would gather around a pot of steamed rice mixed with cassava. Nothing else was on the table, except during birthdays and Christmas—rare occasions when the family could enjoy fried chicken and fruit salad. Eating three times a day was rarer still; it happened only in his dreams.

Three years later, Caraquel was asked to quit school because his parents could no longer afford it. Instead of attending class as a Grade 4 student, the mentally gifted boy was sent to the bus station to grill and sell banana-cue.

“I was so angry at my parents then,” he said. “I also asked God why I am poor, why I had to stop school.” Standing tall at the 2012 oath-taking ceremonies in Albany, N.Y. Successful examinees included only three from the Philippines at the time. CONTRIBUTED

He was furious, but never hopeless. And when the opportunity came to work at a neighbor’s grocery store, he grabbed it without hesitation. As a working student, elementary and high school flew by fast yet he managed to finish with salutatorian honors.

But according to Caraquel, it was no cause for celebration in his family. “It was not because they weren’t proud of me, but I guess they don’t have a clear grasp of the value of academic achievement, so I just ignored it,” he said.

Caraquel continued working hard in order to complete his education. Knowing that his family was poor, he took the state scholarship exam and eventually passed it with flying colors. It provided full scholarship, making him one of the first few recipients of such state funding awarded to only one student per region.

One would think that life would have become easier for the struggling Caraquel. Not really. For the next five years as an industrial engineering student at the Ateneo de Davao, his dream of having a better life still seemed elusive. At nine years old, Nick Caraquel was asked to quit school because his parents could no longer afford it. Instead of attending class as a Grade 4 student, the mentally gifted boy was sent to the bus station to grill and sell banana-cue. CONTRIBUTED

“I remember going to class with an empty stomach,” an emotional Caraquel told this reporter. “My professor would call me during recitation and I would just look at her with my mind wandering elsewhere.”

Because his scholarship had a grade quota, there was no chance for him to work while studying. By then, his older siblings each had families to take care of and their mother had become sickly.

When things got worse, his classmates stepped up to the plate and did their best to help him survive. “They would invite me to eat lunch with them for free and in exchange I would help them with assignments and tutorials,” Caraquel recalled.

He went on to brave the odds, graduated from college in 1996 and was immediately hired by San Miguel Corp. as a regional production planner based in Cagayan de Oro. In less than two years, he was pirated by Nestlé Philippines, where he stayed for the next 10 years. It was while working at Nestlé that he pursued his dream of becoming a lawyer. He would go to work at daytime and attend classes in the evening.

In 2004, he passed the bar exams and six years later, immigrated to Kentucky to become the head of Nestlé’s industrial engineering department.

His ambition did not stop there. He continued to work hard and save enough money to prepare for the bar exams in New York to eventually become a practicing lawyer. This, while he was still connected with Nestlé.

By 2012, he had successfully passed the bar, but it was not until four years later that he left Nestlé in order to become a full time practicing immigration attorney in Queens, New York.

Caraquel said he has successfully handled over 100 immigration cases from clients of diverse ethnicities.

When asked why he chose to support his family despite the harsh treatment received from them, the never-been-married attorney replied in tears, “Because I cannot afford to see them suffer, I love my family in spite of everything.”