In defense of Filipino expatriates

In defense of Filipino expatriates 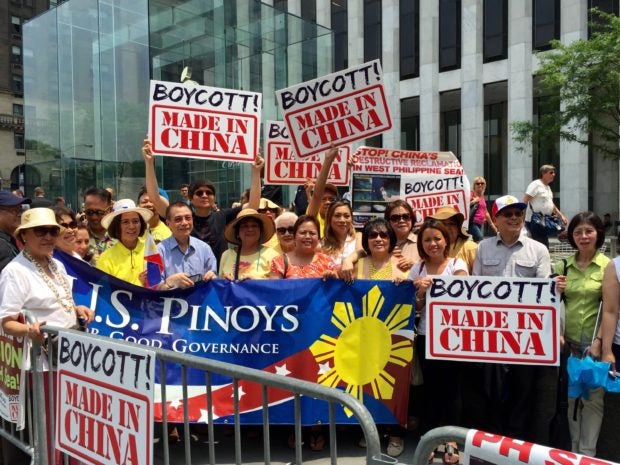 A demonstration in New York against China’s incursions in the West Philippine Sea/South China Sea: Filipino expatriates are often criticized for expressing their views about Philippine issues. INQUIRER FILE

When Filipino expatriates express shock and dismay at the state of affairs in the Philippines, they are often dismissed. When they point to the insanity of President Duterte’s barbaric drug war, the unjustified summary executions of thousands and the consequent plight of over 100,000 widows and orphans, their voices are drowned in ad hominem arguments, to wit:

Who are these Filipino expats who should be barred from Philippine politics?

Wikipedia defines expatriate (or expat) — the word comes from the Latin ex and patria (“out of the fatherland”) — as “a person temporarily or permanently residing in a country other than their native country.  In common usage, the term often refers to professionals, skilled workers, or artists taking positions outside their home country, either independently or sent abroad by their employers . . .the term ‘expatriate’ is also used for retirees and others who have chosen to live outside their native country. Historically, it has also referred to exiles.”

Expatriates include immigrants, migrant workers and refugees who seek better and safer havens abroad, as well as missionaries who voluntarily serve in other countries.  In 2013, the United Nations estimated that 3.2 per cent of people lived outside their native country. In the Philippines, around 10 million out of a total of 105 million or about 10% of Filipinos live and work abroad.

Should 10 million Filipinos keep their lips zipped about the wrong turn their native land has taken?

Let’s review the case for expatriates.

1) State-sanctioned killings are a moral, not a political matter.  The objection against EJKs is ethical, rather than political.  No one questions the need to solve the drug problem nor the government’s aim to protect its citizens and ensure peace, order, and security. The objection against EJK is that the methods (e.g.,  Operation Tokhang) used by the Duterte administration violate basic human rights guaranteed by article 3 of the 1987 Philippine Constitution. These are the same rights guaranteed by international tenets such as the Universal Declaration of Human Rights ratified by the United Nations General Assembly on December 10, 1948.

2) The Neanderthal charge that expats are ignorant and clueless as to what goes on in the Philippines is antiquated.  These arguments do not hold water in the age of Facebook, Instagram, Twitter, 24-hour news streaming, etc.  Turn on your computer, iPhone, TV, etc. and you instantly access news reports anywhere around the world. At the time of Ferdinand Magellan, the geographical argument could be advanced, but not in 2019.

3) Fulton J. Sheen once said that moral principles do not depend on a majority decision. The majority of the Philippine electorate may have voted Duterte into office in 2016. No one questions the validity of that election.  But critics (whether residing in or out of the country) certainly have the right to question the morality of summary executions based on arbitrary “narcolists.” Is the PNP’s modus operandi of branding thousands of deaths as the consequence of “resisting arrest” credible?

4) The “mind your own business” dismissal seems nothing more than masked insecurity. This is a fall back argument used by individuals who cannot articulate their premises or defend their conclusions. “Shut your mouth” is the favored statement by those who prefer to keep their brain cells in hibernation.

5) Government apologists who persist in their warped perception that those who have ventured beyond the borders of their country have somehow transmogrified into aliens, having filtered every ounce of patriotism from their blood, have simply not looked closely into the expatriate experience. For one, they have forgotten the classic phrase “absence makes the heart grow fonder.”  Most Filipino expatriates in fact have left their hearts not in San Francisco but in their respective islands in the Philippines. How else to explain the fully booked daily flights from San Francisco, LAX and other international airports?

A reading of some of the writings of Carlos Bulosan may dispel such misconceptions. Bulosan left the Philippines at age 17, joining the throngs of workers who migrated to America in the 1930s, taking low paying jobs as farmhands and dishwashers. Bulosan’s autobiographical America is in the Heart is heartbreaking, as Carlos poignantly narrates his experience of sleeping inside dingy bodegas or the backrooms of Chinese restaurants  because discriminated laborers like him could not afford shelter.

Listen to Bulosan and peek into the heart and soul of this expatriate: “I remembered all my years in the Philippines, my father fighting for his inherited land, my mother selling baggoong to the impoverished peasants. I remembered all my brothers and their bitter fight for a place in the sun, their tragic fear that they might not live long enough to contribute something vital to the world. I remembered my own swift and dangerous life in America. And I cried, recalling all the years that had come and gone, but my remembrance gave me a strange courage and the vision of a better life.”

6) The plea to return to the Philippines to help build its future is valid, though help from abroad, whether through remittances, foundations, scholarships, medical missions, etc. do make a dent.  It is a siren call that every expatriate hears and has given considerable thought.  Filipinos have left (but not abandoned) their country compelled by circumstances variably related to academics, economics, politics, art, science and sundry other things. Or simply by the need to reunite families. Most expatriates straddle the fence between the Philippines and their adopted country.

I recall meaningful conversations with the late Fr. Tom Green, the Jesuit professor and spiritual director at Ateneo. He was born in upstate New York but had lived most of his life in Manila. He was American by birth but Filipino by virtue of his missionary work. Yet, he could not call himself Filipino because he wasn’t. Nor could he call himself American either. He had evolved to become a creature of “a third culture,” not quite American nor Filipino.

This article cannot do justice to Fr. Green’s insightful idea. Suffice it to say that this “third culture” phenomenon is what likely motivates expatriates to follow events in the Philippines closely, to examine its developments not so much with critical eyes as with compassionate hearts, to grieve at gross errors and to delight at every success, to comment not with condescension but with authentic concern. Being some distance removed from the eye of the storm affords the expatriate a broader and more perceptive view.

7) Do expatriates have the better solution to the ills of the country? Perhaps no more or less than their kababayans. But helping identify problems often heralds half the solution. Diagnosis precedes and defines treatment.

Therefore, the debate ought to be on the wisdom (or insanity) of the drug war, on the justification (or immorality) of extrajudicial killings, on the most effective and humane solution to the drug menace.

A debate on the ignorance and irrelevance of expatriates helps no one.