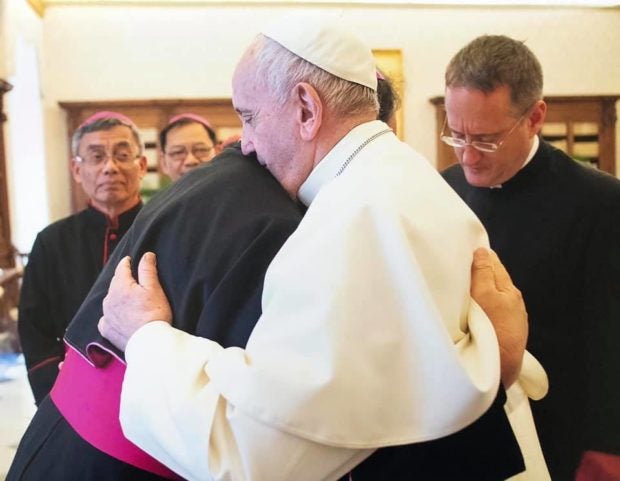 When President Duterte stepped up his verbal attacks against Catholic bishops and priests, and fake news and false accusations were made against them, there was only a tone-deaf response from the Catholic constituency. (At this point in Philippine history, it might be said that Filipino Catholics were timid, cowed into silence, or hesitant to venture into a collective voice. Pity.)

Pope Francis saw a most beautiful monument of “faith and history” in the Manila Cathedral, and yet the highest official of the land saw ONLY the wounded nature of the clergy who were the ones who built the monuments of faith.

When the Filipino Head of State called out the Filipino Church as the “most hypocritical institution,” Pope Francis himself declared that “the noble Church in the Philippines now stands among the great Catholic nations in the entire world” in a letter to Manyo Cardinal Maeda dated November 15, 2018.

He meant every word, power-boosting a frustrated local Church. Last year, His Holiness declared Lucena’s first bishop, Alfredo Obviar, as “venerable,” which means a Filipino bishop is now a step closer to sainthood.

Full of trust and confidence, the Holy Father has put more than a few Filipino bishops as pastoral and spiritual leaders in the global Church.

He appointed Archbishop Bernardito C. Auza as the Permanent Observer of the Holy See to the United Nations (a heavyweight post among papal ambassadors), and Pedro Baquero, SBD, to the Diocese of Kerema in Papua New Guinea.

The pope assigned Archbishop Adolfo Tito Yllana as Apostolic Nuncio to Australia, Alejandro Aclan of Pasay City as auxiliary bishop of Los Angeles, and recently approved the reelection of Antonio Luis Cardinal Tagle as the first Asian President of Caritas Internationalis (based in Rome).

Significance of the ad limina apostolorum. During an ad limina visit last week (together with other bishops from Metro Manila and Northern Luzon), Bishop Ambo David, the persecuted Kalookan prelate, was assured by the Vicar of Christ: “I know your situation. I know what you are going through. I am praying for you.”

Hearing those words, the Bishop David felt paternal love, his eyes blurred with tears, and he needed to clear his throat to speak. Later, he received the most caring embrace of all manly embraces, the papal bear hug. And when the Holy Father told him, “Courage,” it only meant “continue working for the truth.”

So why all this fuzz? Because an ad limina visit confirms that “the Transmission of Divine Revelation… is continued in Apostolic Succession (Catechism of the Catholic Church or CCC, Art 2, 74-79).

Through the bishops, regardless of what the PH President says or thinks, the Catholic Church is the depository of the power of the keys, of opening or closing God’s wellspring of invisible grace through the visible Sacraments (John Paul II, Pastores Dabo Vobis, 15).

An ad limina visit tells the world, with Saint Ignatius of Antioch, “Where the bishop is, there let the people gather; just as wherever Jesus Christ is, there is the Catholic Church.” Accordingly, obedience to His Vicar and His bishops is obedience to Jesus Christ.

Jose Mario Bautista Maximiano ([email protected]) is the author of The Church Can Handle the Truth: Mercy-Healing of Historical Wounds (Claretian, 2017).