The Republic of Being and Nothingness 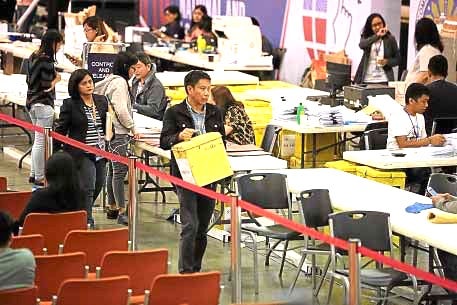 NEW YORK—It’s all over but the shouting.

Of which there has been and will continue to be quite a lot, over the losses suffered by the anti-Duterte opposition, particularly grievous when it comes to the Senate, that until the midterm elections, was the only independent legislative body to serve as a check on Duterte’s retrogressive agenda. A further slide into fascism is inevitable.

From inexcusable deficiencies in the automated voting systems—such as the malfunctioning of almost a thousand vote counting machines resulting in delays, and the conking out of transparency servers so crucial to establishing the integrity of vote count—to massive spending by the administration on electioneering, and the Commission on Elections making a mockery of the party-list system by allowing traditional politicians and their sleek campaign machinery to form organizations that supposedly represent minorities and other marginalized groups, the traditional exercise in democracy was skillfully manipulated to further consolidate, ironically, a further diminution of democratic rights.

Absent a nationwide outpouring of irate citizens onto the streets, Dutertismo is now more firmly entrenched. The poor will continue to inherit the earth, all six feet of it,, the economy will remain stagnant, more people will seek a better life abroad, and the republic will continue its slide towards being  a vassal state of imperial China.

We weep, we gnash our teeth—necessary cathartic exercises—but we also need to reflect on how do the various groups that form the multifaceted opposition learn from this setback. Will we need to wait, as in the Marcos era, more than a decade before the Dutertards are ousted from power?

What’s abundantly clear is the need for grassroots organizing, whether it’s a small-scale social enterprise run by the workers primarily, the strengthening of workers’ rights, funding scholarships for poor but deserving students, or the formation of citizen watch-dog groups at the barangay and municipal level.

Sure, it’s necessary to be active during the elections and campaign for progressive groups, but to only spring into action during the election season is to wait too long. Organizing continuously is time consuming, it is often tedious, but necessary. For the seeds of change to set down roots, flourish, flower, and bear fruit, the ground must be made ready.

It must also be pointed out that the silence from the forces that could have acted as counterweights to the powers-that-be was deafening. The institutional Catholic church and its titular head, Cardinal Luis Tagle, have been missing in action. Beyond individual bishops who rose to the challenge of being responsible shepherds of their flocks, particularly in metropolitan districts with their heavy concentrations of the urban poor who have borne the brunt of the sanctioned extrajudicial killings, the church has been remiss in guarding against the wolves.

Many observers believe that Cardinal Tagle’s tepid response is a sign that he wishes to be considered a successor to the current pope. If this were true, I would think he would take the opposite stance and use his position to condemn in no uncertain terms the use of state violence against its own citizenry. Tagle is no Martin Luther King Jr, he is no Bishop Tutu, he is no Archbishop Oscar Romero.

Where too was the radical underground left?

The refusal of the exiled founding chairman of the Communist Party of the Philippines Jose Maria Sison to condemn the government’s permit in November of 2016 for the burial of the former dictator Ferdinand Marcos’s corpse in the Libingan ng mga Bayani (National Heroes Cemetery) meant he lost what little credibility, if any, he had left. Sison said he had no problem with the decision of Duterte to allow the burial of the late dictator Ferdinand Marcos, as the cemetery did have people buried there who in his view were “traitors and enemies of the Filipino people.” In his estimation, why should one more matter?

Living in exile in The Netherlands since 1987, Sison stressed that Marcos will be buried there not as a hero but as a soldier, conveniently disregarding the fact that even as a soldier Marcos had notoriously falsified his records. The CPP-NPA-NDF that had resisted mightily and bloodily the tyrant, raising a formidable guerrilla army to do so, was now quietly acquiescing to his rehabilitation.

Not coincidentally this was at a time when the armed left and the government were once again engaged in interminable peace talks, that no one believes will ever result in any meaningful results. Sison behaved not as a man of principle but as an opportunist, having more in common with those he inveighed against. In this game of thrones, he and the left he represents were outmaneuvered by Duterte and his minions.