Filipino cited as a hero for teaching math to American kids 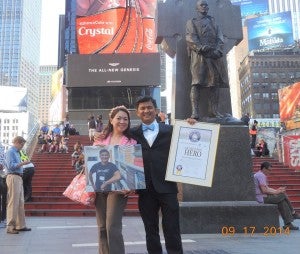 Ramil Buenaventura proudly received his certificate for being a hero in New York City nearly three years ago. No, he did not save anyone from a life-threatening situation. In fact, he did more than that. He became a hero in American classrooms teaching students to solve problems and find solutions; so much like in real life.

Buenaventura of the Renaissance Charter School in New York City took the spotlight at the Edison Ballroom in Times Square on September 17, 2014, as one of the Daily News Hometown Heroes, with ten other educators.

Although recognized for his untiring service to the American youngsters, Ramil, 47, vividly remembers his struggles as an immigrant teacher in New York City. 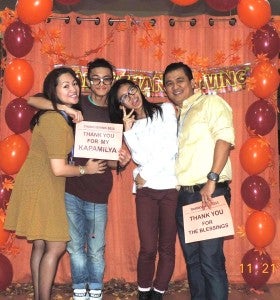 “My students made fun of my thick accent. They laughed behind my back. They made racist jokes about me. ‘Are you a relative of Jackie Chan? Can we order Chinese food?’” Ramil shares.

A master’s in education graduate from the University of the Philippines, Ramil was a middle school math teacher in La Salle Green Hills for 13 years. He was promoted to an administrative position, as Student Activities Coordinator. Yet, he felt the need to immigrate because his siblings already left for Canada.

The growing number of retiring teachers prompted the Department of Education of NYC to take advantage of the influx of immigrants and launch a program called “International Teachers.” There was a demand for English, Science, Mathematics and Special Education teachers from the Philippines, India, Haiti, Jamaica, Canada and other countries.

The Department of Education of NYC hired an employment agency in the Philippines to train applicants in preparation for an actual interview with New York officials. The applicants underwent a three-to-six-month intensive seminar on classroom management, language and culture, subject proficiency and special education.

“To be part of the agency’s pool of teachers, we had to pay a thousand pesos as an initial fee,” Ramil says. After the interview, qualified applicants were offered jobs.

Ramil was one of the 169 Filipino teachers who successfully passed the highly competitive, tedious and expensive process of immigration in 2003-2004. He was given a work visa (H-1B) and flew to New York.

A teacher in New York

Ramil arrived in New York in 2003. The Department of Education chose the school district. However, the teachers have to apply also in different schools of that district depending on school’s needs. Ramil was hired at IS912 in Hollis, Queens. After four years he was transferred to Renaissance Charter School.

Despite being exposed to middle and upper class kids in La Salle which many commonly thought as westernized, Ramil still experienced culture shock.

“Culture was different from what we see on books and movies. We have to be careful as we don’t know if the practice we do in the Philippines is accepted here or not.  For example: I was staring at my students. For the Filipinos it means “makuha ka sa tingin”or they need to behave. All I got is “Why are you lookin’ at me?” What you lookin at?” Ramil recounts.

Despite the cultural differences, aside from the benefits such as insurances, discounts, salary increase and union support, Ramil finds it more satisfying to teach in America because teachers are treated as real professionals. They also engage in leadership trainings available in the district funded by the Department of Education. A teacher can also initiate educational projects that are beneficial to the community. They can partner with the parents and the community leaders in such projects and other endeavors.

“I am in-charge of my classroom and students. I decide what resources to use, grading system to follow, pacing calendar to implement, etc. as long as it will be beneficial to your students,” Ramil explains.

Missing his family was the hardest part of being an immigrant, but Ramil said he could not find a genuine Filipino support group back then because most of them were “plagued with intrigues and talangka (crab) mentality.” Fortunately after seven months his family was able to join him.

“Back home, some people cannot realize that we also have bills and financial responsibilities here and that dollars do not just fall from trees,” Ramil laments. 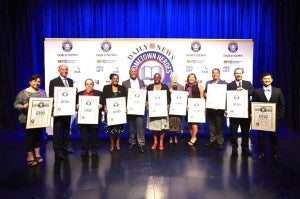 Ramil Buenaventura (rightmost) with other Hometown Heroes in Education on September 17, 2014. CONTRIBUTED

After five years and completing all teaching certifications, the teachers were helped by the Department of Education in acquiring immigrant status through its lawyers. The teachers paid the lawyers’ fees.

The Buenaventuras were granted citizenship in early 2017. In a few months, they will also file for dual citizenship.

Ramil acknowledges the support of his wife, Jane Marie, towards his success in the teaching profession.

“She is my cheerleader and best friend. I accomplished all these with her love and support,” he declares.

Ramil believes that the Philippine government must support Filipino teachers so they wouldn’t have to join the diaspora like him.

“Improve the dignity of your teachers in the public sector. Give them support through a sizeable budget that will benefit the future generations through teacher-training, curriculum development, technology, public school funds and salaries/benefits for teachers and staff.”

As an immigrant he knows the challenges he still faces, but he remains positive.

“We are here for a purpose, so we must make sure to give our time and talent in making this world a better one. We may not be a Pacquiao or a Lea Salonga, but in our own special way, we can show everyone how great Filipinos are.”