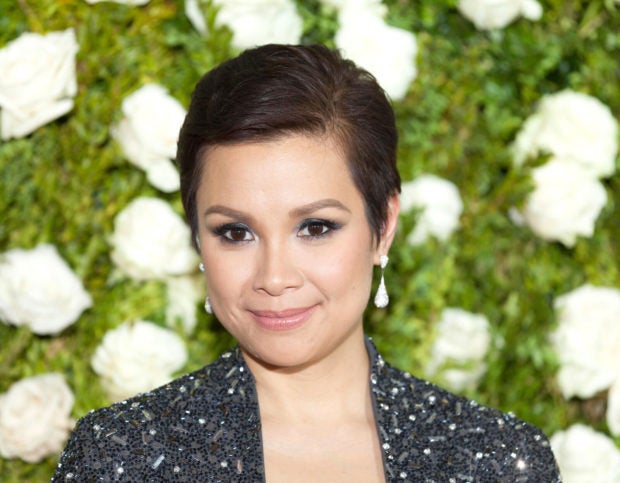 Lea Salonga is performing while recovering from a skiing injury. STUBHUB

CHICAGO—”I was able to stand [without support] for an entire song!” Lea Salonga announced excitedly during a concert to a sold-out audience at the Copernicus Center in Chicago on May 10 after her first song.

Since breaking her leg in January during a skiing trip in Japan, Salonga has had to cancel concerts, perform while sitting in a wheelchair, and then lean on crutches for support. She wears a leg brace and knee support under her gown and wears sneakers onstage.

“Having to cancel concerts was heartbreaking for me. Returning to work has been tremendously fulfilling and I’m thankful that I’m healthy enough to be back,” she wrote in her article “Tour Life” for her Philippine Daily Inquirer “Backstory” column.

Salonga’s love of singing has outweighed the hardships of recovering from a broken leg. Walking onstage, she received appreciative hoots and applause and one person shouting “I love you!”

Impressed by their energy she retorted, “We have a live one [audience] here! This will be enjoyable.”

Lea has been courageously sticking to her performance commitments of her 2019 “Human Heart Tour” across 25 U.S. cities.

“I am already on my second leg of the tour,” she explained to the crowd.

In her April PDI article “Back on the Horse,” she admitted that performing while injured was “terrifying” to her in this “uncharted territory despite having stood onstage for what seems like thousands of times worldwide.”

However, she has learned to chart these territories gracefully without complaining.

Salonga sang Broadway hits such as Hamilton’s “Burn” and “I Dreamed a Dream” from Les Miserable. She also sang the much-anticipated Aladdin’s “A Whole New World,” including renditions of her favorite classic songs.  She starred recently in the musical “Yellow Rose.”

One of the oldies she sang was Carole King’s “Will You Still Love Me Tomorrow,” which she said her mother always asks her to sing for her.

Salonga is the first woman of Asian descent to perform as Epinone and Fantine in Broadway’s “Les Miserable.” In Broadway’s “Allegiance,” as one of the principal cast members, she performed “Higher.” She is a Disney Legend who utilizes her soprano range for the singing voices of Princess Jasmin from “Aladdin” and Fa Mulan in “Mulan” and “Mulan II.”

She is also a Tony-Award and Olivier winner for playing the role of Kim in the West End’s and Broadway’s “Miss Saigon.” In 2017, she released her album “Blurred Lines” prior to a sold-out run in New York’s renowned Feinstein’s/54.

She is one of the best-selling Filipina artists of all time, selling 19 million albums worldwide. Gawad Kalinga raised $2,000 from selling Lea Salonga concert tickets. They are at her concert on May 10 in Chicago. (Photo credit Jean Gavina)

Lea has one daughter, Nicole, with husband, Robert Charles Chien, a Chinese-Japanese entertainment managing director, to whom she has been married to since 2004.

Near the end of the concert, Lea asked the audience for volunteers to come on stage and sing a duet with her of “A Whole New World,” which she does in every concert.

Not wanting to settle for just anyone, she reminded, “I need someone who can sing good.”

Audience member Hilford Bacala ran up onto the stage excitedly to which Lea replied, “I haven’t called you to the stage yet. I need to think [who to pick] first,” and shooed him away. He was eventually chosen, and was overjoyed with his once-in-a-lifetime opportunity.

Bacala revealed that he had only learned and practiced the lyrics to the song the day before and that he had also purchased his white suit the day before as well. With him and Lea singing from a teleprompter, Lea afterwards gave her verdict that “his singing was good.”

Her parting words were, “I know you all have families and jobs and other obligations to attend to and I am happy that you carved out some time from your busy lives to see me,” she said appreciatively. Her last concert for the Human Heart Tour will be on May 25.