It’s typical for their offices to see a large influx of taxpayers seeking assistance as the April 18th filing deadline approaches, according to Abrazar Chief Operating Officer Mario Ortega. However, despite the late surge, he says a noticeably smaller amount of the low-income households they serve are submitting their taxes this year.

“We know we’re going to be down about 10 percent this year,” says Ortega. “We know it’s not our capacity.”

Official statistics for this year have not yet been compiled; however, Ortega as well as other representatives and volunteers for Abrazar and the United Way of Orange County (UWOC) speculate that there may be at least two separate explanations for the drop in the number of taxpayers seeking out their assistance.

They suggest that their efforts to promote financial literacy and awareness of free online filing tools have empowered many of their normal clients to submit their taxes on their own. 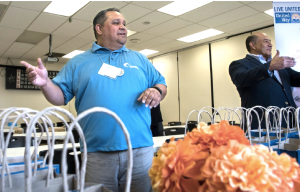 On the other hand, the Trump administration’s crackdown on undocumented immigrants may also be discouraging would-be filers who fear that filing tax information would jeopardize them.

Abrazar serves as one of the UWOC’s Sparkpoints, which offer financial help and education services including credit counseling, career counseling and job placement.

The Santa Ana nonprofit has also been one of the most productive of 40 partners involved in the UWOC’s Free Tax Preparation Campaign.

“The sites that are successful are sites that can garner support from their staff and the volunteers around them, and Abrazar has been amazing at that over the years,” says UWOC Program Manager Livi Kerszenbaum.

Since 2013, the program has saved low-income households about $11.5 million in paid tax preparer services and returned almost $54.6 million in refunds, according to Kerszenbaum.

Volunteer Brandon Coles has been a part of the Free Tax Prep Campaign for the past three years. The accounting and information systems major at California State University in Fullerton says he’s glad to apply his interest in finance to help people.

“It’s one of the ways that .. I can at least contribute something back to the community,” says Coles. The grandson of a Chinese English teacher and a Filipino sailor who fought in World War II adds that “for these communities, every dollar counts.” 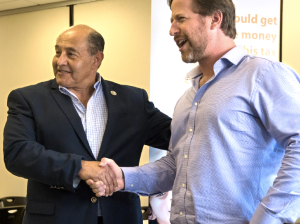 Meanwhile, some of the those who would have normally come to Abrazar for tax assistance may have declined to file this year because they were reluctant to submit information to the federal government.

Amid a push for tighter enforcement of immigration law, some people may be afraid that the documents they turn in could be used to identify taxpayers who are undocumented residents.

Ortega says that, this year, he has encountered a noticeably smaller number of people applying for Independent Taxpayer Identification Numbers (ITIN) so that they can submit their taxes without a social security number.

Abrazar has also processed a smaller amount of 1099-Misc. forms, which apply to unincorporated businesses and individuals who are not employees.

A 1099 applicant’s annual business expenses need to fall below $5,000 in order to qualify for volunteer tax assistance. That means that the people who come to Abrazar for help with these documents are typically contractors earning less than, approximately, $25,000, rather than small business owners, according to Ortega.

He adds that Many of the taxpayers who would seek help submitting either ITIN applications or 1099 forms from nonprofits like Abrazar are immigrants who may or may not have legal residency status in the United States.

“The [immigrant] community isn’t sure if they should be giving their information to the government right now,” says Ortega. “They’re afraid that information could somehow come back to where they’re living or working.”

Prior to this season, Ortega used to recommend that everyone file their taxes regardless of their income or status. However, today he is reluctant to give that same advice to potential taxpayers concerned about how U.S. immigration policy will develop in the political climate following the 2016 election.

However, while touring Abrazar’s facilities on Saturday, House Rep. Lou Correa (D-Calif.) encouraged people to stay resolute in the face of uncertainty.

“This new government policy is creating terror [but] this is when you dig down,” says Correa. “In 18 months we have to … show people through our vote what we think of those policies. This is our finest hour.”

LATEST
Audience for Emmy Awards show rises to 7.4 million
Gordon dares ‘bully’ Duterte: Do your worst, I’m not scared
Senators OK OVP’s budget at committee level, vow to increase it
Hitman 3 Review – Is It Worth The Hype?
7 infants among Tarlac’s 278 new COVID-19 cases