Film about undocumented Filipino immigrant to screen in Brooklyn 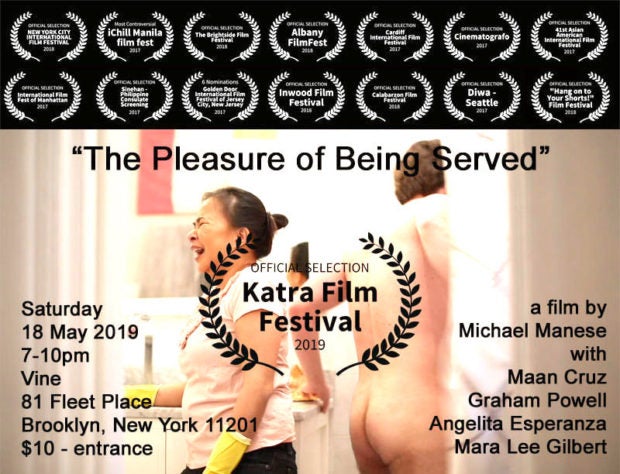 NEW YORK–Philippine born, NYC based filmmaker Michael Manese will screen his short film, “The Pleasure of Being Served,” on Saturday, May 18 at Vine in Brooklyn, New York.

The short film has a deceptively simple story filled with symbolism and archetypes. It touches upon topics such as sex, race, white privilege, misogyny, work ethic, morality, the immigrant experience, and friendship.

Rosa, an undocumented immigrant from the Philippines is a single mother trying to save enough money to bring her young son, Richard, to the U.S. She works as a domestic worker for Hudson, a rich, young American.

Part of her job is to juggle logistics between his two girlfriends Lynn, a fellow Filipina, and Jen, an American; they don’t know about each other and visit him on alternating weekends.

Having befriended the girls, Rosa becomes morally conflicted and must soon choose between enabling Hudson with his womanizing or accepting the generous pay he offers– money that she desperately needs.

“The Pleasure of Being Served” will be shown on Saturday, May 18 in honor of Asian Pacific Heritage Month, during a special presentation highlighting the works of talented Asian Americans and Pacific Islanders in front of and behind the camera.

Now in its second year, the Katra Sidebar Edition is a new section dedicated to showcasing works by underrepresented and marginalized communities while focusing on issues, topics and stories by filmmakers of color, African-American, Asian-American, Latinx, LGBTQIA and Female Filmmakers from all walks of life.

The Audience will vote for the best work of the evening and the winner takes home $1,500 of in-kind prizes courtesy of 3636 Studios and International Screenwriters’ Association.

“The Pleasure of Being Served”
(15 minutes, in English and Tagalog, profanity, PG nudity)