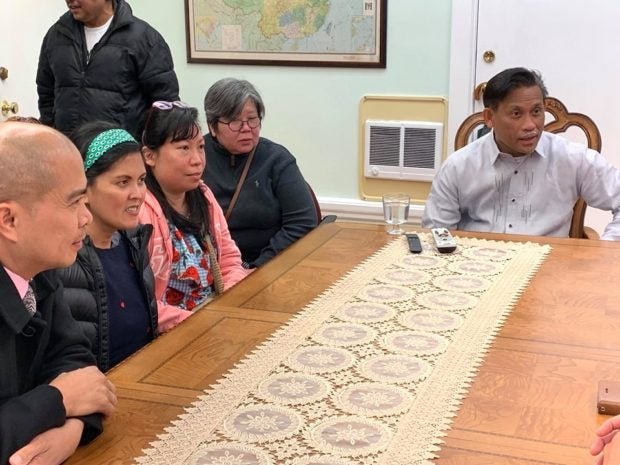 SAN FRANCISCO – An amicable meeting with the Philippines’ consul general in this city followed a brief rally for honest elections to protest any attempts to quell the voice of opposition to President Duterte among overseas Filipinos.

Members and supporters of the US Pinoys 4 Good Government (USP4GG) and the Filipino Americans Human Rights Alliance (FAHRA) on May 6 chanted “Ballots delayed, voters denied” and “Magnanakaw, huwag Iboto (Don’t vote for thieves),” and carried placards that read “Global Protest on Consulates #Whereareourballots?” and “Bring Back NAMFREL” as rally speakers Ago Pedalizo and Donny de Leon took turns lambasting Commission on Elections (COMELEC).

Protesters demanded the extension of the deadline to vote beyond May 13 to allow more overseas Filipino workers (OFWs) affected by the delay of mailed ballots and to bring back the National Movement for Free Elections (NAMFREL) as the poll body’s official citizen arm and give it the full access to COMELEC database and full power to audit, check and run a parallel counting.

Lawyer Rodel Rodis recounted how his group help pass into law dual citizenship for Filipino Americans and overseas voting. Rodis also wondered aloud why he still had not received the ballot he fought for.

After the rally, protesters met with Consul-General Henry Bensurto Jr. for two-hour “meeting among friends” to discuss their concerns.

Bensurto, accompanied by Consul Dominic Imperial, the overseas voting point person, and Consul for Cultural Community and Public Information Vanessa Bago-Llona, discussed the reported delays in the delivery of the ballots and the availability of money from the COMELEC for postal expenses, among other concerns.

Bensurto explained that he consulate started receiving the ballots in packets from COMELEC in Manila on March 18, mailed the first batch of packets on March 27 and have been mailing out an average of 2,500 ballots per day thereafter with the last batch of around 5,300 being sent out on April 30.

Protesters taped their mouths to dramatize the plight of voters if they are not allowed to let their voices be heard through the ballots. INQUIRER/Jun Nucum

“We still double check (the contents of) the more than 59,000 envelopes, check with the master list the names, precincts and ballot numbers assigned to the voter before putting it back into the packet and sealing it while making sure the address is correct before stamping the packet. An average of five to ten minutes is spent on this before the envelopes are sealed and stamped. The quota assigned is something like 2,500 per consulate personnel.” clarified Bensurto.

The United States Postal Service (USPS) informed the Consulate that it takes three to five days for the mailed packets to reach the intended receiver and takes the same number of days for it to reach the consulate to be counted. The consulate gets back an average of 150 accomplished ballots per day and the number is expected to increase as Election Day draws near.

At least 1,600 of the total 59,315 ballots sent did not reach their intended recipients for failure on the part of voters to update their current address and going back to the Consulate as a return-to sender mail. 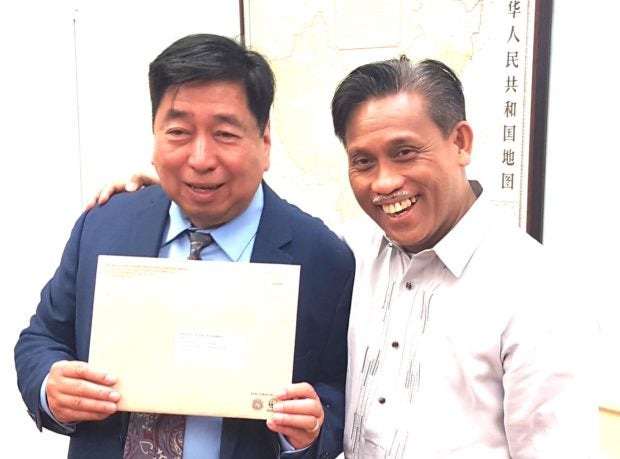 US Pinoy for Good Governance leader Atty. Rodel Rodis (left) looks relieved but surprised, when his ballot packet was turned over to him by ConGen Henry Bensurto Jr. (right). INQUIRER/Jun Nucum

“If you are a registered voter based on the official list of voters provided in our websites https://sparkconnectempower.com and www.philippinessanfrancisco.org, and have not received your ballot, we urge you to revisit the same websites to see if your name is included in the list of voters whose ballots were returned to sender.

“If your name is listed, give us a call at 415-2692090, available from Mondays to Fridays from 9 a.m. to 6 p.m. or leave a voice message to give your updated address. You can also send an email to [email protected] for the same purpose,” Bensurto appealed.

Bensurto also exhorted voters to fill out the ballots and send them back to the Consulate right away because the ballots should reach the Consulate either by mail or personally hand-in by May 13, 2019 Monday at 3:00 a.m. PST.

A separate list of registered voters also exists, including seafarers who indicated the Philippine Consulate in San Francisco as their address but were not aware or have totally forgotten about it. They also would not get their ballots in the mail unless they claim the same from the Consulate.

Bensurto also urged voters from either list who happen to be nearby to proceed to the consulate to personally get, fill and cast their ballots on the same day.

One such voter who was able to personally get and cast his ballot while the dialogue was going on was Rodis, who was surprised to learn that the Consulage’s ballot record listedthe Philippine Consulate as his address. Rodis asserted that in the past elections he had been receiving his ballot at his home of 30 years.

“Apparently, someone had changed my address to the Consulate’s address. I was handed my official ballot, which i filled and handed my ballot over to the consul. Mission accomplished!” a relieved Rodis said.

As for the availability of money for stamps and other expenses, Bensurto admitted that the actual money for stamping was not there at the start and he had to make a call to proceed with stamping the packets using the consulate’s own resources.

“On April 12, we received a COMELEC confirmation notice that we will be reimbursed,” imparted Bensurto. “At the moment, some $78,000 was spent by the San Francisco Consulate for election-related expenses.”

At the conclusion of the dialogue, Pedalizo handed Bensurto a formal letter wtih their demands for extension of deadline of receiving ballots and accreditation of NAMFREL as citizen arm both of which they hope would be eventually acted upon by COMELEC.

Bensurto committed to relaying the letter to COMELEC, and the protesters promised to help in the dissemination of important appeal for fast action of voters to have their ballots received, filled out and sent back to the Consulate.

“Every time we have a constructive dialogue with the community, we find it positive and something where we could learn from each other. Any dialogue that clarifies the issues promotes understanding,” Bensurto noted.

Pedalizo of FAHRA said the conversation as open, honest and collaborative: “We were able to raise our concerns on the delay of the sending the ballots because we are concerned that at a minimum we have 30,000 voters who may not be able make it to May 13. We asked the COMELEC through the Consulate to extend the deadline for voting.”

The result of election for San Francisco, based on the final tally of figures reflected from the fed ballots in the month-long gathering of ballots, will be electronically transmitted and the official or hard copy of the same will be brought personally by Bensurto to the embassy in Washington, D.C.

The consulate will also be closed for regular consular services on May 13 and 14 to concentrate on the conduct of the electoral process.