Why Filipino nurses are a huge presence in U.S. health care

Why Filipino nurses are a huge presence in U.S. health care 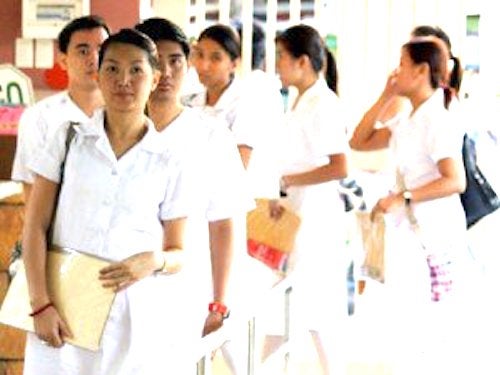 A vast majority of Filipinos are seen to dominate the field of nursing in the United States, with registered nurses (RNs) making up the largest segment of the country’s health care workforce.

Many often attribute such numbers to the common notion that those who hail from the Philippines are hospitable and accommodating. However, beyond that reputation lies a clearer explanation of how the Pearl of the Orient Seas seemingly exported care to the hands of Uncle Sam.

In the Philippines, an average RN commonly earns only around five percent of the salary that the U.S. can offer, with an average of P170,960 ($3,301) per year, PayScale reported. From 2012 to 2017, 92,277 nurses left the Philippines in search of opportunities abroad, according to the Philippine Overseas Employment Agency.

The employment of Filipino nurses in the United States was made more convenient due to the colonial relationship shared by the two countries from 1899 until 1942 during the Japanese occupation but it wasn’t until 1946 when the Philippines was granted independence by the U.S. During the American occupation, several programs ultimately led to the surge of Filipino nurses in the U.S.

A sudden need for local health care professionals led the U.S. Army to recruit Filipinos to work as Volunteer Auxiliary and Contract Nurses. Filipinos were sent to the United States as government-funded scholars otherwise known as pensionados.

They included those pursuing a nursing degree in the said recruitment. Some of those who stayed for employment as nurses in the U.S. established the Philippine Nurses Association of New York in 1928.

As pensionado nurses returned to the Philippines, they helped set up and manage the 17 nursing schools that were established in the country from 1903 until 1940. Due to this, most of those who finished their nursing education were inspired to fly to the United States since they can do so with little restrictions. Filipino nurses were considered “U.S. nationals” and even traveled with U.S. passports.

As the U.S. State Department set up an Exchange Visitor Program to “combat Soviet propaganda,” more nurses from the Philippines availed of the opportunity. The Philippines and the United States settled on an agreement that highlighted the importance of financing educational and cultural exchanges. A large percentage of the exchange visitors came from the Philippines, and many of them were nurses or nursing students.

1965 amendments in the U.S. immigration laws

Immigration laws were liberalized to allow Filipino nurses and other professionals to immigrate to the U.S. The said amendments permitted Filipino nurses to come to the U.S. on tourist visas without pre-arranged employment, allowing them to adjust their status once they set foot in the U.S. During this period, the number of nursing schools in the Philippines soared from 17 in 1940 to 170 in 1990 to more than 429 at the present time. Many of these nursing schools were diploma mills exploiting the desire of many Filipinos to enter the nursing profession.

However, the lax regulation resulted in a problem since only 15-20 percent of the Filipino nurses who immigrated to the U.S. after 1965 could pass the state nursing board exams. As a resolution, the Commission on Graduates of Foreign Nursing Schools (CGFNS) was established in 1977 to prevent the exploitation of graduates of foreign nursing schools who come to the United States to work as nurses but who couldn’t pass the nursing board exams in the U.S.

Today, there are many steps one must pass through in order to become a licensed nurse in the United States, even if they are licensed back in the Philippines.

The process includes: meeting educational requirements, such as graduating from an accredited RN program abroad and showing at least two years of work experience in your home country; and then applying to a state’s Board of Nursing and taking the National Council Licensing Examination-Registered Nurse (NCLEX-RN), which may include an English language proficiency test. Once licensed, the job search begins through a nursing recruitment agency or U.S. employer. Nurses can then apply for a U.S. visa after receiving a job offer.

From January to March of this year, 2,890 Philippine-educated nurses have taken the NCLEX in the U.S. Last year, a total of 10,302 Filipino nurses took the test, according to the National Council of State Boards of Nursing (NCSBN).

History suggests that the Philippines and the U.S. are linked beyond the nurses that step in to fill the latter country’s demand for that special health care. The connection between the two countries continues to show itself in the present day.