Trump to crack down on visa overstays, mostly by Africans and Asians 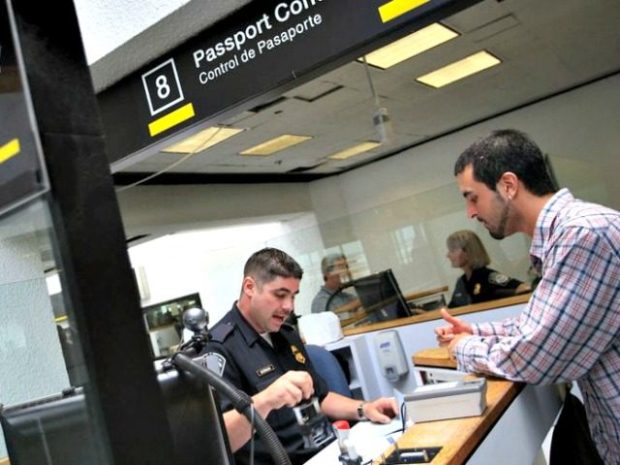 Scene at a U.S. passport control. The Trump White House has ordered a crack down on visa overstays. AP FILE PHOTO

President Donald Trump’s crackdown on visa overstays will target about 12% of foreigners who legally enter the U.S. on short-term visas but remain after visa expiration and are mostly from African and Asian nations.

Trump ordered the secretaries of State and Homeland Security to crack down on countries whose citizens are most likely to overstay their visas, a long-term problem that is now the biggest source of illegal immigration into the U.S., according to USA Today and Associated Press reports.

More than 569,000 foreigners overstayed their visas last year, according to Homeland Security data.

Trump ordered penalties for countries whose citizens overstay their tourist and business visas more than 10% of the time, such as limiting the number of travelers to the U.S. from any one country, requiring foreign travelers to post “admission bonds” that would be repaid once they leave the U.S. and requesting more documents from foreigners seeking visas.

Under Trump’s guidelines, 21 countries could face sanctions because 35,442 of their citizens overstayed their U.S. visas in 2018, according to Homeland Security data.

Trump could have opted to punish countries that are the sources of the largest numbers of total visa overstays. For example, more than 34,000 Brazilians, 15,000 Chinese, 10,000 Indians and 10,000 French overstayed their visas in 2018, reports USA Today.

But Trump chose to target countries with high overstay rates, not the total number of overstayers. That means Brazil, China, India and France will not be affected by Trump’s order since their citizens’ combined overstay rate was 0.9%.

But smaller countries like Bhutan could face sanctions since 46 of 398 of its people who traveled to the U.S. in 2018 overstayed their visas, a rate of 13.1%.

Africa, with 13 countries on the list ranging from Angola to Chad to Sudan, will be most affected by the crackdown. The biggest target by far is Nigeria, which saw 29,004 overstays in 2018.

Another six countries on the list are located in Asia, and several have been embroiled in bloody armed conflicts, such as Afghanistan, Syria and Yemen. Rounding out the list are the island nations of Palau and the Federated States of Micronesia, who combined for 13 total visa overstays in 2018.

Critics say it’s no coincidence that the Trump administration chose a method that punishes mostly African and Asian countries and spares European countries and other U.S. allies.

“This is Stephen Miller’s way of operationalizing his immigration strategy to ‘make America White again’ by covering his tracks with data to disguise the underlying White nationalist objectives of the policy,” USA Today quoted Douglas Rivlin, director of communications for America’s Voice, an immigration advocacy group, said of the president’s immigration adviser.

View comments
TAGS: B1 and B2 US visas, entry into US, immigration US, travel to US, Trump immigration crackdown, US visa overstays