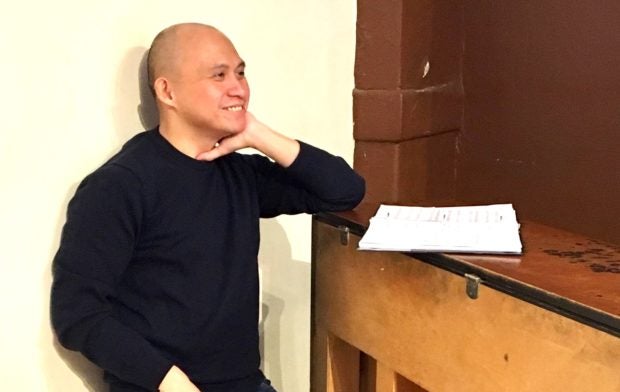 Paulo Tirol is the composer and lyricist of “On This Side of the World.” CONTRIBUTED

NEW YORK — Composer and lyricist Paulo Tirol’s musical “On This Side of the World” has characters that are selfless workers, young lovers, gossipy church ladies, aspiring actors and carefree millennials—all of whom are Filipino immigrants in the US.

Without connecting dialogue between songs, each song is a self-contained vignette. The anthology is described as a “a mosaic of love and loss, humor and heartache, yearning and faith.”

Tirol knows of where he creates. He himself moved from the Philippines to Boston in 2012 to study at Berklee College of Music. He then moved to New York to take up a master’s in Musical Theatre Writing at New York University’s (NYU) Tisch School of the Arts on a full tuition scholarship. 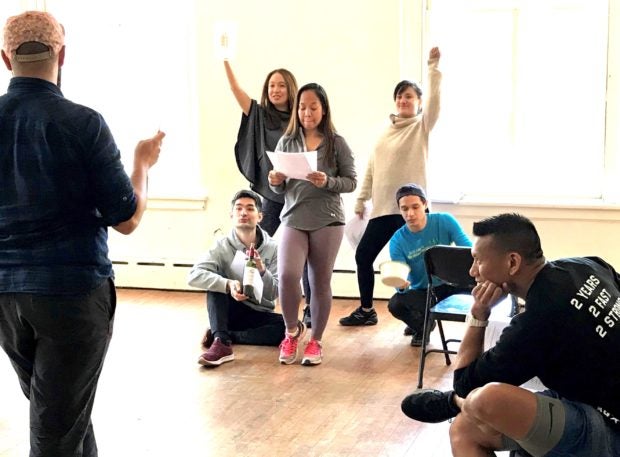 Cast of “On This Side of the World” rehearsing choreography. CONTRIBUTED

As a musical director, his credits include “Reefer Madness,” “Drowsy Chaperone” and “The Wedding Singer.”

Tirol grew up listening to “my dad playing LPs and cassettes of Ella and Louis singing the songs of George and Ira Gershwin, ‘West Side Story,’ ‘My Fair Lady,’ ‘Camelot’ and pretty much everything by Rodgers and Hammerstein. I would also ask my parents to rent ‘Annie,’ ‘The Sound of Music’ and Disney movies—on Betamax!—over and over again.”

“But it wasn’t until the late ‘80s that I actually learned what a ‘musical’ is. I got the double-cassette of the cast recording of ‘Miss Saigon.’ It was huge in the Philippines because of the many Filipinos in the cast and it was many Filipinos’ entry point to musical theater.

“I was obsessed with how the music, with all its lushness and expressiveness, was in the service of character, moment, and storytelling.”

He eventually wrote, composed and arranged music for groups and clients as well as scored films.

“On This Side of the World” began as a project for his school work at NYU. Tasked to choose a community to create a song cycle on, Tirol chose Filipino immigrants.

“It’s a community I’m part of and familiar with … also it was something unique to me, something only I could write,” he says.

The community grew along the way. “When I started, the Filipino immigrant community I was a part of was comprised of grad students, medical professionals and artists.

“Over the years, my community has expanded dramatically. I lead music every Sunday for a predominantly Filipino parish in Jersey City, which includes Filipinos of all backgrounds, professions, ages, who speak different Filipino languages and come from all parts of the Philippines. Cast rehearsing songs from “On This Side of the World,” which are about Filipino American stories. CONTRIBUTED

“As my community of Filipino immigrants has expanded, so has the array of stories and characters that have gripped, intrigued and inspired me,” says Tirol.

“The Filipino immigrant story is one of courage, sacrifice, searching for identity, struggling to belong, and ultimately, redefining home.”

For a long time, Tirol was reluctant to have his songs performed, assuming that “these were stories no one was really interested in hearing.”

“But my collaborator, director Noam Shapiro, who is not Filipino, believes in it so much and has pushed me to finish it and helped me present it.”

A staged reading was held earlier this year to test the material’s developments. “People’s responses to it—Filipinos, Asians, non-Asians, immigrants, children of immigrants and people whose families have been here for generations, artists and non-artists alike—have convinced me that this is a piece worth sharing,” says Tirol.

In addition, “the theater community has welcomed this piece with an excitement that I honestly didn’t expect. Fil-Am actors are excited to share their own culture and heritage, to tell their communities’ own stories, to play characters from their own lives.”

“For the Filipino American community at large, my mission is to share the community’s stories with pride, honesty and love. I’m happy to be telling it.”

“On This Side of the World” runs May 2-12 at Access Theater, 380 Broadway, New York. Visit Onthissideoftheworld.com.