The extraordinary immigrant tale of Reagan John Rada, gem designer to the stars 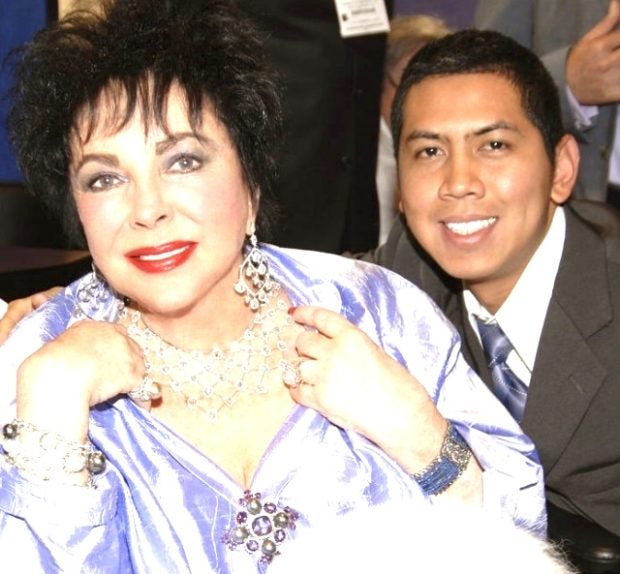 An undocumented immigrant since 2000, Rada came to be an employee of the House of Taylor Jewelry (HOTJ), where he worked closely with the late actress in carrying out jewelry designs.

It was in 2006 when he learned that the late actress was an immigrant herself, after she discovered his illegal immigration status. Her immediate reaction: “We’ve got to get him papers!”

Taylor signed his green card application under the visa for extraordinary people program (EB-1 visa) and got a former American ambassador to lobby for his legalization with the Office of Senator Barbara Boxer because, in Taylor’s own words, “We have something in common,” Rada recalls. A British citizen who knew first-hand the difficulties of immigration paperwork, Taylor had to renew her green card every 10 years and was up for another renewal in 2006 when she signed his EB-1 visa application as the owner of HOTJ.

“At 27, I was promoted to vice-president for asset management and design,” Rada told INQUIRER.net. The accidental jewelry designer from Bicol commemorates this stroke of luck through the name of the company he founded years later—Serendipity Gem, which debuted last year at the New York Fashion Week and did a follow-up in February.

His path to success was like a roller coaster.

Like many undocumented Filipinos in Los Angeles, Rada worked part-time as a caregiver after falling out of status. He entered the United States as a 19-year-old with just $684 in his pocket. He had traveled with his mother on a tourist visa and was given just two months to stay in the U.S.

“Those were challenging years because my first employer was a very mean couple. I slept on the floor. I had to eat at the kitchen sink because they wouldn’t let me eat at the dining table. Then I had to change the diaper for the old person five times a day. They paid me $150 a week,” Rada says.

As somewhat of a relief, he did not have to change adult diapers every day. But on the days he wasn’t care-giving, he would constantly ask around for a job, at times landing dishwashing jobs or “whatever was available.” Until he found his luck in the jewelry business in December 2000.

Starting out as an errand boy at JRM Jewelry in downtown Los Angeles, Rada worked through housekeeping and filing for about three months before being entrusted with delivering diamonds and gemstones on foot around the Jewelry District. Every time he was at the shop, he’d learn parts of the craft—from polishing, pulling wires and setting stones to sizing rings. After about a year, he finally got promoted.

“They switched me to inventory and design. And in 2004, I became a leader of a team ‘cause the company just expanded to something that they never expected,” Rada says.

Owned by Jack Abramov, RJM Jewelry was beginning to get noticed. It started receiving custom jewelry orders from the likes of Mirabelle 18k, Elton John Jewelry and Celine Dion Jewelry.

“Celine Dion contracted our company to do the jewelry to be sold in Las Vegas at the Caesars Colosseum. This is like souvenir jewelry for the show. And when she is resting, Elton John plays the Red Piano Concert. So there were two contracts that we got, and I suggested a lot of design ideas. My boss was like, ‘You’re so good at decorating lines and design.’ So the jewelry from Celine Dion’s concert from 2002 to 2004 and Elton John’s concert, I co-designed all of them using the company’s name,” Rada says.

RJM Jewelry hit the proverbial jackpot in 2004. “My boss told me I was their lucky charm so they treated me as their family. And then in 2004, Elizabeth Taylor’s team was looking for a jewelry company to partner [with] to create her own line with Kathy Ireland. So, that’s how the House of Taylor was born,” Rada says.

His boss, Abramov, eventually became the CEO of HOTJ. And it was the company’s listing at the Nasdaq that led to Rada’s good fortune.

When Taylor bought RJM Jewelry in 2004, she did not know about Rada’s immigration status. “And I didn’t plan on coming out anytime either. It was difficult, I was in hiding for many years. I could not tell a soul for fear of deportation. I didn’t want to be caught jaywalking, I didn’t want to go to San Diego. I was so cautious, because once they arrest you for a little ticket and find out you don’t have an ID, end of story. Especially after 9/11 in 2001— that’s it, they could take you away. So I always obeyed the rules, even in the simple things,” Rada says.

With HOTJ booming the next four years, Rada was at the peak of his career until 2008, when the U.S. experienced its worst financial crisis.

“The company [HOTJ] closed ‘cause we were trading in Nasdaq and at that time the markets were crashing down. We were a casualty of the financial crisis,” he says.

“I was part of that company from the inception. I was the key person of that company from the very beginning. So, it destroys my entire ego. They gave me $25,000 plus their shares that I thought I could retire on. And it went to zero. The $25,000 plus ten dollars a share is $250,000. That’s a lot of money for me at that time. I was 27 years old. I burned the stock certificates ‘cause it had no value. You cannot cash it. It’s all gone, it’s all gone.”

Shocked and devastated, Rada returned to the Philippines for the first time in 2008. 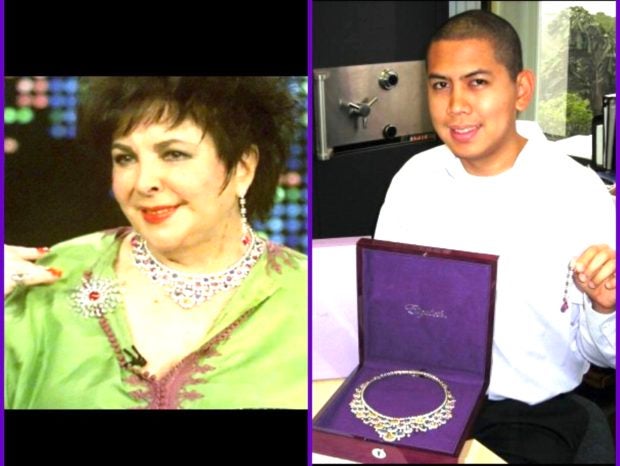 Photo shows the multi-sapphire necklace that Rada helped design for House of Taylor Jewelry. The late actress wore the necklace when she came on Larry King Live in 2012, her first public interview in three years. CONTRIBUTED

“From nothing, I became like this going high, and then went down to rock bottom twice. So I left the country. I was so devastated. I was crying on the plane and was crying every day because all of this was gone. Can you imagine? You were part of this beautiful company from the very beginning and then it got wiped out,” he recalls.

After visiting his hometown in Bicol, he went through a depression and continued traveling around Asia “to find himself.”

While in Chanthaburi, Thailand, he got the email that would turn his life around. It was a message from Piranesi, saying “We have a job offer for you in New York.”

A brand partner of HOTJ, Piranesi was familiar with Rada’s exceptional talent.

“Bringing an idea to life is one of the hardest things to make in jewelry, especially earrings with the weight and everything. And I have that talent. I visualize it,” he adds.

Piranesi wanted to hire Rada as its lead designer, and in the fog of his depression, the accidental jewelry designer tossed a coin to seal his fate. His fortune has lasted for about 11 years now as a foremost designer of fine and fashion jewelry, real estate investor, business enthusiast and philanthropist. He lives in New York with Teddy Montee, the love of his life whom he met in 2011 on a side trip to Mexico from Aspen while training for a new sales role at Piranesi.

“I think my biggest characteristic is I’m like a chameleon. I blend in, I adapt. My adaptability is so good. When I was dirt poor, living in a hallway for six months, I adapted to it… Fate twisted my direction. I moved here, and I liked it. I moved here with a mission, and that is to be better. I don’t want to be poor anymore because seriously, it’s exhausting. When you sleep in the hallway of an apartment and you have to knock the door to use their bathroom for six months, being tossed around by your employer calling you ‘dog,’ sleeping on the floor, eating at the sink, scrubbing the floors—there comes a point, you just say, ‘you know what, I want to be better,” Rada says.