Jesus’ Tomb – And the World is Still Awed! 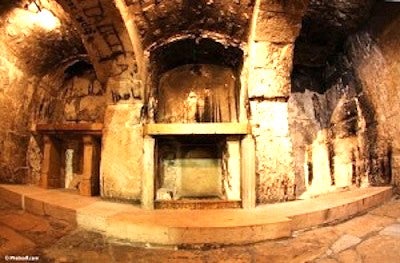 Inside the Church of the Holy Sepulchre

Come and see the “burial bed” that Mark (earliest of the four Gospels) narrated as the exact place where the Body of Jesus Christ was laid down following His shameful death on the Cross (Good Friday) on a hill (Golgotha) just outside the Damascus Gate.

The fascinating history of the Jesus’ “burial bed” inside the Holy Aedicule (Latin aedes meaning “small house”) inside the Basilica of the Holy Sepulchre is alive. Splendid!

First, we have read the awe-inspiring 2017 headline news from CNN: “Site of Jesus’ tomb re-opens… It’s one of Christianity’s holiest sites.”

Then came 2018, when the National Geographic Museum in Washington D.C. invited the world to see in 3D the “Tomb of Christ: The Church of the Holy Sepulchre Experience.” And what an experience going back to Jerusalem on virtual reality!

Constructed by Emperor Constantine in the 4th century, the Sacred Tomb of Jesus, or the Holy Aedicule, underwent a historic restoration — a massive-expensive project that used state-of-the-art technologies, now capturing global interfaith attention.

“Such shelves and niches, hewn from limestone caves,” scientists confirmed, “are a common feature in tombs of wealthy 1st-century Jerusalem Jews.”

The burial place is a tomb carved into the rock, hence a cave. The National Geographic now published an archeological documentary on how Jesus’ burial site “evolved from cave to Church in 2,000 years.”

Jesus the Poor was buried in a borrowed tomb

The tomb’s owner was Joseph of Arimathea the Rich, a member of the Jewish Council (Sanhedrin) that had condemned Jesus.

On the evening of the Crucifixion, Joseph of Arimathea asked Pilate for the body, and, after Pilate granted his request, he wrapped it in a linen cloth and laid it in a tomb (Mark 15:43).

Reckon how Jesus was given an honorable burial and how Joseph wrapped the body in a clean shroud (now the Holy Shroud-of-Turin). Matthew’s Gospel used the Greek word soma (body) rather than ptoma (corpse). Why?

The Roman authorities made the tomb secure by putting a seal on the stone and posting the guard, an added detail to answer claims by contemporary opponents that the followers of Jesus had stolen his body (Matthew 27:61-66)

Consider how reverent was their treatment of the historic project: “We consolidated the holy rock. We opened the tomb of Christ in order to protect it from the infection of grout. Then we reinstalled the stone slabs after inserting joints of titanium,” Moroloulou said.

Dr. Antonia Moropoulou, a Chemical Engineer, of the National Technical University of Athens led an interdisciplinary team of specialists and masons who carried out the special project of Jesus’ tomb restoration in 2017.