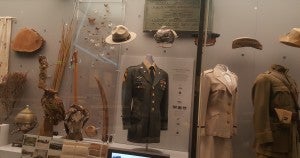 Uniforms and other paraphernalia used during World War II serve as constant reminders of the horrors of wars past. INQUIRER/Jun Nucum

SAN FRANCISCO — A special exhibition recently opened to the public to recall the time when Japanese Americans were forced from their homes and detained in concentrations camps for the duration of World War II. The exhibit serves as a cautionary tale on the dangers that lurk in these times of rising xenophobia in America.

Entitled Exclusion: The Presidio’s Role in World War II Japanese American Incarceration, the exhibit expounds on the role the Presidio played as headquarters of the then Western Defense Command.

The command issued some 108 civilian exclusion orders and other military directives to implement President Franklin D. Roosevelt’s Executive Order 9066 authorizing the removal of any or all people from military areas “as deemed necessary or desirable.”

That order resulted in the forced relocation of some 120,000 Japanese Americans to camps scattered around the country during the war, under harsh and difficult living conditions.

Presidio Trust Curator Liz Melicker pointed out that the exhibition encourages reflection and invites visitors to investigate the issues and decisions that led to this dark chapter in American history.

The exhibit opened on the day that Civilian Exclusion Order No.5 was posted throughout downtown San Francisco with the infamous “Instructions to All Persons of Japanese Ancestry,” ordering the forced removal of all Japanese Americans in 1942. 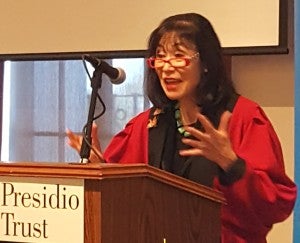 Karen Korematsu, founder and executive director of the Fred T. Korematsu Institute underscores the need for children to be taught civil rights lessons at a young age to avoid a repetition of the terrible mistakes of the past. INQUIRER/Jun Nucum

“Special exhibitions seek to inspire civic engagements by exploring how and why the past matters and how it remains relevant today. Themes explored in the Exclusion exhibition include political decision-making, mass incarceration, immigration reforms and racial profiling,” Melicker explained.

”Visitors to the exhibition are reminded of the power of their individual voices in the democracy that is the United States. They are encouraged to engage in dialogue about parallel contemporary social issues where their voices will form part of their exhibition.”

Karen Korematsu, founder and executive director of the Fred T. Korematsu Institute describes the exhibit as an invitation to visitors to contemplate what can be learned from this shocking time in U.S. history, “to help us contend with present-day issues”—namely racial profiling, anti-immigrant sentiment, mass incarceration and discrimination. 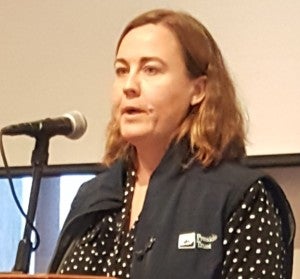 Presidio Trust Curator Liz Melicker says special exhibitions like the “Exclusion” seek to inspire civic engagements by exploring how and why the past matters and remains relevant today. INQUIRER/Jun Nucum

“Two-thirds of those imprisoned were American citizens by birth; the others were non-citizens unable to obtain naturalized citizenship by federal law. After the bombing of Pearl Harbor and under the pretext of ‘military necessity,’ these civilians were removed from their homes and detained without due process,” Korematsu  recounted.

In an interview, Korematsu stated, “We want people to think what executive orders mean, who holds the power and what are the bases for them.”

“I think that is the relevance of Executive Order 9066. Back in 1942, it was clearly about racial profiling, and here it is. All of us who are civil rights advocates think that it is wrong that people are targeted for their race, religion, or ethnicity,” Korematsu said.

“The point is that collectively now, we have the power to fight against these injustices and that we need together uphold our civil rights. Back in 1942, the different organizations that really had the big voice did not really stand up against the government. But now we do and we are seeing that demonstrated. It is something we need to be a part of and support.” National Japanese American Historical Society Executive Director Rosalyn Tonai thinks that America is suffering from historical amnesia and that exhibits like ‘Exclusion” can trigger reflections of the past again to be reminded of its lessons. INQUIRER/Jun Nucum

National Japanese American Historical Society Executive Director Ro selyn Tonai added that now more than ever, the lessons to be learned from the injustices of Executive Order 9066 must be taught.

“I think that America is suffering from historical amnesia that is why this current exhibit is so relevant. We have to trigger our past again and we have to understand how things formed. This is all about global understanding and about conflict too. So again, we have to learn from this exhibit and say wait a minute this is not going to happen again,” Tonai declared.

Korematsu noted the importance of K-12 education because children need to be taught these lessons on their constitutional rights at a young age.

“We all collectively need to share these stories to fight against injustices and to support our schools because that is where we are going to make a difference, because if this generation and the future generations don’t learn these lessons, they are going to still make the same mistakes,” stressed Korematsu.

“We to teach people respect and to appreciate our differences. We should celebrate our different cultures because at the end of the day that is what makes America. The majority of the people are immigrants,” she added.

“We need to better understand each other on the very elemental level. I think that is going to combat a lot of the racism and profiling of innocent immigrants in marginalized communities,” Tonai underscored.

The Exclusion exhibit is open until March 2018, Tuesdays to Sundays from 10 a.m. – 6 p.m. at the Presidio Officers Club Heritage Gallery on 50 Moraga Avenue at the Presidio Main Post. Admission is free.