The Agony in the Garden of Gethsemane 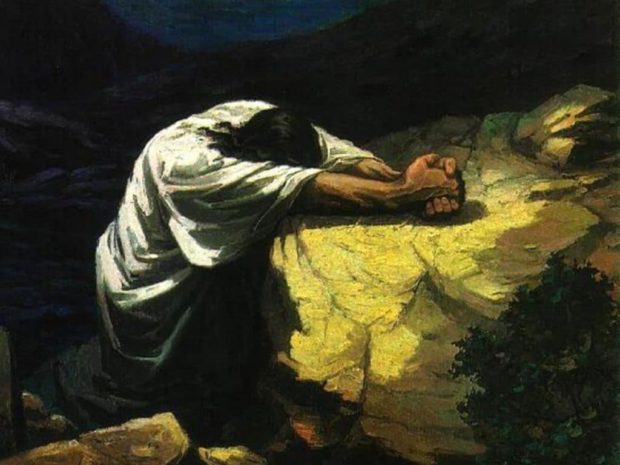 Personal sins (denied by many), massive poverty caused by greed and corruption, so much hatred, flowing rivers of blood, vast oceans of tears in our supposedly civilized society – and a crucified Savior.

In Gethsemane, you find our Blessed Lord kneeling down, struggling, tormented by the menace and the moral consequences of sins. Sins offend God and make your guardian angel weep in utter sadness. Adultery is sin, just as your failure to go to Mass on Sundays. Your false accusations against an innocent person is also an offense against God.

In Gethsemane, Jesus contemplated the dear price of the sins of the Old Testament. The earliest murder case was fratricide, when Cain brutally killed his own brother, Abel. There was an inclination to evil in Cain’s soul due to Original Sin, a truth of faith that the current Philippine President has denied and scoffed at.

In Gethsemane, Jesus remembered the sins during Noah’s time, the exaggerated complacency and pride of those who built the tower of Babel, the sexual pollution of Sodom and Gomorrah, the unruly and ungrateful attitude of God’s people during Moses’ time, the sins of those who killed the prophets, and other transgressions too shameful to mention.

The dear price of the sins of the New Testament Jesus shouldered as well — the hypocrisy of the Pharisees and Sadducees, the threefold denial of Peter the first Pope, sins of those who shouted “crucify Him!” the cowardly betrayal by Judas, the doubt of Thomas, the apostasy of the early Christians, etcetera.

In Gethsemane, Jesus contemplated the sins of today and tomorrow. The intentional poisoning of society by fake news and gossiping that destroy people’s lives and break people’s hearts, curses directed at God, premarital and extramarital sex, pride and envy, human slavery, dishonor of parents, clerical sex abuse and EJKs.

Jesus assumed the dear price of the sins of women, sins of men, terrorism and the murder of children, vengeance in human hearts, the worship of money and cybersex in smartphones; sins committed in high places, sins done in the dark alleys, wicked designs, yetzer, and more sins – all factual dark realities symptomatic of a spiritual menace we call SIN.

Because of the frail humanity that He assumed, Jesus felt the anguish and, in that Garden, He begged the Father to take the cup of suffering away. He knew that to drink its wine is to drink the poison of death.

The tiny blood vessels and veins of our dear Lord, while contemplating the sins of the world, ruptured under intense stress (physical, psychological, or both) that caused bloody sweat. Medical science calls it hematidrosis.

Our Lord’s Sacred Humanity was bargaining the price of redemption, yet, at the end of His agony, as blood began to drop like the first beads in the Rosary of our salvation, Jesus sighed, wept, and surrendered, and conformed His will with the Father’s will: “Not mine but Thy Will be done.” (Luke 22:44).

The skeptics and cynics said in protest: Isn’t it inappropriate, insane, or even scandalizing that SIN, which God so abhors, should be the occasion for God to assume a human nature? Because sin (evil) is the polar opposite of the Good!

Oh, Divine Madness, oh, Divine Goodness and, paraphrasing William Shakespeare, “God’s only love sprung from His only hate” and God did what was insane!

Every single year, during the Easter Vigil, the whole Christendom intones the song of a wonderful paradox: “O happy fault, which gained for us so great a Redeemer!” (cf. Exultet in the Catechism of the Catholic Church, 412).

Jose Mario Bautista Maximiano ([email protected]) is the author of The Beginning and the End: A Theology of the Human Person (Claretian, 2016), a textbook in Catholic colleges.

MORE STORIES
Tips to protect kids during a Covid -19 outbreak
First-ever papal visit to PH – a saintly heart for the poor
What Filipinos can learn from Confederate statues’ removal
Don't miss out on the latest news and information.

LATEST
Metro Manila stays under GCQ until July 31
Bayan repeats call for Duque’s resignation: Why is Duterte keeping him?
After talking tough vs China, US conducts freedom of navigation operation in Spratlys
3 added to Davao Region COVID-19 death toll as 25 new cases listed
Woman’s search for herbs turns scary after snake bites her
MOST READ
usa Kellyanne’s part-Filipina daughter, 15, scorches Trump
usa Filipino bus rider in Vancouver told to ‘speak English here’
usa Filipino in NY kills own mother, a Covid survivor
usa Why leaders who terrorize people need ‘anti-terrorism’ laws
usa Police in So. California arrest woman who harassed Asians
usa Hundreds of Filipinos at risk in California have yet to be tested – survey
usa Anti-Terror Act is itself an act of terror