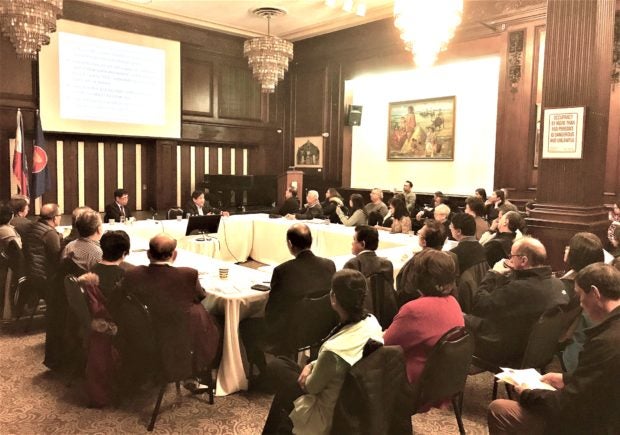 NEW YORK — Many questions are frequently asked about land titling, inheritance, partition and, most importantly, how to avoid scams in land registration in the Philippines. For those who immigrated, or who are working abroad, the issue becomes more relevant because investing in properties back home is one of their priorities.

The World Bank recently held an international conference in Washington DC on land governance and poverty alleviation, attended by representatives of various countries to discuss the state of poverty of nations. The Philippines was represented by the Deputy Administrator of Land Registration Authority (LRA), lawyer Robert Nomar Leyretana, a career official in the government agency handling land registration matters for the past 15 years.

After the World Bank conference, the Philippine Consulate General of New York held a focus group discussion on foreign ownership and partition issues, attended  by 60 Filipino American attorneys and landowners from the tri-state region, with a crash course conducted by Atty. Leyretana in a similar MCLE-style (continuing education for lawyers) training that he does in the Philippines.

Consul General Claro Cristobal moderated the session on Facebook live, where viewers from all over North America were able to participate and ask questions online. After three hours of a lively presentation and audience participation, several salient highlights of the talk are condensed below. A replay is available at Facebook @PHLinNY 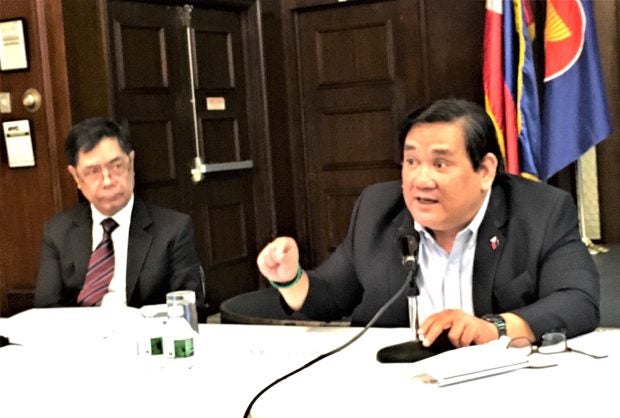 As a general rule, a foreigner is prohibited from being a transferee of a real property in the Philippines, subject to some exceptions:

Lawyers and landowners both raise the challenge of preventing unscrupulous persons from pulling a scam. It appears that this issue was laid out by no less than the Philippine Supreme Court in a leading case that establishes guidelines on how to conduct proper due diligence when buying properties.

As a result of the landmark case of Domingo Realty, Inc. vs. Court of Appeals, under G.R. No, 126236, promulgated on January 26, 2007, the following practices are to be observed:

(a) verify the origin, history, authenticity, and validity of the title with the Office of the Register of Deeds and the Land Registration Authority;

(b) engage the services of a competent and reliable geodetic engineer to verify the boundary, metes, and bounds of the lot subject of said title based on the technical description in the said title and the approved survey plan in the Land Management Bureau;

(c) conduct an actual ocular inspection of the lot;

(d) inquire from the owners and possessors of adjoining lots with respect to the true and legal ownership of the lot in question;

(e) put up signs that said lot is being purchased, leased, or encumbered; and

(f) undertake such other measures to make the general public aware that said lot will be subject to alienation, lease, or encumbrance by the parties.

In Registering a Deed of Sale or any voluntary instrument, it is important that seller must be able to present the owner’s duplicate copy of the title. The law, Section 53 of PD 1529 states that the production of the owner’s duplicate certificate, whenever any voluntary instrument is presented for registration, shall be conclusive authority from the registered owner to the Register of Deeds to enter a new certificate or to make a memorandum of registration in accordance with such instrument, and the new certificate or memorandum shall be binding upon the registered owner and upon all persons claiming under him, in favor of every purchaser for value and in good faith.

An interesting case decided by the Supreme Court was that of Spouses Chua vs. Soriano, GR 150066 promulgated on April 13, 2007, about the use of falsified Special Power of Attorney (SPA), how it affects an innocent buyer, in good faith and for value.

In that case, the registered owner of a titled property entrusted another person for safe-keeping of the title. The trusted person executed a Special Power of Attorney and forged the signature of the owner, making it appear that he was authorized to sell the property. A third person then purchased the property.

The Supreme Court ruled that the buyer was in good faith. Although the signature in the SPA was subsequently declared by the trial court to have been falsified, it would not revoke the title subsequently issued in favor of the third-party buyer. The reliance by the buyer on the duly notarized SPA presented is sufficient evidence of good faith. Buyer need not prove anything more for it is already the function of the notarial acknowledgment to establish the appearance of the parties to the document, its due execution and authenticity.

This case was a shock to many foreign-based landowners, a reality check on whether they should leave the original owner’s copy to someone, or to think about issuing power of attorney to anyone. Also, a frequent problem is the issue of selling a property in installment, where the buyer who does not pay in full and obtains an SPA creates a problem on the title of the owner.

Partition of estate of deceased person

Another dilemma for those residing abroad is when a parent or relative dies in the Philippines, leaving behind a sizable estate for inheritance among several heirs. This usually causes family schisms —  when there is no will, and the heirs are left to fight for what they claim to be theirs.

The LRA recommends the following procedure for partition:

Heirs based in a foreign country may execute the extra-judicial settlement in the foreign country, or in the Philippines. The foreign Consulate will issue guidance on how to obtain Certificate of Authenticity, in lieu of notarial acknowledgment. Consul General Cristobal announced that the Apostille Convention related to consular notarization will provide new guidance effective May 15, 2019.

The Extra-Judicial Settlement of Estate or the Affidavit of Self-Adjudication requires publication in a newspaper of general circulation for three consecutive weeks. Once title is issued pursuant to a settlement among heirs, it will contain an annotation of two-years contestability. After two years, a request to remove the annotation can be requested from the Register of Deeds.

Finally, a proposed sale to a third party can be executed with the same instrument. A simultaneous sale or waiver of by an heir in favor of another person, can be incorporated in the same Extra-Judicial Settlement of Estate. That simultaneous sale is also subject to capital gains tax.