Filipino archaeologist Armand Salvador Mijares said the discovery of the remains in Callao Cave in Cagayan province made the Philippines an important research ground on human evolution. The new species is called Homo luzonensis after the main northern island of Luzon, where the remains were dug up starting in 2007.

Beaming with pride, Mijares displayed the six fragments of bones from the feet, hands and thigh and seven teeth of three individuals from that bygone era in a news conference at the state-run University of the Philippines. Tests showed two of the fossil fragments had minimum ages of 50,000 years and 67,000 years, according to a study published by the scientific journal Nature.

“This puts the Philippines, our scientific community in the spotlight,” Mijares said. “Before, we’re just peripheral in this debate of human evolution.”

Mijares, who led a small team of foreign and local archaeologists behind the rare discovery, said he plans to resume the diggings next year and hopes to find larger fossil bones, artifacts and possibly stone tools used by people in those times. Aside from Callao Cave, human fossils have recently been found in another site in Bulacan province just north of the capital, Manila, Mijares said without elaborating.

Another veteran Filipino archaeologist, Eusebio Dizon, said the human remains from Callao were the oldest to be found in the Philippines, predating those discovered in Tabon Cave on the western island of Palawan by thousands of years. 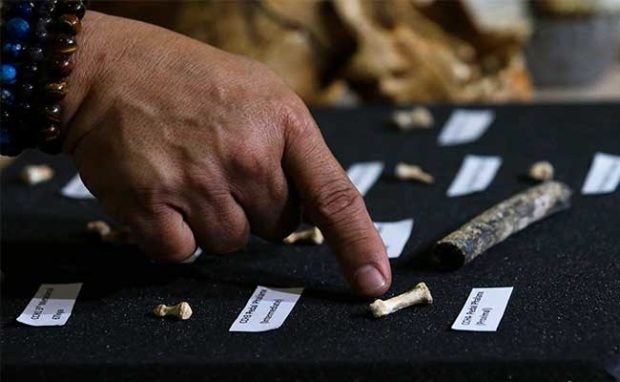 While the archaeological find could attract more scientists, Dizon worried that it could also draw vandals and treasure hunters who could threaten the seven-chamber cave complex, which is a popular tourism destination. An open-air chapel with pews and an altar in the cave complex has become a popular venue for weddings and filmmakers.

“Penablanca has been a treasure hunting haven of many people,” Dizon said, referring to the Cagayan provincial town where the Callao caves are located. “Maybe it will reignite their kind of activity so that’s why it needs protection now more than ever.”

Mice Stem Cells and the Future of Human Transplant Options

The main exodus of modern man’s own species from Africa that all of today’s non-African people are descended from took place around 60,000 years ago.

Analysis of the bones from the Callao caves led the study authors to conclude they belonged to a previously unknown member of our “Homo” branch of the human family tree. One of the toe bones and the overall pattern of tooth shapes and sizes differ from what’s been seen before in the Homo family, the researchers said.

The fossil bones and teeth found about 3 meters (9.8 feet) below the ground in the cave show they belonged to small-bodied people. Bones of deer and related animals were found in the area, some with cut marks, suggesting they were butchered although there were no stone tools or sharp implements found in the immediate area where the human fossils were dug up, Mijares said.

Although the find contributes a new insight into modern man’s ancient beginnings, Dizon said it also raised new questions and deepened the mystery behind the evolution of man.