The Future of Amazon's Cashierless Store

The Future of Amazon’s Cashierless Store

In his annual letter to shareholders, Bezos was upbeat about the prospects for Amazon Go, the stores where customers use an app to check out, with purchases scanned in the store and billed electronically to eliminate the need for cashiers. “For many years, we considered how we might serve customers in physical stores, but felt we needed first to invent something that would really delight customers in that environment,” he wrote.

“No one likes to wait in line. Instead, we imagined a store where you could walk in, pick up what you wanted, and leave.” Bezos said the implementation was complex, with specially designed cameras and shelves and new computer vision algorithms. “The reward has been the response from customers, who’ve described the experience of shopping at Amazon Go as ‘magical,'” he said. “We now have 10 stores in Chicago, San Francisco, and Seattle, and are excited about the future.”

The letter made no mention of concerns raised by some activists that cashierless and cashless stores could shut out people lacking smartphones and bank accounts.

Bezos separately challenged other retailers to match Amazon’s move for a minimum wage of $15 an hour announced last year. “We had always offered competitive wages. But we decided it was time to lead — to offer wages that went beyond competitive,” Bezos said in his letter. “Today I challenge our top retail competitors (you know who you are!) to match our employee benefits and our $15 minimum wage. Do it! Better yet, go to $16 and throw the gauntlet back at us. It’s a kind of competition that will benefit everyone.” 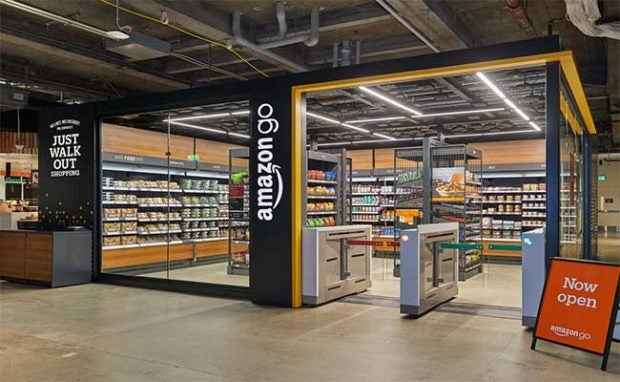 Aside from wages, a group of Amazon employees this week called on the company to be a role model for corporate action fighting climate change.

“Amazon’s leadership is urgently needed,” read an open letter to Bezos and the Amazon board signed by 4,520 company workers when it was posted on Wednesday. “We believe this is a historic opportunity for Amazon to stand with employees and signal to the world that we’re ready to be a climate leader.”

Steps called for in the letter included a complete transition away from fossil fuels and making potential climate effects a priority in business decisions.

Amazon early this year promised to share details regarding its company-wide carbon footprint along with programs to reduce it, such as striving to make shipments “net zero carbon.” “Amazon’’s sustainability team is using a science-based approach to develop data and strategies to ensure a rigorous approach to our sustainability work,” the Seattle-based e-commerce giant said in response to an AFP inquiry.

“We have launched several major and impactful programs and are working hard to integrate this approach fully across Amazon.” Amazon has a longterm goal of powering its worldwide infrastructure completely with renewable energy and has more than 200 operations scientists, engineers and product designers working exclusively on inventing ways to use its size “for the good of customers and the planet,”  the company said.