Fighting ‘scary’ superbugs with cooperation — and a special soap 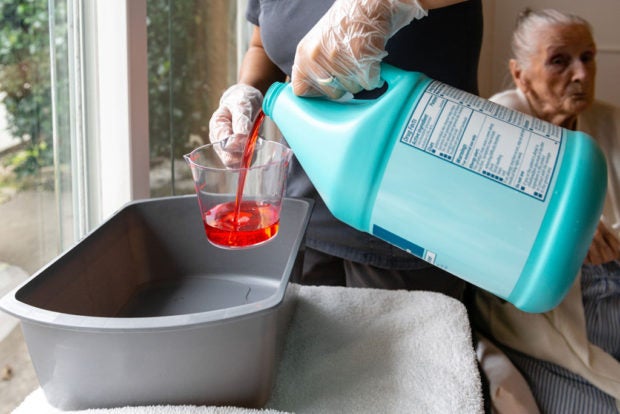 Hospitals and nursing homes in California and Illinois are testing a surprisingly simple strategy against the dangerous, antibiotic-resistant superbugs that kill thousands of people each year: washing patients with a special soap.

The efforts — funded with roughly $8 million from the federal government’s Centers for Disease Control and Prevention — are taking place at 50 facilities in those two states.

This novel approach recognizes that superbugs don’t remain isolated in one hospital or nursing home but move quickly through a community, said Dr. John Jernigan, who directs the CDC’s office on health care-acquired infection research.

“No health care facility is an island,” Jernigan said. “We all are in this complicated network.”

At least 2 million people in the U.S. become infected with an antibiotic-resistant bacterium each year, and about 23,000 die from those infections, according to the CDC.

People in hospitals are vulnerable to these bugs, and people in nursing homes are particularly vulnerable. Up to 15% of hospital patients and 65% of nursing home residents harbor drug-resistant organisms, though not all of them will develop an infection, said Dr. Susan Huang, who specializes in infectious diseases at the University of California-Irvine.

“Superbugs are scary and they are unabated,” Huang said. “They don’t go away.”

Some of the most common bacteria in health care facilities are methicillin-resistant Staphylococcus aureus, or MRSA, and carbapenem-resistant Enterobacteriaceae, or CRE, often called “nightmare bacteria.” E. coli and Klebsiella pneumoniae are two common germs that can fall into this category when they become resistant to last-resort antibiotics known as carbapenems. CRE bacteria cause an estimated 600 deaths each year, according to the CDC.

CREs have “basically spread widely” among health care facilities in the Chicago region, said Dr. Michael Lin, an infectious-diseases specialist at Rush University Medical Center, who is heading the CDC-funded effort there. “If MRSA is a superbug, this is the extreme — the super superbug.”

Containing the dangerous bacteria has been a challenge for hospitals and nursing homes. As part of the CDC effort, doctors and health care workers in Chicago and Southern California are using the antimicrobial soap chlorhexidine, which has been shown to reduce infections when patients bathe with it. Though chlorhexidine is frequently used for bathing in hospital intensive care units and as a mouthwash for dental infections, it is used less commonly for bathing in nursing homes.

In Chicago, researchers are working with 14 nursing homes and long-term acute care hospitals, where staff are screening people for the CRE bacteria at admission and bathing them daily with chlorhexidine.

The Chicago project, which started in 2017 and ends in September, includes a campaign to promote handwashing and increased communication among hospitals about which patients carry the drug-resistant organisms.

The infection-control work was new to many nursing homes, which don’t have the same resources as hospitals, Lin said.

In fact, three-quarters of nursing homes in the U.S. received citations for infection-control problems over a four-year period, according to a Kaiser Health News analysis, and the facilities with repeat citations almost never were fined. Nursing home residents often are sent back to hospitals because of infections.

In California, health officials are closely watching the CRE bacteria, which are less prevalent there than elsewhere in the country, and they are trying to prevent CRE from taking hold, said Dr. Matthew Zahn, medical director of epidemiology at the Orange County Health Care Agency. “We don’t have an infinite amount of time,” he said. “Taking a chance to try to make a difference in CRE’s trajectory now is really important.”

The CDC-funded project in California is based in Orange County, where 36 hospitals and nursing homes are using the antiseptic wash along with an iodine-based nose swab. The goal is to prevent new people from getting drug-resistant bacteria and keep the ones who already have the bacteria on their skin or elsewhere from developing infections, said Huang, who is leading the project.

Huang kicked off the project by studying how patients move among different hospitals and nursing homes in Orange County, and discovered they do so far more than imagined. That prompted a key question: “What can we do to not just protect our patients but to protect them when they start to move all over the place?” she recalled.

Her previous research showed that patients with the MRSA bacteria who used chlorhexidine for bathing and as a mouthwash, and swabbed their noses with a nasal antibiotic, could reduce their risk of developing a MRSA infection by 30%. But all the patients in that study, published last month in the New England Journal of Medicine, already had been discharged from hospitals.

Now the goal is to target patients still in hospitals or nursing homes and extend the work to CRE. The traditional hospitals participating in the new project are focusing on patients in intensive care units and those who already carried drug-resistant bacteria, while the nursing homes and the long-term acute care hospitals perform the cleaning — also called “decolonizing” — on every resident.

One recent morning at Coventry Court Health Center, a nursing home in Anaheim, Calif., 94-year-old Neva Shinkle sat patiently in her wheelchair. Licensed vocational nurse Joana Bartolome swabbed her nose and asked if she remembered what it did.

“That’s right — it protects you from infection.” 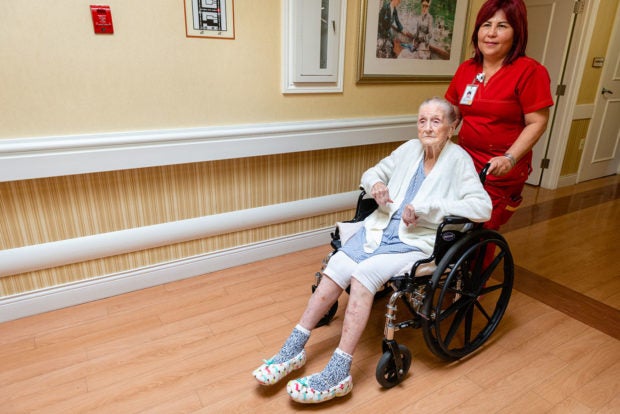 A nurse at Coventry Court Health Center in Anaheim, Calif., wheels Neva Shinkle to her room to be bathed with a special soap to help fight infections. (Heidi de Marco/California Healthline)

In a nearby room, senior project coordinator Raveena Singh from UC-Irvine talked with Caridad Coca, 71, who had recently arrived at the facility. She explained that Coca would bathe with the chlorhexidine rather than regular soap. “If you have some kind of open wound or cut, it helps protect you from getting an infection,” Singh said. “And we are not just protecting you, one person. We protect everybody in the nursing home.”

Coca said she had a cousin who had spent months in the hospital after getting MRSA. “Luckily, I’ve never had it,” she said.

Coventry Court administrator Shaun Dahl said he was eager to participate because people were arriving at the nursing home carrying MRSA or other bugs. “They were sick there and they are sick here,” Dahl said.

Results from the Chicago project are pending. Preliminary results of the Orange County project, which ends in May, show that it seems to be working, Huang said. After 18 months, researchers saw a 25% decline in drug-resistant organisms in nursing home residents, 34% in patients of long-term acute care hospitals and 9% in traditional hospital patients. The most dramatic drops were in CRE, though the number of patients with that type of bacteria was smaller.

The preliminary data also shows a promising ripple effect in facilities that aren’t part of the effort, a sign that the project may be starting to make a difference in the county, said Zahn of the Orange County Health Care Agency.

“In our community, we have seen an increase in antimicrobial-resistant infections,” he said. “This offers an opportunity to intervene and bend the curve in the right direction.”