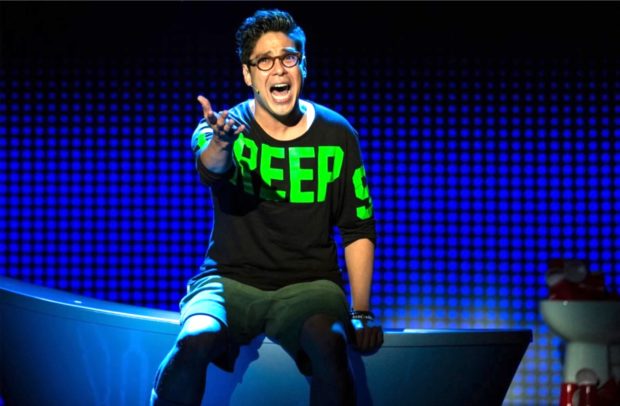 George Salazar originated the role of Michael Mell in the musical “Be More Chill.” MARIA BARANOVA

He’s a theater actor who currently plays a character who sings in a bathroom in a science fiction musical on Broadway.

The musical’s title is “Be More Chill” and it’s based on Ned Vizzini’s 2004 young-adult novel about high school junior Jeremy who swallows a supercomputer (in pill form) that instructs him how to be cool.

Salazar plays Jeremy’s best friend Michael Mell. A song that he sings in the show—titled, well, “Michael in the Bathroom”—is what has made him very popular with the teenage demographic.

The pop-rock musical adaptation has music and lyrics by Joe Iconis and book by Joe Tracz.

Salazar has been with the show since its first incarnation in 2015. After its world premiere by Two River Theater in New Jersey, a cast album was produced. 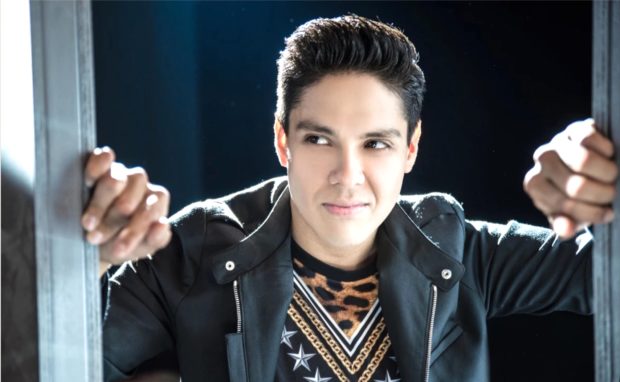 With no advertising or promotions, by 2017, the album had been streamed over a 100 million times by teenage fans worldwide.

The fandom spawned fan art and fan fiction on Tumblr and Reddit as well as fan-animated (called “fanimatics”), fan-lip synced and fan-interpretations of the show’s songs on YouTube.

The online fanbase’s numbers and enthusiasm prompted the show’s creators to produce an Off-Broadway run last year. It sold out with ticket-buyers from all 50 states and all five continents.

The successful turnout paved the way for the show’s transfer to Broadway.

Throughout the years, Salazar’s embodiment of the Michael Mell character has resonated with fans, online and otherwise.

To wit: he now has more than 36,000 followers on Twitter and 150,000 followers on Instagram. A video of his rendition of “Michael in the Bathroom” posted (back in 2017) on YouTube has garnered 3 million views.

“It is a truly overwhelming feeling to know that the art that I created with friends in a theater in New Jersey back in 2015 has become this beacon of love, acceptance, visibility, and hope for so many young people,” he says.

“I make it a point to look each of those young people in the eye after the show at the stage door because somewhere in the crowd is a person who has been told they’re too weird. In the next few years, they’ll better understand their full potential and grow up to be someone who makes an impact.

“It’s an honor to be a part of something like this. And to feel their energy, excitement, and exuberance night after night.”

Salazar’s interest in acting began in high school because of a friend’s prodding.

“During my junior year, I was a bit of a class clown. I would rewrite lyrics to pop songs to make my classmates laugh. Some were appropriate, most were not.”

One of his songs caught the ear of his friend Donald Rupe. “He came up to me and asked me to audition for the school musical ‘Little Shop of Horrors.’ I went and was cast as Seymour. I never looked back from then.”

He went on to study musical theatre at University of Florida. His credits include “Here Lies Love” (a musical about Imelda Marcos), “Godspell,” “tick, tick…BOOM!,” “The Lightning Thief: The Percy Jackson Musical.”

Salazar was born in Orlando, Florida to a Filipino mother and Ecuadorian father.

“Growing up as a first generation American, I was being groomed to go into medicine. My dream was to be a neurosurgeon, but life has a funny way of throwing curveballs that make you reassess.

“I now know that I found my calling, my purpose as an entertainer and I am so grateful I did.”

The awkwardness of high school may be a universal experience, but Salazar imbues Michael Mell with an added layer for theatergoers to relate to. Salazar (right) in a scene from “Be More Chill.” MARIA BARANOVA

“In the novel by Ned Vizzini, Michael is a white kid with a red ‘fro,” he explains. “I am so grateful to the creative team for taking such a risk by casting me.

“It feels like a tremendous responsibility, one that I cherish and care immensely about, to represent not just Asian and Latin heritage, but also represent what it means to be mixed race in America.”

He recalls that growing up was a “tricky time” for him. “I didn’t feel like I fully fit in with either sides of my heritage and I was also coming to the realization that I was gay.”

“I experienced an identity crisis that stunted me a bit, but I’ve learned to embrace my differences. These things make me unique, special and like no one else.

“And so it’s become my mission to use this moment as a bit of a platform to encourage brown kids, gay kids, trans kids, kids who feel left out, who feel a little weird—to own their weirdness and trust themselves.”

Salazar isn’t just taking advantage of the show’s popularity to encourage the youth, he’s also welcoming parents to use it as a way to connect with their children. 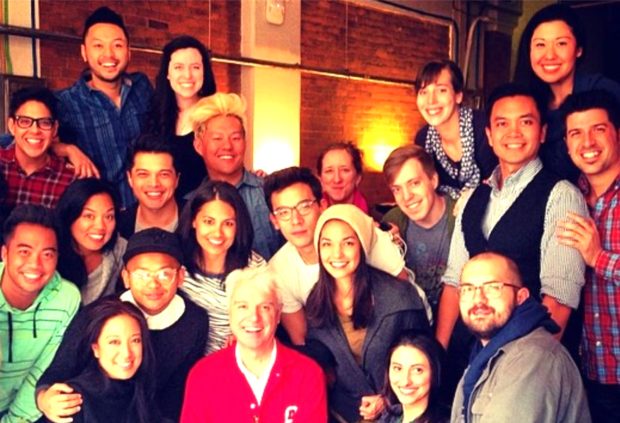 “One of the things I’ve loved the most … is watching this show bring parents and their kids closer together,” he says. “I’ve met hundreds of parents who talk about how the show has opened up a dialogue with their kids.”

“Teenagers are, by nature, incredibly angsty and volatile. Hormonal changes make them crazy! But this show has become something that parents and their kids can enjoy together.

“This musical is not just for teenagers. We’ve all been there, we’ve all experienced the nightmare of high school; it’s universally relatable. High school is hard. It was hard when I went through it and it’s hard for young people now.

“It’s so easy to feel like those years are the only thing that matters, but I like to think our show disproves that. And that it shows everyone that what’s most important is staying true to themselves.

“Parents experiencing that with their kids, I think, can help strengthen that bond in a really beautiful way.”