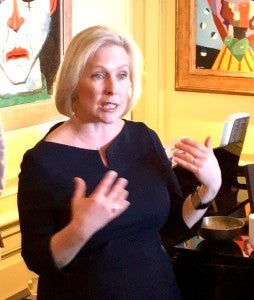 Sen. Kirsten Gillibrand (D-New York) met Filipino American supporters ahead of the 2018 midterm polls, where she is up for reelection. INQUIRER/Elton Lugay

“I want to welcome you to the Reginald Lewis family,” a beaming Mrs. Lewis told the incumbent New York senator in the presence of about 50 Fil-Am lawyers, businessmen and community leaders gathered at the former’s Fifth Avenue home.

Lewis recalled Gillibrand’s historic win in the 2012 special election, which saw the 50-year-old senator winning 72 percent of the vote, the highest margin for any statewide candidate in New York state.

She noted that Gillibrand was the first member of Congress to post online her official daily calendar, personal financial statement and federal earmarks, to which the senator chimed in “All my taxes.”

This elicited laughter and applause from the mixed crowd of millennials and baby boomers. 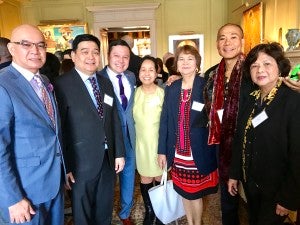 “It’s been a very difficult time in Washington as you can imagine,” the lady senator from New York’s 20th district told them.

“It’s a time unlike we’ve ever really seen. President [Donald] Trump has really taken on basic institutions in a way that makes New Yorkers feel anxious and concerned,” she added.

“People want to make a difference and in fact they are, and what’s really remarkable despite all of this discord in Washington is that people are rising up, people are being heard, people are marching,” Gillibrand said.

She described the 2017 Women’s March, a global protest action held last January, as a powerful way to express misgivings about the status quo.

“My favorite sign on the march was this grandma with a sign that says ‘I can’t believe I’m still doing this’ which is understandable; she’s been fighting for a long time. But for all of us, it’s our moment to be heard. And I think that people are taking that moment,” she added.

Companies have begun using their advertising dollars to voice out their concerns on issues that matter, Gillibrand noted. She mentioned a car company ad during the Super Bowl, which tackled equal pay rather than try to sell cars, and a beer company that did an ad on immigration.

She called on Fil-Ams at the event to spread the word about what they care about and what needs to change “because truly the only way to overcome this hate-filled rhetoric is with our human spirit, with the love we have for one another, with what we care so deeply about, and our willingness to fight for it.”

Angie Cruz, one of the benefit committee members who helped organize the event, asked how she might deal with perceptions that the senator has a lot of money and is going to win the election anyway, and so would not need the community’s support. 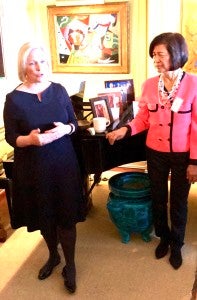 I want to know what we should say if this question comes up. Loida and I were at the breakfast reception Friday for Jonathan Russell and I was inviting some of the women there to come today and one of them said, ‘Oh, she doesn’t need our money. She will win. She’s already up there. She already has a lot of money. She doesn’t need us. Other Democrats need us now.’ What do we answer?”

Gillibrand’s reply: “You should tell your friends they should support the campaigns that are pulling their hearts the most, the candidate that they share their values the most, and certainly help our colleagues in those red states [Republican-dominated states] because they desperately need it. And it’s a way for New Yorkers to show that we’re actually an outsized influence or voice in national elections because I promise you it’s going to go a long way.”

The senator hopes to raise $10 to 15 million this year and to establish a comfortable lead in order to minimize expenses for the New York seat. Her goal is to spend the money to help Democrats win in Republican-dominated states.