Disney, which showcased what it expects to be a string of blockbuster hits this year at the CinemaCon industry event, indicated it wants to keep the Alfred Newman composition that has become a trademark for Fox productions.

“Disney and Fox combined history and the future,” said Alan Horn, chairman of Walt Disney Studios, at the Las Vegas industry gathering. “We are truly excited because we believe that together we will be more.” The Disney-Fox combination currently has five of the top 10 global box office hits and six of the top 10 in the US and Canada.

Disney #CinemaCon roundup: Following the Fox acquisition, the studio said to expect "more Deadpool in the years ahead." pic.twitter.com/fTmaXaYv9u

Disney executives said the Fox fanfare would remain and also expressed a desire to promote the Fox Searchlight brand, which has garnered 39 Oscars in its 25 year history. The team has “an unbelievable collection of stories, characters and roles to explore,” Horn said.

Fox and Disney have 22 major releases for this year including the latest  “Captain Marvel” and upcoming “Avengers: Endgame,” due out April 26. The lineup also includes titles such as “Dumbo,” “Aladdin,” “Lion King,” “Frozen II,” and “Star Wars Episode IX.”

“Dark Phoenix” is the latest installment of the X-Men franchise from Fox, followed by the action comedy “Stuber” about an Uber driver hired to help a police detective. Later this year comes the release of “Ford v. Ferrari” about the battle of the two automakers to win the 24 Hours of Le Mans 1966.

The first of the Fox studio releases will be “Breakthrough,” based on the story of a miraculous rescue of a teenager after a fall through the ice on a lake. The presentation by Disney executives at CinemaCon was low-key, with no major stars brought out to promote the new releases. 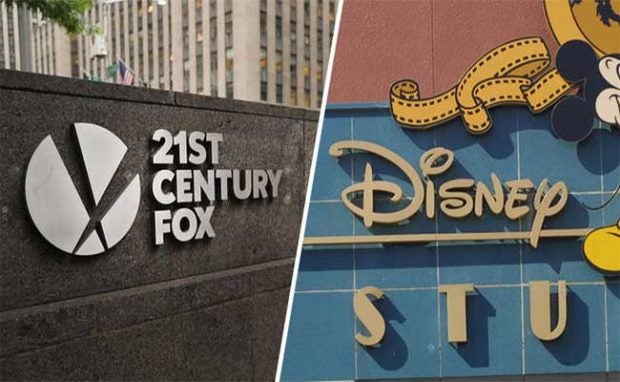 Disney finalized its deal on March 20 for the Fox studio and other media-entertainment assets of Rupert Murdoch’s 21st Century Fox including the FX and National Geographic channels.

Disney paid $71 billion and prevailed in a bidding war with cable and media giant Comcast, in a deal that left Murdoch with a slimmed-down media group centered around the Fox News Channel and broadcast network.

“The biggest news in the era of big news is welcoming the Fox team to Disney,” said Cathleen Taff, head of distribution for Disney studios. “We are very proud of both studios,” she said, while noting that “some adjustment” would be made as a result of the merger. Emma Watts, vice president of 20th Century Fox, told the gathering that the teams were still adapting to the just-completed merger.

“We’ve stood on this stage as competitors for many years so it’s a bit of shock to be here as colleagues,” Watts told the gathering of producers, distributors and movie theater owners. “The good news for all is that the formula for a good movie and the role of a studio in that process remain the same.”

Exclusive: A Peek at How Disney Resort Shows Are Crafted

Watts added she believes the Fox legacy is very much alive following the deal. “With the vast resources of the Walt Disney Studio behind us we are ready to write our next chapter,” she said.

Looking ahead, the Hollywood powerhouse is planning to release “Avatar 2” in 2020 and is planning for new films in the “Planet of the Apes” and “Alien” franchises. The gathering this week also featured presentations from the other big Hollywood giants, Universal and Paramount.