Wells Fargo Chief Executive Tim Sloan, a frequent target of critics following a series of lapses by the bank, is stepping down from his post “effective immediately,” the bank announced Thursday.

Sloan, who was promoted to CEO from president in October 2016 following a fake accounts scandal, also will leave the board immediately, and will retire from the company June 30, Wells Fargo said in a statement.

About damn time. Tim Sloan should have been fired a long time ago. He enabled Wells Fargo's massive fake accounts scam, got rich off it, & then helped cover it up. Now—let's make sure all the people hurt by Wells Fargo's scams get the relief they're owed. https://t.co/l7dYmBWRBo

The board elected General Counsel Allen Parker to serve as interim CEO and president while the bank undertakes an external search for a new chief.

Sloan touted reforms he spearheaded at the nation’s third biggest bank by assets since the fake accounts scandal broke two and a half years ago. The company replaced several key executives, scrapped compensation incentives that encouraged selling, and enhanced compliance training.

Wells Fargo has settled a number of regulatory cases, although it remains under a Federal Reserve asset cap imposed following the problems. But though he was not CEO during the fake accounts scandal, Sloan has faced continual pressure from Democratic Senator and presidential candidate Elizabeth Warren and others in Congress for the bank’s behavior, which she blamed on him as well. 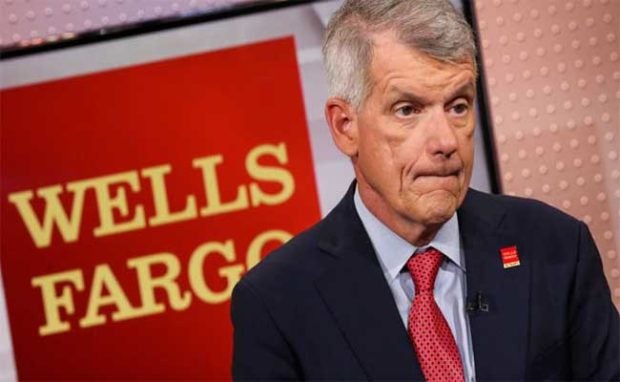 “About damn time,” Warren said on Twitter moments after the announcement.  “Tim Sloan should have been fired a long time ago. He enabled Wells Fargo’s massive fake accounts scam, got rich off it, & then helped cover it up.” Sloan appeared at a House hearing two weeks ago where he faced sharp question from lawmakers of both parties.

He said the company “has made progress in many areas,” according to a Wells Fargo statement. “While there remains more work to be done, I am confident in our leadership team and optimistic about the future of Wells Fargo,” Sloan said. “However, it has become apparent to me that our ability to successfully move Wells Fargo forward from here will benefit from a new CEO and fresh perspectives.” Shares of Wells Fargo rose 2.6 percent to $50.35 in after-hours trading.