California’s governor explains why he has halted executions

California’s governor explains why he has halted executions

SAN FRANCISCO – California’s new governor Gavin Newsom explained why he issued a moratorium on the death penalty in the state during a tele-briefing with ethnic media, pointing out that he has always been a strong opponent of the death penalty.

Newsom had been in office as governor for less than three months when he issued the March 13, 2019 moratorium on the execution of convicts on the death row. 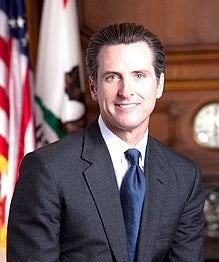 This raised eyebrows and howls of protest from those who remembered that Californians cast their ballots defeating measures in 2012 and in 2016 for the abolition of the death penalty and the automatic commutation to life sentences without parole. A proposition was even passed in 2016 calling for a shortened appeals process to speed up of executions.

With the moratorium, some 737 convicts on death row will be granted a stay in their executions during Newsom’s term in office.

The execution chamber that includes the gas chamber at San Quentin Prison will be closed, and the state’s lethal injection protocol, the state’s formally approved procedure for carrying out executions, will be eliminated.

Defending his decision, Newsom reiterated that he has been crystal clear in his opposition to the death penalty. He believes not only in rehabilitation, but also in social, economic and racial justice.

“I believe fundamentally it (death penalty) is unfair by definition and is wasteful. Since the 1970s, 13 people were executed that I think fundamentally was unfairly applied not just on people of color, but also on people with mental disabilities and those who simply could afford the right kind of representation,” stated Newsom. He added that being responsible for signing off on the executions as governor that would weigh heavily on him.

Opponents of the death penalty argue that it is ineffective, irreversible, immoral and goes against the very values that Americans stand for.

Newsom’s early decision on moratorium was precipitated by pressure to proceed with the previous administration’s lethal injection protocol as early as April.

Since 1778 to 1972, California has had 709 executions with the last meted on 76-year-old legally blind, diabetic and wheelchair-bound Clarence Ray Allen, who was served the lethal injection in January 17, 2006.

“California has 737 people on the death row, the largest in the Western hemisphere and not just in the United States of which 66.49% are people of color disproportionately black and Hispanic. We have not had executions since 2006. Since 1978 when death penalty was restored in California, only 13 people were executed but interestingly, 120 others have died, while on death row, either of natural causes or of suicide. We currently have 25 individuals that have exhausted all their appeals… that we are entrusted to execute,” reported Newsom.

Newsom also stated that 164 people have been wrongly convicted in the United States since 1973 with five in California who are all people of color, including Vicente Figueroa who was exonerated after serving almost 26 years on death row.

“We spent $5 billion since 1978 in California on this protocol. Considering the 164 that were wrongly convicted since 1973, the National Academy of Sciences did a study not too long ago that estimated that 1 of 25 people on death row in the U.S. are likely innocent,” Newsom laments.

Using that statistics, Newsom estimated it would mean that around 30 of the 737 people on the death row were wrongly convicted and would have been executed for crimes they did not commit.

Newsom also cited that if all 737 were put to death, there would be one execution daily for over two years, or executions of up to 14 years if there were executions weekly if all appeals were to be exhausted..

“Let me remind everyone that no one is being released and sentences have not been commuted. We are not arguing against the heinous nature of many of these crimes. I have read over 230 of the crimes that have been committed that in some detail were gruesome and horrific. I don’t take this lightly and I am not here to celebrate this action. It weighs heavily on my conscience and I know what it does on others,” Newsom underscored.

The governor also lamented that the U.S. has executed more human beings than any democracy in the world and that it has aligned with death penalty-enforcing countries that the U.S. tends to malign due to human rights abuses.

Newsom added that the evidence is overwhelming that death penalty is not a deterrent and maintained he could cite study after study to support that claim.