Would-be diplomat for gov’t became one for God instead 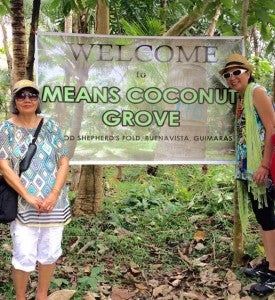 With a foreign service degree from the University of the Philippines, Catalina “Lina” Padilla could have been an official in the diplomatic community, but she chose a different path to serve the Filipinos.

Since 1983, Lina has been serving MEANS (Missions: East Asian National Support), a charitable organization based in Illinois, which actively empowers depressed communities in the Philippines and supports churches and non-governmental organizations.

“Becoming a US citizen does not mean I forgot my homeland. It was in the US that I was given the opportunity to help my ‘kababayans’ through MEANS,” Lina explains.

Lina’s family immigrated to America in the early ‘60s. Lina chose to stay because she was focused on her work at the Inter Varsity Christian Fellowship (IVCF) of the Philippines.  It is a Christian ministry among students in various high school and college campuses in Manila.

When her father died, she was not able to attend the funeral. So she decided to process her papers to be with her aging mother. She arrived in America in 1982.

“I was awed by the many choices that people here have.  I remember going to a grocery store to buy coffee and I saw the numerous brands of coffee to choose from. What struck me most was the privacy of Americans, which I mistook for being selfish and individualistic, but I later realized that many are also friendly and kind,” Lina recalls.

Integration in the American society

If majority of the immigrants experienced difficulties in finding jobs, Lina’s qualifications paved ways for opportunities.

Lina was hired at Gordon Tech High School Library, a Catholic Boys high school, in Chicago. She mentions that there was a Filipino Club in the school.

With a newfound freedom, Lina could move around without worrying that men would bother her. 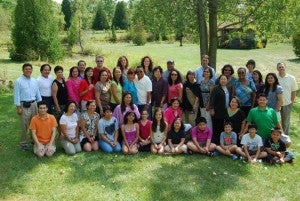 MEANS Volunteers during aretreat in the United States. CONTRIBUTED

“I like the freedom to be able to be myself, express myself and improve myself. There are a lot of opportunities here which I think will improve one’s quality of life if one works hard for it,” Lina stresses.

Lina transferred to Northwestern University School of Law Library as Serials Manager and in charge of the American Bar Association Archives. She retired in 2014 after working for 25 years.

Despite having good relationships with American colleagues, Lina still longed for Filipino fellowship. She found former members of IVCF. They started a group called IVCF Cares and met regularly for fellowship, service, helping and supporting each other, and even fundraising for IVCF Philippines. She had also helped in organizing “Balikatan ng mga Kristiyano” in 1983. Similar groups were formed in Eastern and Western Canada.  They still regularly hold annual and regional meetings.

“I am sure that all these involvements in community organizing helped me to adjust when migrated to America,” Lina says.

In 1982, Lina met the founder of MEANS, Rev. Dr. Teofilo Tolentino, a pastor and a psychologist from the University of Chicago. Rev. Tolentino invited her to a leadership team, which she accepted because of the challenge to help the Filipinos and some countries in Asia.

MEANS is a charitable organization recognized by the state of Illinois and the US federal government.  Individuals from the United States (only) can give donations for churches, missionaries and Christian NGOs to MEANS.  The organization issues a tax-deductible receipt to them for their donations.

To date it has 30 volunteers who are all working professionals from Chicago, California, Michigan and New Mexico. Every third Saturday of the month is the “workday” where the volunteers meet and process donations and pack goodies and learning materials in “balikbayan” boxes for the beneficiaries.

The organization collaborates with different partners such as schools, communities and churches. Their projects called “gifts” include rice, scholarships, books to school children and prisons, trees to communities and flip-flops. 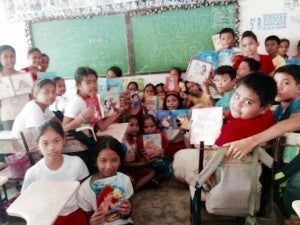 A school in San Carlos, Negros, Occidental benefited from books and other goodies through the MEANS project. CONTRIBUTED

Lina serves as the board chair of MEANS and Carmena Cruz, also a Filipina, is the president.

“We at MEANS believe that preaching the Gospel has social and spiritual dimensions. MEANS stand by three purposes:  Spread the Gospel of the Lord Jesus Christ, help the needy and partner with missionaries” Lina says.

On behalf of MEANS, Lina is grateful to the Filipino Americans and Americans who continuously share with the organization.

“The gifts go a long way in the Philippines.  The people in the community are hardworking and appreciate the gifts they received. The coconut trees are already productive and the sales from those help the school. Some scholars already graduated from college. The books that had been gathering dust in your bookshelves are now read by many students,” Lina proudly says.

Lina said, “The prisoners who were visited by our ministry partners remarked ‘It is good to know that you still remember those who are in prison and that you have not forgotten us.’”