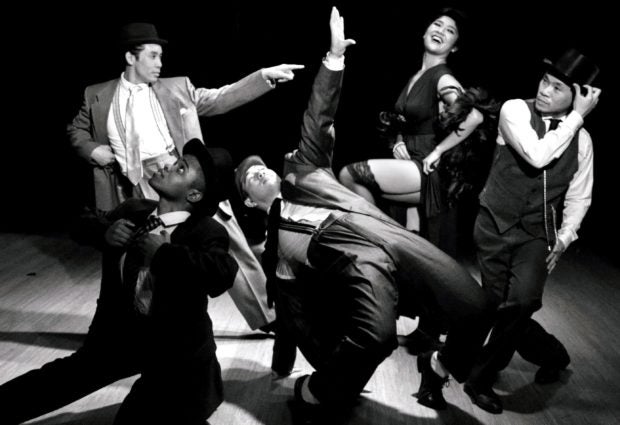 Dancers rehearsing a movement from “In the Belly of the Eagle: [email protected] is Deity.” WILFRED GALILA

SAN FRANCISCO — Filipino Americans from San Francisco’s past are the focus of a new full-length dance piece by Fil-Am choreographer Alleluia Panis.

“In the Belly of the Eagle: [email protected] is Deity” is inspired by real-life accounts of Fil-Ams who lived in San Francisco from the 1920s to the 1960s.

Fil-Am performing arts group Kularts, of which Panis is artistic director, will stage a workshop production this month at Bindlestiff Studio. Aimee Amparo (second from left) as Divine Mother and Ladislao Arellano as Pablo Valentin in “In the Belly of the Eagle: [email protected] is Deity.” WILFRED GALILA.

The ensemble piece features the character Valentino Pablo, who is of the manong generation—a blanket term for Filipinos, mostly male, who immigrated to the U.S.  from the 1920s to the 1930s and worked in farm crop harvesting, fish cannery and other blue collar jobs.

In a statement, the show is described as portraying “the 8,000-mile immigration journey to America and the resilience of the Pilipino people.”

“Pablo experiences vivid moments of his early 20th century American life: he and his fellow Pilipinos bonding together to ease their struggles of living in a society that values them for their cheap labor but loathes them and denies their humanity, the bitter hardships, the fleeting joys, and their determined spirit of survival and camaraderie that defines his generation.”

The multi-awarded Panis has choreographed more than 20 full-length dance theater works. Recent credits include “Incarcerated 6×9,” “She, Who Can See” (which she also adapted into a film), and “Ibig, Pulse of Desire.” “My main inquiry for this piece,” says Panis, “is the experiences of the diaspora living in the United States—the country who subjugated our people as its colony for decades and continues to exert its economic, military and cultural power over the Philippines.”

The eagle in the work’s title represents the United States while the term “[email protected]” is Panis’ gender-neutral spelling for the Filipinos, women and men, who immigrated to the US in the first third of the 20th century.

“The ‘[email protected]’ generation is our deity in the diaspora,” she explains.

She began developing this piece in 2017. Her research included interviewing fourth and fifth generation Filipino

Americans “to hear about their Pilipina great-grandmothers and grandmothers.”

“There are many stories about the manongs but we rarely hear about the manangs who came prior to 1950s. If there was one Pilipina for every 20 Pilipino immigrants, I wanted to know more about their stories.”

Panis says she also wanted to explore questions such as, “Why do we stay [in the US] despite our marginalization as an immigrant population in the country of our former colonizer/subjugator?”

“What keeps us doing so? Why do we continue to suffer these challenges? Why not simply just go back home [to the Philippines]? How do we empower ourselves in a society who treat us as second-class citizens?”

Singer and healer Aimee Amparo will dance the role of the Divine Mother. Dancing the role of Pablo is Ladislao “June” Arellano, who is a principal dancer at Parangal Dance Comapny. Arellano will also handle costume design for the production. The production features music by Joshua Icban and video design by Wilfred Galila.

Galila’s films have been screened at the Los Angeles Asian Pacific Film Festival and the Asian Art Museum in San Francisco. His recent collaborations with Panis include “She, Who Can See” and “Incarcerated 6×9.”

This workshop production of “In the Belly of the Eagle: [email protected] is Deity” is a recipient of a Special Art Award grant from the Wallace Alexander Gerbode Foundation.