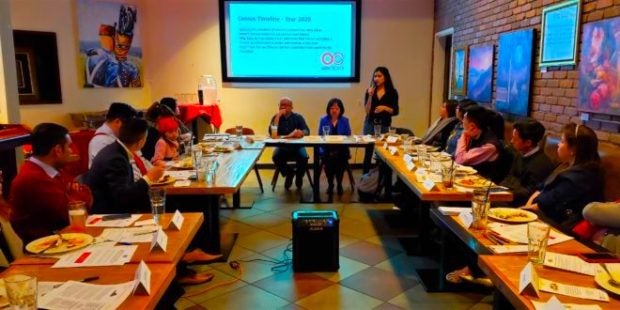 Marita Etcubanez, policy director of the Asian American Justice Center (AAJC), points out that “being engaged is being counted.” MANILA MAIL

WASHINGTON, DC — In three separate events on March 7 at the nation’s capital, Filipino American leaders and advocates from the Philippines called on the community to step out from the sidelines and become more engaged in the pressing issues of the day: the 2020 US Census, immigration, human rights and the upcoming national elections both in the US and the Philippines.

At Bistro 1521, a Northern Virginia Filipino restaurant 20 miles away from the White House, more than 20 leaders representing a dozen organizations tackled topics such as naturalization and citizenship, local and national legislation, the 2020 census and national elections. They also shared ideas on how they can work together to address these issues.

A veteran labor activist, Maralit stressed the importance of “increasing the electoral power of AAPI communities” and ensuring that “we make links between this emerging, diverse electorate with all allied communities, to become stronger together.” He cited voter education and voter registration as effective ways of strengthening these partnerships.

Filipino Young Professionals President Stephanie Wong, speaking on behalf of the Organization of Chinese Americans (OCA), discussed why the 2020 Census matters for Asian Americans. “The consequences of undercounting our community will put our families and neighborhoods at a disadvantage,” she said. “This means getting less than our fair share of government resources, including for education and health care.” She also noted that Asian American advocacy and civil rights groups are fighting the inclusion of the citizenship question in the census.

Marita Etcubanez, policy director of the Asian American Justice Center (AAJC), pointed out that “being engaged is being counted.” She said there are 9 million lawful permanent residents who are eligible to become US citizens, but less than 10 percent naturalize each year. She called on community leaders to encourage naturalization efforts and highlight the benefits of citizenship, notably the right to vote. 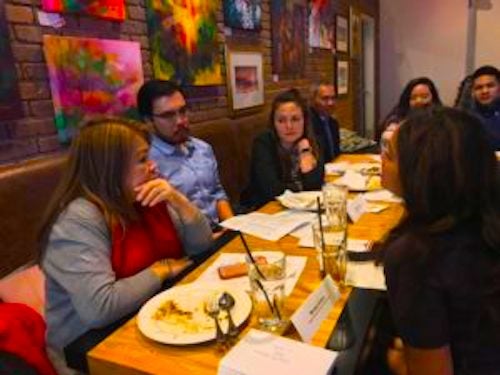 In the course of the evening, small group discussions focused on the question: “How has immigration and naturalization affected your own personal lives, or those you work with?”

‘It’s going to get worse”

In an adjoining room at the same restaurant, another group of Filipino Americans listened to a presentation by Carlos Conde of Human Rights Watch in the Philippines. He provided an update on the Duterte administration’s human rights abuses and their effects on the population.

“Duterte’s election was a textbook case of exploiting people’s frustrations, telling the Filipino people that if they voted for him, he will kill all the drug lords and drug dealers that are poisoning the country,” he said. “He told the people that ‘you’ve been in hell and you didn’t realize it,’ blaming previous administrations for the nation’s problems.”

He added: “It’s going to get worse before it gets better. Even after Duterte is gone, Filipinos will continue to suffer. We have to continue having conversations like this and engage more people to understand what’s really happening.”

Before joining Human Rights Watch, Conde worked as a journalist for 20 years, nearly half of that time as the freelance correspondent in Manila for the New York Times and the International Herald Tribune. Prior to that, he worked as a reporter and editor for various publications in the Philippines. His work – much of it about politics and on such issues as human rights, the communist and Islamic insurgencies, terrorism, and labor migration – has appeared in several publications in the Philippines and abroad.

Also speaking out on the human rights crisis in the Philippines was Cristina Palabay, a human rights advocate on the front lines. She addressed dozens of activists who gathered on the same night at Bus Boys & Poets, a downtown restaurant and coffee shop, which also serves as “a cultural hub where racial and cultural connections are consciously uplifted.”

Palabay called on the community to be in solidarity with those who are concerned and critical of the Duterte administration. “Duterte is an inevitable result of a system that is failing,” she said. “The system is convulsing. It generates tyrants like Duterte. He played the populist game…promised higher wages to teachers and nurses, but only the police and military got the raises.” 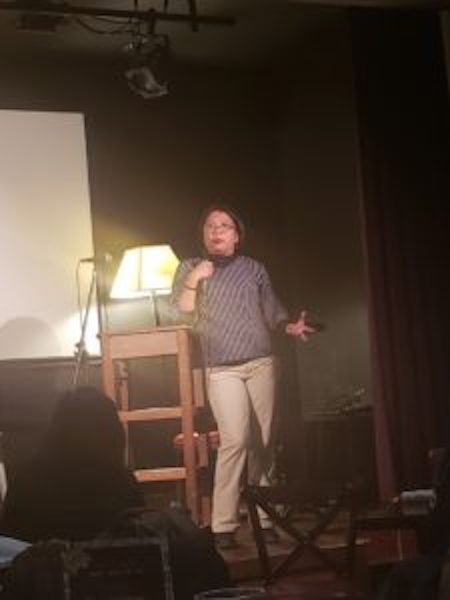 “We can no longer divide ourselves,” she added. “If we face disunity, that would be a problem. The enemy is a well-oiled machine. You must be relentless and creative.”

She pointed out the reality facing the Filipino people today and what must be done: “If we want to change minds, change the system, it’s the life we must live.”

Palabay’s national tour, which kicked-off in Chicago, is sponsored by Amnesty International, Kapatid, and the International Coalition of Human Rights in the Philippines (ICHRP). These organizations are campaigning to stop US aid to the Duterte administration. Other sponsoring groups include Kamalayan, Migrante DC and Gabriela DC.

Organizers have billed this event as “a learning opportunity for direct solidarity with women leading the struggle for justice in the Philippines.

Palabay, 37, is the head of Karapatan, an alliance of human rights groups in the Philippines. She is also a regional council member of the Asia Pacific Forum on Women, Law & Development and an advisor to Urgent Action Fund for Women’s Rights.