NEW YORK — The world premiere of “Dying in Boulder” by Fil-Am playwright Linda Faigao-Hallis being presented by Tony-award winning regional theater La MaMa, with Out of the Box Theatrics.

Directed by Ian Morgan, the play opened at La MaMa’s The Downstairs on March 3 and runs until March 17.

In a quest for a “good death,” a dying Caucasian-American Buddhist in Boulder, Colorado enlists her reluctant mixed-Filipino family in micromanaging her impending funeral rites. “Dying in Boulder” is a comic but moving exploration of American cultural confusion around aging and dying – and people’s inability to control either.

The play was inspired by circumstances within Faigao-Hall’s own family. She shared with Blastingnews.com how her Caucasian-American sister-in-law, who was a baptized Buddhist, was diagnosed with breast cancer.

“I was there attending to her care during her last week,” said the playwright. “She arranged for Tibetan Buddhist funeral rites; at that time, I was a practicing Catholic and was directly involved with the rituals.”

Faigao-Hall said writing plays has long been her passion.

“I’ve been writing plays since I was a child in the Philippines. It was always a passion. I continued to pursue it when I immigrated in 1971. My first production was in 1984. I haven’t stopped writing,” she said. 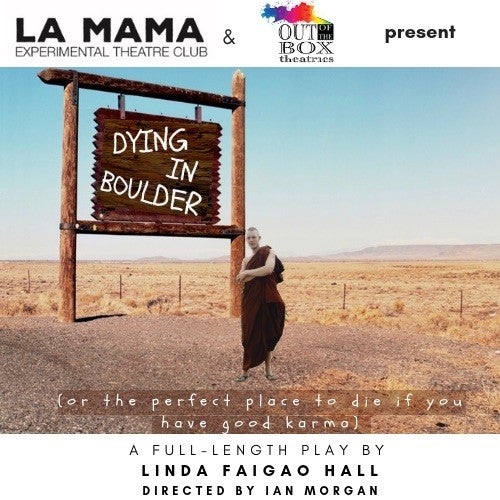 Linda Faigao-Hall has been produced on the East and West coasts and abroad. Her plays include “The Female Heart” produced by Diverse City Theater Company & Ensemble Studio Theater on Theater Row, NYC and at UP Diliman Theater, Philippines.

An anthology of her plays “The Female Heart and other Plays” was published by No Passport Press in New York; she has appeared in The Best Ten-Minute Plays of 2008, Smith & Kraus and The Savage Stage – The Best Plays of Ma-Yi, New York.

Director Ian Morgan is Associate Artistic Director of The New Group. In addition to overseeing the company’s mainstage season, he created and runs the NewGroup/NewWorks play development program and education programs for all ages, including the Scene 1 program for teens. He has developed many plays for the company, produced and directed in the New Group (Naked) second stage series, and directed the Drama Desk Award-nominated premiere of “The Accomplices.” Also as a director, he has mounted new work in New York at 59E59, Soho Playhouse, Stella Adler Studios, Abrons Art Center, HERE, and Theatre Row, where he premiered Linda Faigao-Hall’s play “Sparrow.”

Out of the Box Theatrics was founded in 2015 by Elizabeth Flemming with a mission to encourage artists and audiences to view theatre from a new angle (“outside the box”). La MaMa has a worldwide reputation for producing daring performance works that defy form and transcend barriers of ethnic and cultural identity. Founded in 1961 by award-winning theatre pioneer Ellen Stewart, La MaMa has presented more than 5,000 productions by 150,000 artists from more than 70 nations. A recipient of more than 30 Obie Awards and dozens of Drama Desk, Bessie, and Villager Awards, La MaMa was awarded the 2018 Regional Theatre Tony Award. @The FilAm