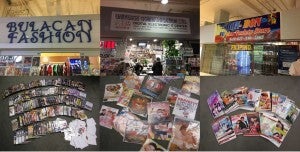 (Top row, left to right) Bulacan Fashion, Universe Communications and Bon-Bon were among the six stores in Montreal and Toronto that recently surrendered hundreds of pirated DVDs of ABS-CBN content following a raid by law enforcement officers. (Bottom row, left to right) samples of the pirated DVDs that the stores were illegally selling in Canada. CONTRIBUTED

Included in the enforcement effort were the following stores: Bulacan Fashion; Bon-Bon; Waynes Collectibles; a store at 23 Glen Watford Drive in Dragon Centre; Universe Communication Ltd. in Oriental Centre; and a store located at 6057 Victoria Avenue in Montreal, Quebec.

“The stores were selling poor quality copies of ABS-CBN’s movies which tarnish our customers’ viewing experience and damage the ABS-CBN brand,” remarked ABS-CBN AVP and Head of Global Anti-Piracy Elisha Lawrence. “In addition, Canada is robbed of the taxes it deserves as these stores sell these DVDs for cash and pay no taxes to the government.  Everyone are losers if this isn’t stopped.”