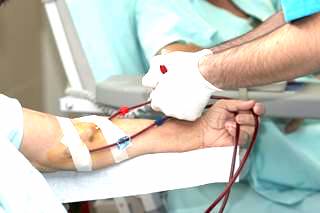 Dr. Susan Wong sat down with an 84-year-old patient in the hospital, where he’d been admitted with a flare-up of a serious autoimmune condition and deteriorating kidney function.

The older man told her he wanted to go home; he’d had a good life and was ready for its end. He didn’t want aggressive care — including dialysis — having witnessed his wife and son die painfully in intensive care years ago.

Wong, an assistant professor of nephrology at the University of Washington, was prepared to follow the man’s wishes, but other physicians, eager to pursue tests and treatments, disagreed. For a week, the doctors argued about what to do. Finally, they discharged the patient, who died in hospice care a few weeks later.

Older adults with advanced kidney disease who want to forgo dialysis often encounter similar resistance from physicians, according to a new study in JAMA Internal Medicineby Wong and colleagues at the Veterans Affairs Puget Sound Health Care System in Seattle, where she’s an investigator.

The researchers documented doctors’ reactions by reviewing medical charts of 851 older patients with chronic kidney disease who refused dialysis at the VA health system from 2000 to 2011. In their notes, physicians frequently speculated the patients were incompetent, depressed, suicidal or irrational.

With dialysis, people are hooked up to a machine that removes waste from their blood, usually three times a week for four hours at a stretch. Many older adults find the treatments burdensome, and medical complications are common.

Yet patients who expressed reservations about this treatment were sometimes labeled as difficult or unprepared to confront the reality of their medical condition. “Still in denial about his kidney disease and his need for hemodialysis in the near future — repeat discussions with patient and wife regarding compliance,” one nephrologist wrote. Even when patients were firm about declining dialysis, doctors repeatedly questioned their decisions.

“Clinical practice guidelines for advanced kidney disease are geared toward survival, not what would give patients the best quality of life or the greatest functional capacity,” Wong said. Another factor at play: Nephrologists aren’t trained to ask seriously ill patients what’s most important to them and shape treatment recommendations accordingly. Although most patients want to have such conversations with a kidney specialist, few do so, studieshave found.

“We don’t really know how to help patients with serious illness make decisions that are right for them or what to do when they don’t really want dialysis,” said Dr. Jane Schell, an assistant professor of palliative care and nephrology at the University of Pittsburgh.

Conversations about the potential benefits and burdens of dialysis, as well as alternatives, are especially important for frail patients 75 and older who have two or more chronic  conditions, such as diabetes and high blood pressure, and difficulty with daily activities such as bathing or walking — a group at risk of experiencing significant complications from dialysis but not achieving longer life.

Healthier older adults have better outcomes on dialysis — a valuable treatment for many people. “We shouldn’t limit access to dialysis based on age, but we should have meaningful conversations about goals of care and make it clear that dialysis is a choice and that patients have alternatives,” said Dr. Bjorg Thorsteinsdottir, an assistant professor of internal medicine and bioethics at the Mayo Clinic.

Options that should be discussed include comprehensive conservative care, which calls for preserving as much kidney function as possible, managing a patient’s health problems, dealing with symptoms such as nausea, swelling, itchiness, pain and breathing difficulties, and preparing for end-of-life care; peritoneal dialysis or hemodialysis at home; and palliative dialysis, a less intensive version of this treatment that keeps people alive for longer but isn’t meant to restore kidney function.

Comprehensive conservative care programs are few and far between (in New York City, Pittsburgh, Seattle, San Francisco and a few other locations), but efforts are underway to change that. With funding from the American Society of Nephrology, Schell and colleagues at the University of Pittsburgh have developed an online conservative care curriculum set to debut in March. Nineteen nephrology training programs for physicians are set to participate.

Also, the Pathways Project, funded by the Gordon and Betty Moore Foundation, is working to make palliative care (also known as supportive care) for patients with advanced kidney disease widely available. (KHN’s coverage of end-of-life and serious illness issues is also supported in part by the Gordon and Betty Moore Foundation.) Dr. Alvin Moss, co-investigator of the project and professor of medicine at West Virginia University School of Medicine, said the project hopes to sign up 10-15 dialysis centers this year.

Sometimes, patients choose a time-limited trial of dialysis with the understanding that they can change their minds down the road.

Cyndy Patton’s 86-year-old mother, Isabel, learned last spring she had advanced kidney disease after going to a Pittsburgh hospital, sickened by repeated bouts of vomiting. Physicians suggested she try dialysis for a few weeks and see if her kidneys might rejuvenate. (The older woman had survived open-heart surgery and a stroke and was living on her own after her husband’s death.)

After a week in the hospital and another week in a rehabilitation center, there was no change: Patton’s mother still needed dialysis. Five weeks later, she confessed to her daughter that the treatment was making her miserable. But giving it up felt like committing suicide, she told Patton — an unacceptable option.

A week later, Isabel had changed her mind. “This is not a life I care to lead, being hooked up to these machines,” she told Patton. “What am I doing this for?” The older woman had consulted with Schell at the University of Pittsburgh about palliative care and hospice care, and she chose hospice.

Dialysis ended and the family gathered at Isabel’s bedside. “She was all ready to die — but she didn’t, and is still living to this day,” Patton said.

It’s an example of how hard it can be to predict what will happen to any given patient with advanced kidney disease. What’s important for the patient to understand is that “it’s not always all or nothing — dialysis or death,” Thorsteinsdottir said.

“Patients have to be very assertive and tell their medical team: This is what I want and what I don’t want,” Moss said. For more information, he suggested people explore the websites of the Coalition for Supportive Care of Kidney Patients(he chairs that organization), the National Kidney Foundationand the American Association of Kidney Patients, and “really spend some time learning about your options.”