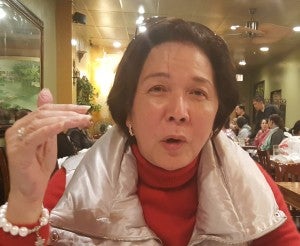 Longtime Alliance of Women for Action Towards Reform (AWARE) advocate Vicky Garchitorena was on a family visit in San Francisco when she expressed sadness that the extrajudicial killings (EJK) allegedly committed mostly by members of the Philippine National Police (PNP).

“I came to know that many policemen went to priests asking, ‘What can we do? We don’t want to kill but we have to make the quota or we may be out of our jobs. How can we feed our children?’” Garchitorena rued.

“Can you imagine the moral dilemma that they are under? Whatever they do, they lose. They lose their soul or they lose their jobs. They are in a lose-lose situation. The police who are supposed to protect the people are put in a situation where they are forced practically to kill people. They must be having a very hard time living with themselves.”

The eight-month old administration of Philippine President Rodrigo Duterte is being held responsible by both international and local human rights advocates for the summary killing of around 8,000 Filipinos suspected of involvement in illegal drugs. The accusation is mainly due to Duterte’s public pronouncements and presumed order to PNP Chief General Ronaldo “Bato” de la Rosa to kill addicts and pushers.

“For me, the worst sin of the Duterte administration is killing 8,000 Filipinos most of whom are poor, in shanties and slum areas, in tricycles, without due process and made them appear that all resisted and fought back. They (law enforcers) planted shabu and weapons. I am really against those summary killings,” Garchitorena said.

“What kind of a man is that? Even during the campaign he confessed that he had killed at least four people. You have a self-confessed murderer as a president. And he was saying that he was telling the police to kill all the drug lords. Most of them were not even drug lords but his enemies and detractors like broadcaster Jun Pala. And I hope Filipinos all over really think through, especially those who still believe in Duterte, on what is really happening in our country.”

On the last EDSA People Power commemoration, Garchitorena found it really weird that the government did not want to celebrate the event when it was something celebrated with great enthusiasm and anticipated by many in the past.

“There was even an EDSA People Power Commission supposed to oversee the celebration because those were our glorious moments when the people found their voice, their power against the dictator. So it is so disheartening that the government itself, President Duterte himself, was saying to forget the past and let us move on. Why should you forget the past? Our elders advised us not to forget the past lest we are bound to repeat it especially now that there seems to be someone wanting to be a dictator,” warned Garchitorena.

Garchitorena admitted that there were only 7,000 participants in their EDSA People Power anniversary celebration, a lot less than the estimated 20,000 (Manila police put it at 200,000) who came to the pro-Duterte rally in Luneta the same day.

“What was good was that even though there were only about 7,000 who came and went, they were on their own and not herded to attend unlike the parallel rally in Luneta where a Department of Interior and Local Government (DILG) memorandum from Secretary Ismael Sueño asked the mayors to send their own contingent. It again is a case of local government units being used by the government to bring in the crowd with the use of government vehicle and other resources. Even then, they did not make the one million crowd they wanted,” Garchitorena claimed.

Garchitorena also contended that there was a very clear attempt for the return of the Marcoses to power even during the presidential campaign because of the presence of many Duterte-Marcos posters all over the Philippines and not just in the Ilocos provinces, reportedly to the dismay of Duterte’s running mate, Alan Cayetano.

“When he went to China, President Duterte mentioned that Bongbong Marcos would be the new vice president (if he wins his electoral protest.) How can he brush aside Leni Robredo’s slim margin of victory? To me that was a rude act, with no decorum, and unbecoming of a president,” continued Garchitorena.

“Marcos’ Martial Law was such a dark period in our history and then you want the Marcoses to come back? They have not even given back the $10 billion they stole from the Filipino people. We are really against that comeback. And yet the President is pushing it all the time.”

She also noted that there are attempts from some quarters towards historical revisionism, chiefly through social media posts claiming that Marcos was the best Philippine president ever, etc.

“I am tempted to ask whether they were daydreaming. Have they forgotten what happened during the Marcos years when our peso collapsed, our economy was really in tatters? Marcos cronies had taken over businesses,” she recalled.

Garchitorena reported that many non-governmental organizations (NGOs) are going around the country speaking to students in colleges and universities using new experiential methods like bringing actual victims of Martial Law to talk how they were tortured, sexually abused, how they suffered disappearances, illegal detentions and summary killings. Besides, books are coming out to instruct and remind the youth what really happened under Marcos.

“We were also surprised when the millennials came out to protest in full force when Marcos was buried at the Libingan ng mga Bayani. So obviously, they have heard from their parents and even grandparents about the Martial Law regime and they were thought at least in the Catholic schools,” Garchitorena said.

Garchirotena just laughed off reports of attempts to “destabilize” the Duterte administration, saying the administration was just using them to repeatedly remind the public that Martial Law could be declared, a revolutionary government or a dictatorship put up in case that happens.

“I have not heard of anyone wanting or planning to destabilize Duterte. We may be against many of the things he is doing, but we are not out to oust him.”