Babel is alive and well …

NEW YORK—The American Civil Liberties Union just recently filed suit against the U.S. Customs and Border Protection (CBP) agency, on behalf of two U.S. citizens, Ana Suda and Mimi Hernandez. Last year, the women, of Hispanic descent, were stopped by an agent after he overheard them speaking Spanish in Havre, a small town in Montana about 35 miles from the Canadian border. The pair had stopped at a convenience store to buy eggs and milk around midnight.

The CBP agents have broad authority when operating within 100 miles of a U.S. border. They can set up checkpoints, they can question people in their vehicles about their citizenship. However, the agency’s policy, its legal mandate, prohibits its personnel from stopping or detaining someone solely on grounds of race or ethnicity. The women and the ACLU allege that this is what occurred in Havre, that simply on the basis of language, the two were being racially profiled.

The agent explained that it was unusual to hear Spanish being spoken in that small town. What was clearly implied was that to be “American” one has to be conversant only in the English language, at least in public. It’s as though to speak any other language were tantamount to a betrayal of American values, even treason. Then again, if the women had been speaking German or Dutch, would they have been questioned? Highly unlikely.

Given the hateful rhetoric, particularly about Mexicans, being thrown around by President Less Than Zero, this disdain for being bilingual, much less multilingual, is not at all surprising. It’s a retrogressive desire to return to the good ole days, pre-civil rights, when multiculturalism was a strange concept and people of color knew their place and stayed there. 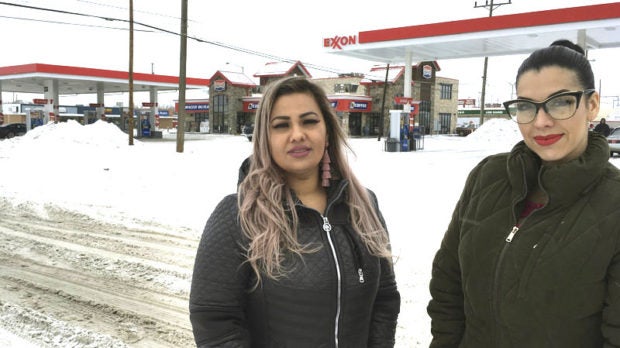 Mimi Hernandez (left) and Ana Suda say they were interrupted and detained because they spoke Spanish while shopping at a convenience store in Havre, Montana. They’ve now filed a lawsuit. AP PHOTO

The harassment of the two women reminded me of a similar incident, though far less serious, in the mid-‘70s, when I had begun working in the classified advertising department at The Village Voice, the now sadly defunct alternative New York weekly. The fellow handling the phone calls coming in from prospective advertisers was Sammy, a completely bilingual Puerto Rican. When the pace of work was slow I’d practice my Spanish with Sammy, glad that I could put to use all those years of being obliged to study Spanish in school, which at the time my peers and I considered irrelevant to our lives.

That Sammy and I would chit-chat in Spanish didn’t sit well with the department manager, supposedly a liberal New Yorker who “asked” us to refrain from speaking another language while at work. At the time, I had no clue as to whether Sammy and I had the right to speak to each other in any language we chose, and I was fearful of being fired. Sammy felt the same way. And so it was that we complied.

That also reminded me of my time as a student at the Ateneo de Manila, when speaking Tagalog on campus was verboten. Tagalog was not even considered a language as it was classified merely as a “dialect.”

The English-only rulebook was a holdover from the American colonial period, meant, I suppose, to solidify our status as little brown brothers to the bigger white brothers. In fact, the implied fraternity was a fiction.

While it may seem that English has become a global tongue, in truth, 75% of the world does not speak it.  Here in the U.S., the percentage of students studying another language is just 20%. In contrast, 90% of students in the European Union speak not only their mother tongue, but study at least one, and often two, foreign tongues, one usually being English. Hence, traveling in Europe nowadays rarely presents problems for those who only speak English.

I currently teach Filipino to students at New York University, most of whom are Filipino-Americans, which means either they were born here, or were brought over by their parents when they were either toddlers or kids. Those who were kids did speak Filipino but faced pressure to be monolingual upon arrival on these shores. The pressure was not just from the larger society but even more so from their parents—not at all surprising, given the legacy of American imperialism.

Language is often a field where power relations are put on display. In today’s parlance, it can be weaponized. To have your own language turned against you is a terrible thing. It is a violation of a precious human right, the right to free speech, anyspeech from anyculture.

New York is a tough city, a city of many flaws, but one of its greatest strengths is that it is a mecca of languages. It’s a Babel that works.