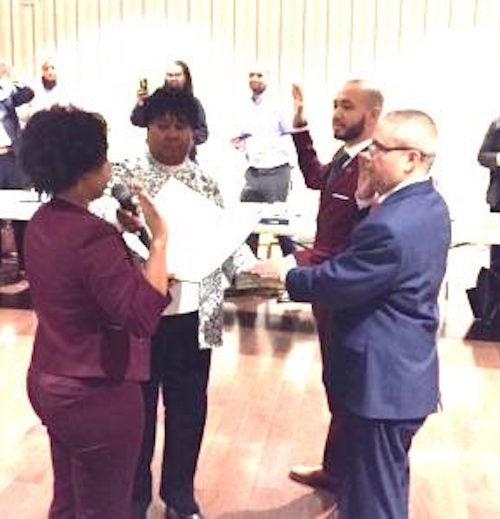 Ernest Canlas (right) takes the oath of office during a swearing in ceremony on Feb. 19.

Central Committee members set local party policy and assist local candidates and choose representatives to the state central committee. In Maryland, party central committees fill vacancies in state and local offices when a member of the party resigns or dies in office.

“The overall goal of the DCC is to strengthen the Democratic Party as a whole,” Canlas adds. “We are now preparing for the 2020 elections and working towards getting good Democrats elected into office.” The DCC requires an equal number of males and females to serve. As it happened, the 28-member DCC was two males short after the June primary.

Canlas, along with another Democrat, went for the opening as “Gender Balance” candidates.

The 53-year-old Canlas campaigned for a seat in the DCC during the June primary elections. He knocked on doors, registered voters and spent his personal money on campaign signs and materials. Although he did not prevail, but he did not quit. He kept serving and supporting other candidates.

“I campaigned so hard in June and I did not want to waste all that hard work,” Canlas says. “So, this time, I went for the appointment opening.”

Running in the June primary elections was his first try for elective office.

Canlas is a member of the Prince George County Public School PTSA since 1995 when his eldest child began school.  He currently serves as President of the Mt. Airy Estates Home Owners Association (HOA), of which he was a participant and board member since 1999.

He is also serving as Secretary of the Prince George’s County Police Department (PGPD) District V Citizens Advisory Council since 2016. His platform includes Term Limits, fully elected Board of Education, and Accountability of Elected Officials.

Tara Maxwell, a colleague in the Democratic Party, praises Canlas  as a “Servant Leader,” and for his “deep commitment to the Prince George’s County community and its residents.”