“Juan Luna,” a pen name that pays homage to the remarkable Filipino painter and 19th-century political activist, is a courageous blogger from the South.  He recently wrote about an extrajudicial killing victim and uploaded a viral video.  For this, Juan Luna’s website was bombarded by overseas trolls.

The video clip is tough to watch. Someone’s smart phone captured the dying minutes of a helpless young Filipino, writhing on a hospital gurney, exsanguinating from multiple gunshot wounds, pleading for the doctors and nurses to help him. It is sickening and heartbreaking to watch medical professionals standing by, giggling and cracking jokes, vis-à-vis human agony. You hear someone saying she will have to wash her clothes (presumably after this bloody encounter). 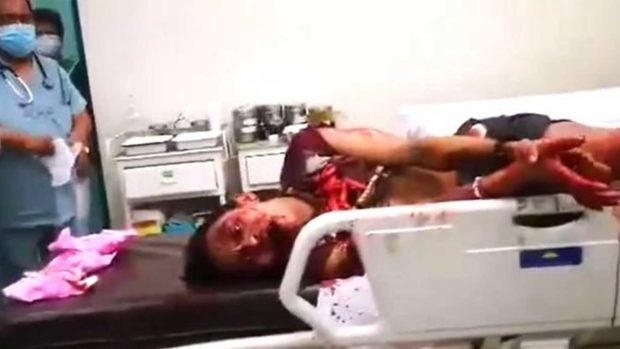 Instead of starting standard IV fluid resuscitation, checking his airway, examining his wounds and applying pressure to stop the bleeding, monitoring vital signs and preparing the patient for emergency surgery, you hear hospital personnel blaming the patient instead: “You should not have resisted arrest.”

And you watch hospital security guards warning the patient not to move. And you notice a man in scrubs (presumably a physician) with a useless stethoscope hanging around his neck, observing from a distance instead of attending to the patient or summoning for more help.

The 23-year-old Filipino had apparently been accosted by police in Tuburan, Cebu, for possession of drugs. Other reports indicate that he was merely an innocent bystander.  The police claim that Jimbe Casas resisted arrest and was thus shot in the face, chest, and extremities — which has now become the standard narrative for such summary killings.

The video is also shocking in its implications. A culture of violence and death, triggered by President Rodrigo Duterte’s all out drug war and his persistent depiction of drug users as scum of the earth, has patently metastasized. This impunity and disregard for basic human rights have infected the core values of the now trigger-happy national police. It has apparently transformed compassionate medical and nursing professionals into apathetic bystanders.

Duterte’s drug war has numbed the conscience of a nation. It has turned hearts into stone.

Where is the pushback? Where is the national outrage against state-sanctioned extrajudicial killings, now estimated to have mowed down 30,000 and wreaking lasting havoc on the lives of predominantly poor families in slum areas and baranggays?

The Filipino nation has either been cowed into fear and submission or has simply bought into Duterte’s simplistic doctrine that the only way of dealing with people involved in drugs is to kill them.

Even the Philippine clergy, whom the people look up to for moral guidance and leadership, has failed to step up to the plate promptly. Yes, the Catholic Bishops’ Conference of the Philippines finally came up with a pastoral statement on 28 January 2019, decrying the state of affairs, calling out the brutal murders of “small-time drug users and peddlers while the big-time smugglers and drug lords (are) scot-free,” advocating for children not to be regarded and incarcerated as common criminals.

The bishops are finally standing up in unison, pleading that the government and the country’s leaders be more compassionate in helping “the poor, the weak, the disadvantaged, the elderly, the children, those with special needs and all those who tend to be left out in society.”

But why wait until the ship is halfway submerged in water?

MORE STORIES
Old Country Coffee Announces New Coffee Shop Promotion to Celebrate Customers for May
Monkeypox: Should the world be concerned?
Trump refused in Georgia as Republicans reject his handpicked challengers
Don't miss out on the latest news and information.

MOST READ
usa Monkeypox: Should the world be concerned?
usa Fil-Am graduates with 7 trade certificates from San Diego college
usa Top 10 Richest Companies in the World as of 2022
usa The latest on the tragic Texas school shooting that left 19 children, 2 adults dead
usa Trump refused in Georgia as Republicans reject his handpicked challengers
usa California to pay college students for community service
usa Cryptoverse: Is Bitcoin’s winter ending near
DID YOU KNOW?
A Beginner’s Guide to Buying a Vacuum Cleaner in 2022
Island Hopping in Tulum: The 12 Best All-Inclusive Tulum Resorts
How to Dispute a Debt and Win | Simple Tactics
The 12 Best Lat Exercises for Muscle Growth
Countdown to summer: tips for learning how to surf
User Guide: How to Track a Lost iPhone