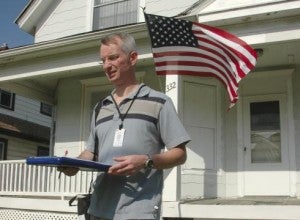 A Census enumerator at work in 2010. White House would have them ask respondents about their immigration status in 2020 Census. ASSOCIATED PRESS

A draft executive order currently under consideration by the White House would – for the first time – mandate census workers to ask respondents about their immigration status.

The mandate is embedded in a section of the Jan. 23 proposed order: “Protecting American Jobs and Workers by Strengthening the Integrity of Foreign Worker Visa Programs.” India-West previously reported on the draft order, which aims to reform H-1B, L-1, and OPT programs.

The proposed order mandates that the Census Bureau, in collaboration with the State Department, Commerce Department, Labor Department and Homeland Security, publish a report each year illustrating immigration patterns, and the size of the foreign-born population in the U.S.

The report must also include the fiscal impact of foreign temporary workers on wages and employment of U.S-born workers.

The order explicitly states that the census questionnaire must include questions on immigration status and whether the respondent is a U.S. citizen.

The Brennan Center for Justice notes that the proposed order has “fueled concerns among advocates about an undercount if the nation’s immigrant communities – fearful that the information may be used against them or family members – decide not to participate in the census.”

The impact of an undercount could be especially ominous for fast-growing states like Texas and California, which house large numbers of undocumented immigrants, noted the Brennan Center, adding that an undercount could result in inadequate federal resources to those states, and disproportionate representation in Congress.

“By crossing a long understood line about the professional independence and integrity of the Bureau, President Trump would interfere with collection of an accurate Census count in 2020 and impair public trust, local economies, and fair redistricting,” noted the Brennan Center.