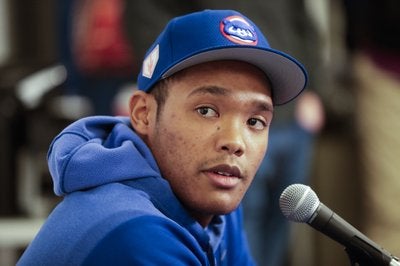 “My past behaviors were wrong and unacceptable,” he said.

Russell, a Filipino American, met with the media Friday for the first time since being suspended last fall, a penalty that he accepted without appeal.

The suspension followed allegations made by ex-wife Melisa Reidy. Russell missed the final 11 regular-season games plus a wild-card playoff loss to Colorado. He will be eligible to return in early May, barring postponements.

“I don’t want to get into any specifics, but what I do want to say is I am accountable for my past actions,” Russell said. “I’m not proud of the person I was, but I do want to own this issue and take responsibility for the hurt and the pain that I’ve caused Melisa, and for that I am sorry.”

The 25-year-old Russell said preparing for this public appearance was difficult, yet also a long time coming for him to “have a voice finally and to speak on what I have been thinking.”

“My preparation for this press conference, it’s been tough. I haven’t ever had to face the media like this before,” he said.

“I want to own my actions. I want to be accountable for the hurt that I put Melisa through and the pain that she went through. That’s what I want to own,” he said. ”… I’ve had time to reflect. Through counseling I have a better understanding what domestic abuse really is. And I am committed to my work right now, that’ my main focus, and already I see the benefits that come within that with my family and with my children.”

Asked what specifically he learned about the definition of domestic abuse, Russell noted, “it includes feeling like you’re the only person on an island, feeling isolated, but also disrespected by someone who cares about you.”

The Cubs considered Russell’s news conference a significant first step in the process for his possible return this season. Manager Joe Maddon and president of baseball operations Theo Epstein attended the session.

“If he continues to do what he’s doing right now obviously everything’s headed in the right direction,” said Maddon, who communicated regularly with Russell via text message during the offseason. “Within the group itself, a lot of it’s going to depend on him and his interaction with the group and how the boys react to him. And a lot of that’s going to come through conversation and interaction. … We’re still early in the ballgame right now. We’re trying to work our way through it and everybody knows that, and of course Addison knows it more than anybody. Be patiently working through this and see where it concludes and keep an open mind with him obviously and try to be supportive.”

The Cubs said they will hold a couple of domestic violence training sessions, one mandated by MLB and another more enhanced meeting.

On Tuesday, Epstein said he is in regular contact with Russell, who knows “he has been given a conditional second chance by this organization” and will be held to “an incredibly high standard.”

The former first-round draft pick by Oakland was disciplined after Reidy published a blog post in September describing years of physical and emotional abuse.

Maddon will be available to Russell as a listener and asked angry, critical fans to perhaps consider the idea of giving someone a second chance as a human first, with baseball coming second.

Russell said he is working with a counselor, speaking as recently as Thursday. He noted the support of his family and the team for sensing he is “determined” and “committed” to being a better person.

Russell realizes that if and when he does return to Chicago’s lineup, he will face scrutiny both at home and in road ballparks.

“I am learning how to cope with my feelings and emotions to handle adversity whenever I face them,” he said.