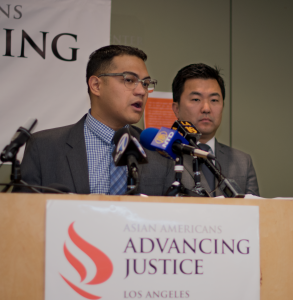 AAAJ-LA attorney Christopher Lapinig discusses the implications of Trump Administration’s executive orders on immigration and what community members can do to assert their rights during a press conference hosted by the nonprofit on Thursday, March 9. INQUIRER/Eric Licas

LOS ANGELES–The US Constitution protects any person questioned by Immigration and Customs Enforcement (ICE) agents from divulging information that might lead to their deportation, stated immigrant rights advocates in the face of a nationwide crackdown targeting undocumented immigrants.

“What we saw during the February raids and sweeps is that ICE is departing from its practices under the Obama administration,” AAAJ-LA attorney Christopher Lapinig told the INQUIRER.net. “Despite whatever [ICE] says, they’ve increasingly begun to engage in collateral arrests.”

Representatives from the Department of Homeland Security (DHS) maintain that agents are focused on removing dangerous criminals from the country.

However, Lapinig and other sources report that many undocumented but otherwise law-abiding members of the community are getting caught up in what DHS spokesperson Gillian Christensen referred to as “routine” enforcement actions in February. 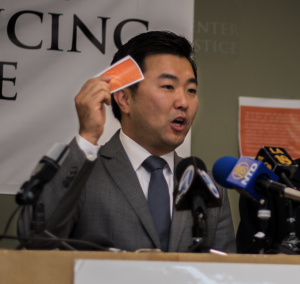 “[ICE] will, generally, seek out individuals with more serious criminal convictions, but the people who get detained and arrested often don’t have any criminal history, or will have minor offenses,” AAJ-LA attorney Martha Ruch said.

She and other speakers at Thursday’s conference reminded members of immigrant communities that law enforcement agents need a warrant in order to either search private property and individuals, or take a person into custody.

Any information collected by ICE officers during an enforcement sweep can be used by trial attorneys for the federal government to build a case for removal.

“If an ICE agent approaches you and starts asking you questions, the most important thing is to understand that you don’t actually have to answer them,” Ruch said.

Regardless of their immigration status, people held during an ICE raid have the right to remain silent, and are not obligated to produce any documentation or otherwise comply with orders that might identify them as undocumented.

Law enforcement officers, on the other hand, should divulge the reason they are detaining someone and whether or not they are ICE agents if asked.

“It’s going to be very important for everybody in our communities to know their rights so they can stay as protected as possible,” AAAJ-LA Executive Director Stewart Kwoh said during Thursday’s briefing.

The nonprofit is in the process of training community organizations to provide outreach and support for people who are facing removal from the U.S., or just have questions about what to do if they are stopped by ICE. They can find answers in a number of languages from the AAAJ-LA immigration hotline, 888-349-9695, or at their website, www.advancingjust-la.org.