A Nun’s Story: ‘The violence of hypocrisy’ 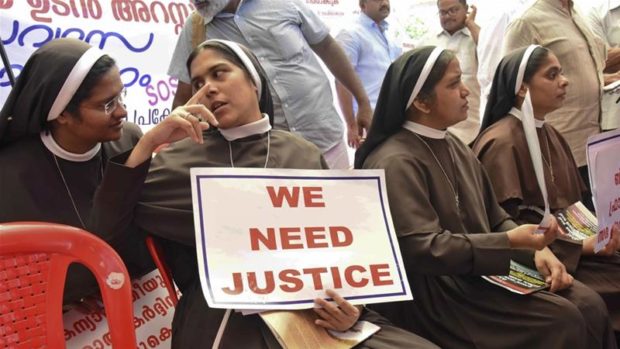 Indian nuns demonstrating against Bishop Franco Mulakkal, who has been accused of raping a nun. AP PHOTO

NEW YORK—The #MeToo movement continues to have repercussions beyond this country. Pope Francis recently acknowledged that sexual abuse of nuns by clerics, including bishops, has been a long-time problem within the Catholic Church. The papal announcement has broadened the scope of scandalous clerical behavior being investigated.

No longer is it simply the molestation of children and young men by priests, but also, now, the violation of the veil and the vow of chastity that women profess when they enter the nunnery. The pontiff admitted to reporters that the problem lay in “seeing women as second class.” (The pontiff might consider lifting the prohibition on women becoming priests.)

In the Vatican’s official newspaper, the Osservatore Romano, the journalist Lucetta Scaraffia wrote that “if we continue to close our eyes in front of this scandal—made even more serious by the fact that abuse of women includes procreation and so imposed abortions and children not recognized by priests—the condition of oppression of women in the church will never change.”

According to the BBC, the Community of St Jean, a female congregation in France, was dissolved in 2005 by Pope Benedict, for its superiors allowed some priests to behave “in ways that went against chastity” with several women in the order, according to the French Roman Catholic newspaper La Croix.

In India last year, the diocesan head in Jalandhar in the Punjab, Bishop Franco Mulakkal, was taken into custody, having been accused by a nun of raping her 13 times between 2014 and 2016. The bishop has denied the accusations.

Allegations of sexual abuse of nuns have so far also surfaced in Chile, Italy, and in Africa. In certain instances, disciplinary action was taken not against the alleged assailants, but against the women who had the temerity to report the assaults.

The most infamous case of a nun’s sexual abuse by a priest in the Philippines is fictional. In the concluding sections of Rizal’s Noli Me Tangere, from the Augenbraum translation, we learn of the sad fate of Maria Clara. Knowing that a marital union with the love of her life, Crisostomo Ibarra, is out of the question—he’s a fugitive from the Spanish authorities—rather than agreeing to a loveless marriage arranged by Padre Damaso, she gives him an ultimatum: “The convent or death!”

The friar warns her that she has no idea of what goes on in a cloister, that in the outside world, “your complaints are heard, there, there are only the walls … you are beautiful, very beautiful, you were not born for that, a bride of Christ!”

The worldly friar knows of what he speaks.

One day, a representative of the government visits the Convent of Sta. Clara—to which order Maria Clara belongs—and asks to “speak to the abbess and see all the nuns.

“They say that one appeared with her habit soaking wet, all in tatters, and asked for the man’s protection against the violence of hypocrisy, making accusations of many horrors. They say as well that she is very beautiful, that she had the most gorgeous and expressive eyes one had ever seen.”

The implication is clear: the beautiful Maria Clara has been sexually abused. The further implication is that the rapist is the priest and spiritual adviser who visits the cloister regularly. (Those who have read the novel will know his identity.)  But the functionary does nothing, apparently convinced by the abbess that the beautiful nun is mad. Later, upon hearing of this incident, the superior of the Jesuits—the order to which Rizal was close—decides to protect her. However, when he visits the cloister, he is refused entry by the abbess, who cites “the name of religion and the holy statutes.

“No one spoke of the incident again, nor of the unfortunate Maria Clara.”

Rizal’s incendiary exposes of their hypocrisy and greed enraged the friars—the main target of the novelist’s critiques—and they bayed for his blood and got it.

Will similar allegations surface in the Philippines?

We will have to wait and see, but human frailty being what it is, I would not in the least bit be surprised should credible stories of another Maria Claras surface.