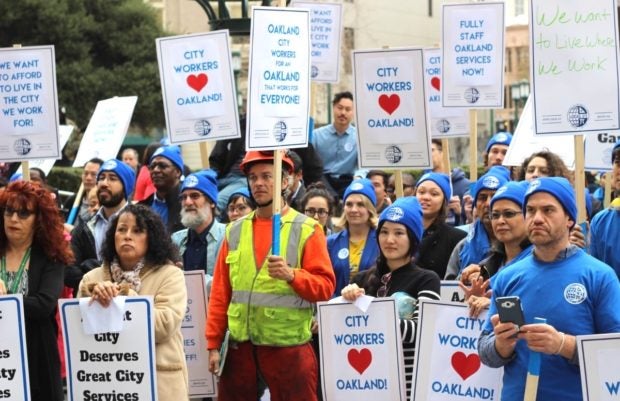 Oakland City workers, look determined as they hold aloft the placards stating their demands, as they kicked off collective bargaining for a new contract with City Hall. INQUIRER/Jun Nucum

OAKLAND, California — More than a hundred Oakland City Hall employees, union officials, members and supporters kicked off contract talks with the city government with a rally on City Hall steps on Jan. 31.

The collective bargaining between Oakland city government and 1,000 city employees has begun as the current agreement is due to expire in June this year.

Chanting that they got union power and they want the contract now, Oakland City workers held up placards demanding a better contract, and listened to the speeches by guests and International Federation of Professional and Technical Engineers (IFPTE) Local 21 union leaders and sympathizers. 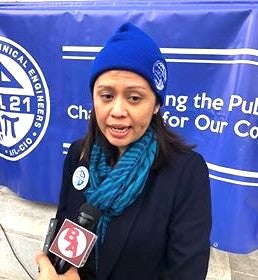 Councilmember Bas assured the workers that she was is grateful for the workers’ dedication and hard work “for our city to keep it running and now as a councilmember for a month, I have a deeper appreciation for the value that you have for our city.”

“It is clearer to me now, that if we are going to grow with the city, if we are going to continue protecting our working middle class and diversity, we must ensure that we invest in all of you our city workers. You are the ones who make our city run, serve our residents and our businesses,” Bas told the crowd. 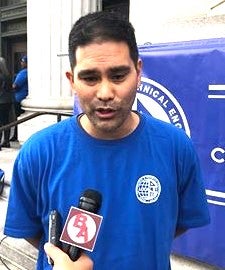 Rally emcee and member of the 2019 bargaining team, Filipino American Tony Daquipa, Jr., says Oakland wins “when people that serve the community are in a better position to succeed in doing their jobs.” INQUIRER/Jun Nucum

“We all know that there is a real threat of inequality, of displacement. And you feel the rising rent, the housing crises, and you may not be able to live in the city that you are serving,” she added.

Bas noted that despite economic recovery, city workers are not just struggling to keep up, but are also falling behind their colleagues in neighboring cities.

“So, we all have to stand together as a city. We have to lead together, we have to lead with our values that prioritize equity and that invest in our workers because that means we can also invest in our residents and businesses,” urged Bas. “I will urge my colleagues here in city hall, the mayor the administration to reach a fair agreement that recognizes the vital role you all play to keep our city running.” 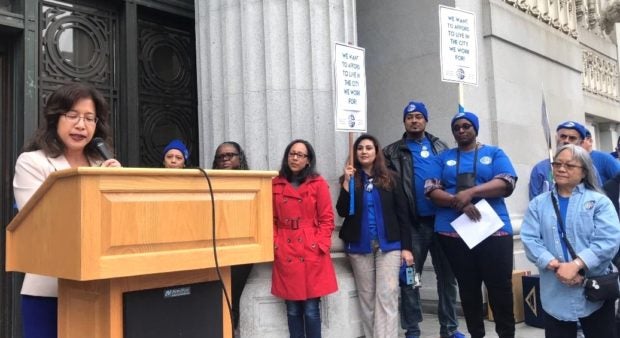 Filipino American Tony Daquipa Jr., Local 21 union political coordinator and member of the 2019 bargaining team, explained that the rally was for flexing worker power as they start to fight for a fair contract this week.

“In having this rally, we are showing that we are united and that we are willing to fight for fair contract,” explained, Daquipa, whose parents hail from Panglao in Bohol.

Daquipa added:“We still chose to work for Oakland despite being underpaid because we love Oakland and that is what really this is all about. Our concerns are primarily working conditions. The city is leaving some positions vacant filling those positions with temporary workers that may not be the best people to serve the Oakland community.”

Local 21 field director Fil Am Katherine General echoed Daquipa: “You can’t put community services first if you put city workers last.  Today we are not just expressing our love for Oakland, but also our commitment and collective power to fight for a better Oakland. We have to continue to demonstrate our unity and power.”

General told INQUIRER.net that that the people who work in Oakland are her “pinsans, titas, titos, lolos and lolas.”

“We are proud to have Nikki (Fortunato-Bas) and Sheng (Thao) the two council members that spoke today, with us in this fight. It is really important to have strong women leaders and women of color of Oakland who understand the struggle of working people and who are representing us in this city.”