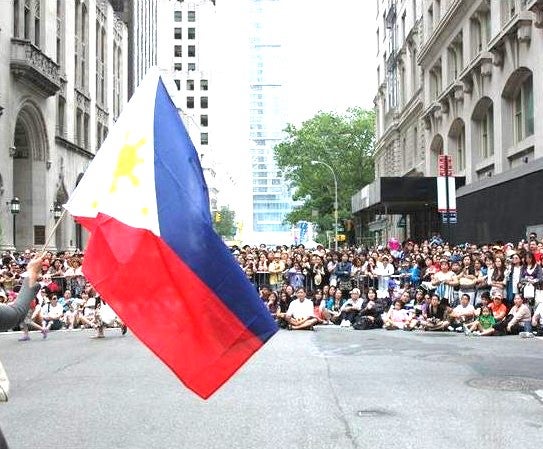 Filipinos at a June 12 Independence Day celebration. THE FILAM

Relative to all residents, Filipinos in New York City were more likely to be: 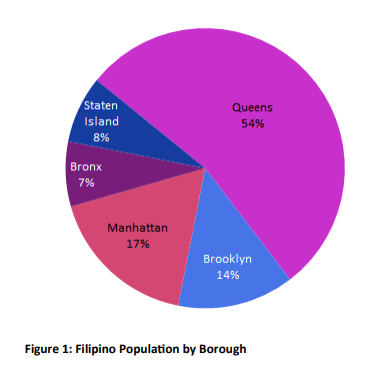 New York City was home to 60 percent of New York State’s Filipino residents. The majority (54 percent) of Filipino New Yorkers lived in Queens. The remainder lived mostly in Manhattan and Brooklyn. The share of Filipino population among the five boroughs did not appreciably change from 2010 to 2015. The neighborhoods with the largest Filipino populations include Woodside, Elmhurst, Fresh Meadows, Jamaica Estates, and Queens Village in Queens Borough. In 2015, working-age adults (age 18 to 64) were a larger share of New York City’s Filipino population, comprising 69 percent, compared with 66 percent of all city residents. Children (under 18 years of age) and seniors (age 65 or older) each constituted 18 and 13 percent of the city’s Filipino population, compared with 21 percent and 13 percent, respectively, of the citywide population in those age groups.

Filipinos in 2015 had more schooling than the city’s general population. Of the city’s 63,266 Filipino adults, only 5 percent had not graduated from high school, significantly lower than 20 percent of all adults citywide.2 Also, 3 percent of Filipino adults in New York City had less than a ninth-grade education – a third of the 10 percent rate for all adult New Yorkers.

New York City’s Filipino residents had a lower incidence of limited English proficiency (LEP) than New Yorkers as a whole in 2015.3 Less than two-fifths (18 percent) of the city’s Filipinos spoke English “well,” “not well” or “not at all” – less than the 23 percent rate for New Yorkers overall (Figure 2). Filipino seniors had LEP rates that matched the overall senior LEP rate for the city Filipino New Yorkers had higher incomes compared to New York City residents overall for all income gauges.4 The Filipino median household income was $86,935, greater than the $53,373 median for the entire city population. Median family income was $95,881 for Filipinos, higher than the city’s median family income of $59,285. Additionally, Filipino per capita income was $38,179 – above the per capita income of $33,078 citywide.

One in ten (9.7 percent) of Filipino children in New York City experienced poverty, compared with 29.5 percent of all city children. Also, 8.5 percent of working-age Filipino adults and 12.3 percent of elderly Filipinos in the city lived in poverty, lower than 18.1 percent and 18.8 percent, respectively, for residents city-wide in those age groups.

For more information regarding this profile, contact the Asian American Federation Census Information Center at (212) 344-5878 x219 or [email protected], or visit www.aafny.org/cic/.