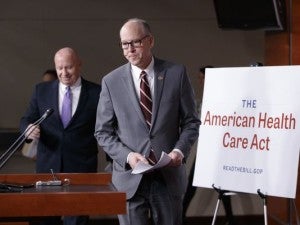 After literally years of promises, House Republicans finally have a bill they say will “repeal and replace” the Affordable Care Act.

Some conservative Republicans have derided the new proposal — the American Health Care Act — calling it “Obamacare Lite.”  It keeps intact some of the more popular features of the ACA, such as allowing adult children to stay on their parents’ health plans to age 26 and, at least in theory, ensuring that people with preexisting conditions will still have access to insurance.

In some cases the elements of the law that remain are due to political popularity. In others, it’s because the special budget rules Congress is using — so Republicans can avoid a Senate filibuster — do not allow them to repeal the entire law.

But there are some major changes in how people would choose and pay for health care and insurance. Here are some of the biggest:

Both the GOP bill and the ACA provide tax credits to help some people pay their premiums if they don’t get insurance through work or government programs. And in both, the credits are refundable (meaning people who owe no taxes still get the money) and advanceable (so people don’t have to wait until they file their taxes to get them). But the GOP’s tax credits would work very differently from those already in place.

Under current law, the amount of the credit is tied to a person’s income (the less you earn the more you get) and the cost of insurance where you live.

The GOP tax credits would be tied largely to age, with older people getting twice as much ($4,000 per year) as younger people ($2,000). But the Republican plan would also let insurers charge those older adults five times as much as younger adults, so even a credit twice as big might not make up the difference in the new, higher premiums.

The GOP credits also do not vary by location, so they would be worth more in places where health care and health insurance is less expensive.

The GOP credits do phase out gradually, starting with incomes above $75,000 for an individual and $150,000 for families.

The biggest changes the Republican bill would make are to the Medicaid program. Starting in 2020, it would roll back federal funding for the ACA’s expansion that allowed states — if they so chose — to provide Medicaid coverage to all low-income individuals under 138 percent of the poverty level, rather than just the specific categories of poor people (children, pregnant women, elderly, disabled) who were previously eligible. Thirty-one states opted to pursue this ACA provision.

People who are covered under the expansion would continue to be funded by the federal government after that, but states would no longer be allowed to enroll anyone under those expanded criteria. And an enrollee who loses eligibility for the expansion program could not re-enroll.

But the bill would go further as well, making changes to the underlying Medicaid program that House Energy and Commerce Committee Chairman Greg Walden (R-Ore.) described as “the biggest entitlement reform in the last 20 years.”

Currently, Medicaid costs are shared between states and the federal government, but the funding is open-ended, so the federal government pays its percentage of whatever states spend. Under the proposed bill, the amount of federal funding would be capped on a per-person basis, so funding would go up as more people qualify. But that per-capita amount might not grow as fast as Medicaid costs, which could leave states on the hook for an ever-increasing share of the costs of the program.

“Capping federal contributions to the Medicaid program will likely force states with already tight budgets to limit eligibility and cut benefits to at-risk Americans,” said the American Public Health Association in a statement.

Help for the wealthy

If you earn a lot of money, or even just enough to put aside something extra for health expenses, the GOP bill will provide a lot to like.

First, it would repeal almost all of the taxes that were increased by the ACA to pay for the expansion of health coverage. Those include higher Medicare taxes for high-income earners, a tax on investment income, and various taxes on health care providers, including insurance companies, makers of medical devices and even tanning salons.

The bill would also provide new tax advantages for those who can afford to save — including allowing more money to be deposited into health savings accounts, and lower penalties for those who use those accounts to pay for non-medical needs.

In addition, the plan would lower the threshold for deducting medical expenses on income taxes and allow people with job-based tax-preferred “flexible spending accounts” to put away more pretax money. It would also restore over-the-counter drugs as eligible for reimbursement from those accounts.

The GOP plan doesn’t actually repeal either the requirement for individuals to have coverage or for employers to provide it. That’s because it can’t under budget rules. Instead, the bill would reduce the penalties in both cases to zero, rendering the requirements moot.

The individual requirement was used by the health law to force healthy people into buying coverage to help improve insurers’ risk pools since they could no longer bar customers with preexisting conditions. Instead of the requirement that most people obtain health insurance or pay a penalty, the Republican plan would provide a penalty for those who do not maintain “continuous coverage.” Those with a break in insurance coverage of more than 63 days could still purchase insurance without regard to preexisting health conditions, but they would be required to pay premiums that are 30 percent higher for 12 months.

The employer “mandate,” which requires firms with 50 or more workers to offer coverage or pay a fine, has actually had relatively little impact on insurance coverage, analysts have concluded, and probably is not necessary to prevent employers from dropping coverage. In both the ACA and the GOP bill, however, workers whose employers offer coverage could not decline that coverage and get a tax credit instead.

How to pay for it

With all the taxes and fees stripped from the ACA, how will Republicans pay for their tax credits? The answer is not clear yet.

“We are still discussing details, but we are committed to repealing Obamacare and replacing it with fiscally responsible policies that restore the free market and protect taxpayers,” said the Republican fact sheet that accompanied the release of the bill.

Also still missing is an estimate from the Congressional Budget Office that will detail not only how much the proposal will cost, but also how many people would gain or lose health insurance. Republicans insist that estimate will be available before the full House votes on the bill.