RED DEER, Alberta – The small window of opportunity by which hopefuls could start sponsoring their parents and grandparents irked applicants across Canada.

Immigration, Refugees and Citizenship Canada (IRCC) opened its “interest to sponsor” form online Monday, Jan. 28 at 10 in the morning Mountain Standard Time, and immediately closed after only a few minutes, with some applicants claiming the online form did not even show up on their screen.

The department was quick to dismiss the claim, stating that their internal assessment of the process revealed that steps were followed to ensure smooth and secure process for applicants.

FEATURED STORIES
Ex-aide of Imelda Marcos is New York’s No. 2 tax cheat
US immigration 2020 – what’s in store for Filipinos, other immigrants
Get Rid Of a Hickey In 90 Minutes

Novemmy Flores, 32, had tried last year to sponsor her mother-in-law, but was not picked during the government’s random selection process. She had hoped that this year would be the time following changes to a first-come-first served basis.

When the new year started, Flores learned that the government sponsorship program will open January 28 through the government’s Facebook page. 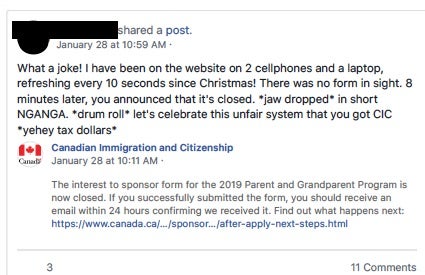 A posted complaint about the inaccessibility of parent sponsorship form on Canada Immigration and Citizenship’s website.

“I had everything ready because we really wanted my mother-in-law to come here as she is the only family we have left in the Philippines,” Flores said.

Another option, applying for a “super visa”–where parents could stay for as long as two years in Canada – was a less attractive option for her as it requires health insurance to cover potential health expenses.

“I was ready at 0930 when it opened. I kept refreshing the page every ten seconds, no form came up until the page said it had closed after only eight minutes,” she said.

She knows of others who either had a similar experience, or the system said it had closed when they proceeded to submit the form.

“You just wish it would be fair for everyone, at least having access to the form,” she added.

IRCC maintained it did extensive testing to ensure its systems were able to handle the volume. To ensure that submissions received were legitimate, the department also implemented anti-bot features, said Mathieu Genest, IRCC spokesman.

Genest released a statement saying the department’s initial analysis indicated there were no technical issues when the form opened online. The maximum number of submissions of 27,000 has been reached for 2019.

“We understand that those who were not able to make a submission are disappointed. We can confirm over 100,000 individuals attempted to access the interest to sponsor form,” said Genest.

IRCC tried to increase the number of sponsorhips through the Parents and Grandparents Program from 5,000 to 20,000 this year. The program allows Canadian citizens and permanent residents to sponsor their parents or grandparents to gain immigrant status in Canada.

Genest noted that the program has always been “popular.” “We inherited a backlog of over 167,000 cases under the previous government. We have worked hard to reduce this backlog down to under 25,000 while cutting the processing time to 20 to 24 months from the previous time of 7 to 8 years,” he said.

Instead of the first-come-first-served approach, IRCC in 2017 implemented a random selection process where it picked out 10,000 applicants who were invited to complete their applications.

Genest said the change this year was a result of a massive consultation from stakeholders, to ensure fairness while maintaining safeguards to ensure the system will not abused.

The department is encouraging unsuccessful applicants to look at other options to bring their family members to Canada, such as the super visa which allows a stay in Canada for up to two years at a time.

An online petition on change.org initiated by an applicant named Aman Minhas has gained over 500 signatures since it was launched on the date the government opened its online form.

Minhas called the sponsorship process a “joke” and that a university student “could design a better system”.

He said he was able to access the form and fill it out in five minutes but the system closed as soon as he clicked submit.

The petition contained his message to Canada Prime Minister Justin Trudeau stating his administration had given false hopes to the program’s subscribers, that the scheme has been the same for years.

“This is not fair at all for people who (have been) trying for years. People feel cheated by the government. The system (has been failing) three years in a row and every year the government claims to improve the system but the system is still the same,” the petition read.

The petition called on the government to re-open the sponsorship process to give the remaining applicants a fair chance.